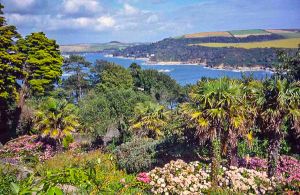 Overbeck's Museum and Garden
Eccentric inventor Otto Overbeck lived at Overbeck's from 1928, and the Edwardian house contains his collection of curios and inventions. Surrounding the house is a sheltered subtropical garden, stretching to seven acres and offering wonderful views over the estuary.

The first building on this elevated site overlooking Salcombe was a villa called Sharpitor, created by a local builder. In 1901 the property was purchased by Edric Hokins, who also bought 2 acres of adjoining land and began to create an exotic garden, laying out terraces and bringing in unusual and rare subtropical plants.

In 1913 the property was bought by the Vereker family, who tore down the original villa and built the current Edwardian house. During WWI the house was a convalescent home for soldiers. Otto Overbeck bought the house in 1928 and stayed here until his death 9 years later.

He left the property to the National Trust, asking that it be used as a museum, public park, and youth hostel. His wishes were accepted, and today half the house is used as a hostel, with the other half open to visitors as a museum.

The collections at Overbeck's are a mixture of peculiar and fascinating objects, many collected by Overbeck but quite a few invented by the brilliant scientist. See stuffed animals, toys, dolls, fossils, butterflies and insects, model ships and objects covering local maritime history.

The most remarkable of Overbeck's inventions is 'The Rejuvenator'; a machine that applied small electrical current to the body, through a series of electrodes. Overbeck claimed that his Rejuvenator helped restore correct electrical balance to the human body and could cure all manner of illness. The money he made from sales of the Rejuvenator helped fund his purchase of the property here, and indulge his passion for collecting.

Another treat is the huge polyphon, a music box that played discs punched with holes, much like a combination of a player piano and a very early jukebox. Discs of popular songs are played frequently when the house is open.

Another interesting feature is a collection of early 20th century photos of Salcombe and area taken by a local photographer named Edward Chapman. The photos have been printed from the original glass plates by the photographer's son and grandson, who continue the family photography business.

Look for the room at the centre of the house reached through a secret door.

The gardens surrounding the house are worth a visit on their own, with unusual subtropical plants enjoying the sheltered location. See olive trees, banana trees and palms, and enjoy fabulous views towards Salcombe and the nearby coast. Keen gardens will find inspiration, but even if you don't have a green thumb you'll enjoy the wonderful views.

More self catering near Overbeck's Museum and Garden >>

More bed and breakfasts near Overbeck's Museum and Garden >>