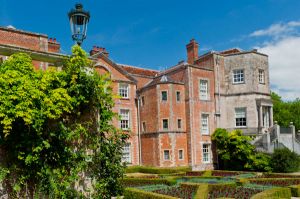 This 12th-century Augustinian priory was converted into a private house after the Dissolution and still retains the spring or 'font' from which its name is derived. The abbey contains a drawing-room decorated by Rex Whistler and Derek Hill's 20th-century picture collection.

In 1201 William Briwere founded a priory at Mottisfont for Augustinian canons. The canons were not isolated from the rest of the world like the Cistercian order, but went out into the world to preach and minister to those in need. Briwere was a wealthy businessman, an able administrator, and served no less than 4 kings.

The new priory at Mottisfont became a popular stopover point on the pilgrim's route between Salisbury and Winchester. The appeal of Mottisfont was enhanced by the presence of a holy relic; a forefinger of St John the Baptist. St John must have quite a few hands, for there were numerous forefingers scattered throughout Europe at that time!

Mottisfont grew in prosperity, and by the 14th century there were a pair of water mills, 2 gardens, and apple orchard, a tannery, a rabbit warren, and 2 dovecots on the estate. The coming of the Black Death in 1348 brought an end to this period of prosperity. Many of the monks were killed, and the priory had to appeal to the Pope for aide. The Black Death was followed by an earthquake which destroyed priory buildings. To the canons it must have seemed like their world was under attack. 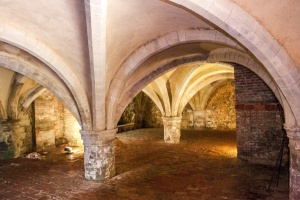 The community struggled on until the Dissolution, and the last canon left in 1536. Henry VIII gave the Mottisfont estate to William, Lord Sandys, his Lord Chamberlain. There was a catch to the gift however; Henry wanted the outer London village estates of Chelsea and Paddington in exchange.

Lord Sandys had little choice but to agree to the exchange, and the king's order to build a new house from the priory ruins.

Sandys built a great Tudor mansion, but rather than tear down the priory church, he chose to leave it intact and build his new house around it, enclosing the entire building. That is why the house we see today reveals so many medieval features, despite subsequent remodelling. Much of Sandys' Tudor house was swept away during an 18th century renovation, leaving us with the elegant red brick house we see today. 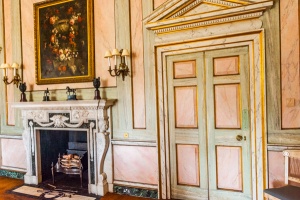 From 1684 Mottisfont was owned by the Mill family, who transformed the earlier house, added a three storey extension, with a long gallery and wings leading to terraces on each side.

Sir Richard Mill was responsible for most of the rebuilding, and he was also the man who gave Mottisfont its moniker of 'Abbey'. It made the house sound a bit more romantic, but it was inaccurate, for Mottisfiont was never a full-fledged abbey.

During the 1930s Mottisfont was at the centre of an artistic circle of painters, writers, and designers, invited here by the last owner of he house, Maud Russell. People like Ian Fleming, and Rex Whistler visited Mottisfont, and admired the Russell collection of modern art, including works by Picasso, Degas, and Modigliani.

Maud Russell did not just buy art, she modelled for paintings by Matisse and Orpen, among others. She modelled for - and had an affair with - sculptor Boris Anrep, who designed the mosaic angel on the south lawn in her honour. In 1939 Rex Whistler was called upon to paint the entrance hall in a Gothic trompe l'oiel pattern. It was Whistler's last work before he was killed in action in France.

Maud Russell transferred ownership of Mottisfont to the National Trust but continued to live in the house until the 1970s.

The house is a delight, and you can still see parts of the medieval priory, including the 13th century vaulted cellarium. The gardens are a wonderful mix of formal and informal, with the River Test running through the grounds. There is a lovely walled garden with colourful borders, and a ng avenue of lime trees. The gardens are wonderful for Autumn foliage and for snowdrops in early Spring. 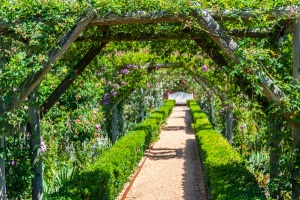 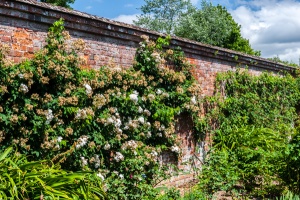 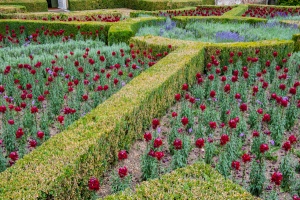 A formal garden bed beside the house

Garden: The National Collection of Roses calls the grounds of this 12th-century abbey home. The estate includes Mottisfont village and surrounding farmland and woods. The park features the largest London plane tree in England, plus small formal gardens. 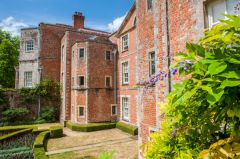 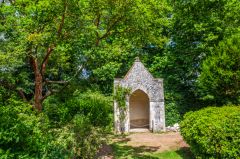 More self catering near Mottisfont Abbey >>