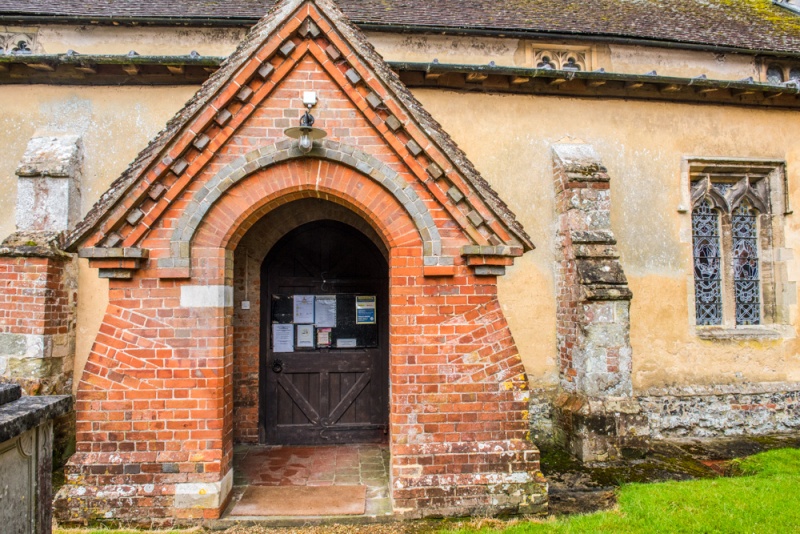 The village of Broughton sits in Hampshire's chalk downland, in the valley of the Wallop Brook. The church of St Mary has served the village since at least the 11th century.

That early church consisted of a nave and chancel, but no tower. You can still see evidence of early stonework in the exterior quoins on the south side of the church.

In the late 12th century a north aisle was added by piercing through the wall. A south aisle was added shortly after, around 1210. The nave was lengthened in 1220, when the large west door was added. In the 15th century the west tower was built, and the doorway inserted in its west wall. On either side of the doorway are 15th-century niches. The top section of the tower was added in 1830 and you can clearly see the different styles and materials between the top and lower parts of the tower.

The church was badly damaged by a fire in 1635. You can still see darkened stonework in the tower and north aisle, and burn marks on the north arcade arches and capitals.

The chancel arch is Victorian, in Early English style, which the exponents of Victorian Gothic considered the most 'English' of all medieval architecture. The east window is Victorian, and contains glass by the eminent designer CE Kempe. The pews are 19th century, but contain panels from 17th century pews. There are several very good grave slabs set into the floor, including one to Henry Grey (d. 1719). Over the west door is an early 19th century benefactors board.

On the south side of the sanctuary is a 15th-century pillar piscina. The central pillar supports an octagonal bowl carved with roses. Below is a fascinating carving of three figures. One is a devil, who appears to be catching a man in a noose. Unfortunately, when we visited, the chancel was roped off and alarmed, so we could only get a glimpse of the piscina and a distant photo over the choir stalls.

Behind the side altar - which thankfully we could see - is a triptych. The centre panel is Dutch, and was painted in the late 15th or early 16th century. On the south wall is a monument to Christopher Hearst (d. 1647) with an inscribed slate central panel bordered by a stone frame. On the north wall is a 1625 brass to Thomas Dowse and his wife. Above it is a memorial to Rev. Marmaduke Searly (d. 1830). The aisle roofs are 15th century. 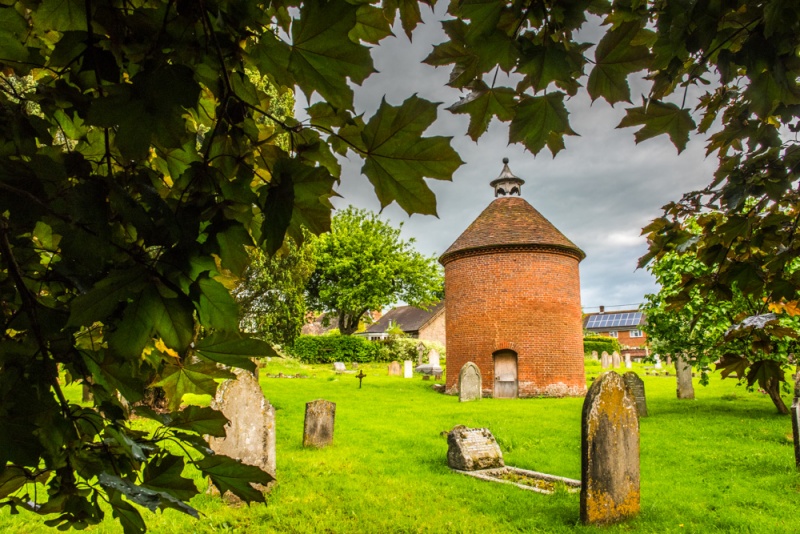 The 17th-century dovecote, or columbarium

Perhaps the most interesting feature is not in the church at all, but in the churchyard, where you will find a circular columbarium, or dovecote, dating to the 17th century. We know that there was a dovecote attached to the rectory in 1341, but the present building probably dates to the reign of William and Mary. It has a round base and a conical top surmounted by a lantern.

Dovecotes were not only practical, but they were also a sign of social status, and only those of a certain class were allowed by law to build them. The dovecote provided a roosting place for pigeons, which were a valuable source of meat, especially in winter. Their droppings were also used for fertiliser.

Also in the churchyard are several very good 17th-century gravestones. Near the south door is the tomb of Anne Steele (d. 1778), a famous hymn-writer. Curiously, the Steele family were Baptists, but it was the custom to bury all village residents in the parish churchyard.

St Mary's is a fascinating church, full of historic interest, set in one of the prettiest villages in this area of rural Hampshire. 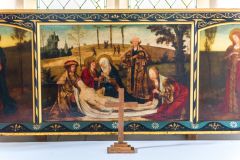 More self catering near Broughton

More bed and breakfasts near Broughton