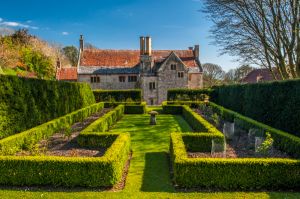 Set in a sheltered valley near the south coast of the Isle of Wight, Mottistone is noted for its colourful herbaceous borders, grassy terraces planted with fruit trees and its sea views. The gardens were established in the early 20th century but surround a beautiful Elizabethan manor house.

The house is tenanted and is not open to the public, but the extensive garden is open regularly, as is the larger Mottistone estate, with wood and downland walks leading to prehistoric sites.

Mottistone offers a mix of formal and informal, and a surprising mix of planting styles ranging from Mediterranean to a traditional tea garden. Below the manor house is a sunken walled garden, while above the house stone steps lead to a rose garden bounded by clipped hedges, while to one side is a long double herbaceous border.

Tucked behind the manor is a small olive grove and grassed terraces, while further up the sloping hillside are wild flower banks and an avenue of trees leading to an arbour seat at the top of the garden. The site is sheltered, and the variety of plants makes for a wonderful atmosphere, set off by the historic house. 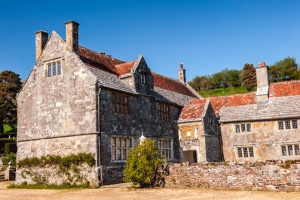 The Mottistone estate goes back to before 1300, when the Cheke family became lords of the manor. The Chekes lived at Mottistone until 1621, rebuilding the church across the road from their house.

The house was built on the foundations of a much earlier Saxon manor. The east wing was built in the 15th century and the west wing added a century later. In 1703 a storm caused a landslip which buried the rear of the house up to the level of the eaves. Rather than dig away all the mud and earth, the owners simply left it there.

For 223 years the rear of the manor was half-buried in earth. The manor became a farmhouse, the sunken garden was used as a farmyard, and rooms within the manor served as a farm dairy and storage areas.

Charles Seely purchased the house in 1861, and in 1921 the first Lord Mottistone, General Jack Seely, moved here, urged on by his friend, architect Sir Edward Lutyens, and began the process of restoring the house.

Beside the tea garden is this small wooden cabin raised on staddle stones. This small hut was used by John Seely, the 2nd Lord Mottistone and his architectural partner Paul Paget, son of the Bishop of Chester, as a combination home and office. The pair met at university and launched an architecture partnership in 1926. Their first commission was to restore and extend Mottistone Manor for Seely's father and this picturesque combination of office and cottage was where they worked and slept.

A waymarked trail between the garden and the car park leads through woodland, carpeted with bluebells in Spring, up the slope of the downs, through peaceful woodland, and emerges into the open at the Long Stone, a Bronze Age burial mound marked by a pair of stones. From the Long Stone another trail leads to Castle Hill, an Iron Age hillfort with superb views over the surrounding countryside. 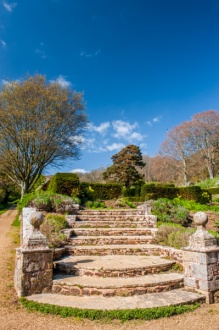 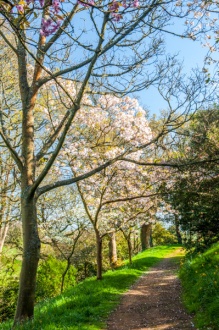 A wooded trail in Spring 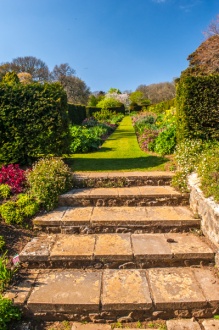 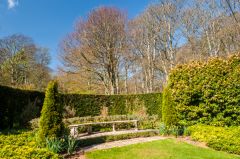 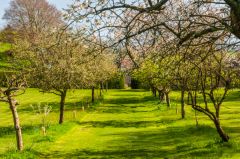 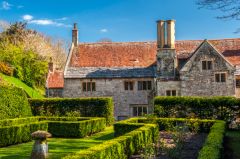 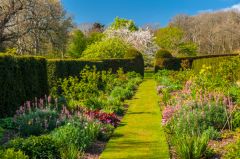 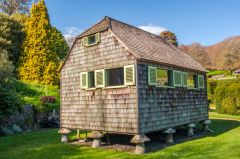 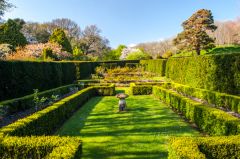 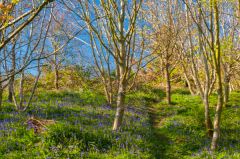