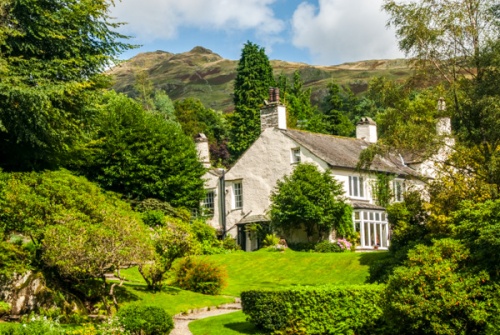 Rydal Mount was the home of poet William Wordsworth from 1813 until his death in 1850, and of his wife Mary until her death in 1859. The house dates to the 16th century, and the interior features many of Wordsworth's personal effects, furniture, and mementoes. The house was purchased by Wordsworth's descendants in 1969 and is occasionally still used by the family.

The house is located at the end of a steep lane above the main A591 road out of Ambleside. There is very limited parking available at the house itself, though there is some on-street parking on the lane that leads to the house.

Part of the charm of Rydal Mount is the lovely garden in which it is set. Directly before the main entrance to the house is a mound believed to have been used as early as the 9th century as a look-out post. Stretching out to the north of the house are several informal terraces, including Dora's Terrace, which was only rediscovered quite recently.

Dora's Terrace was named for Wordsworth's daughter, as was Dora's Field. This was purchased by Wordsworth when he fell out with his landlady, Lady Diana le Fleming. Wordsworth anticipated having to leave Rydal, so he bought land next to the house, intending to build his own house there.

However, he patched up his differences with Lady le Fleming and scrapped his building plans. He then gave the property to his daughter, Dora. When she died, he and his wife Mary, planted Dora's Field with daffodils as a sign of remembrance. At the top of the garden is a rustic summerhouse built by Wordsworth. It is easy to imagine him looking out across the gentle slope of the garden to Rydal Water below. 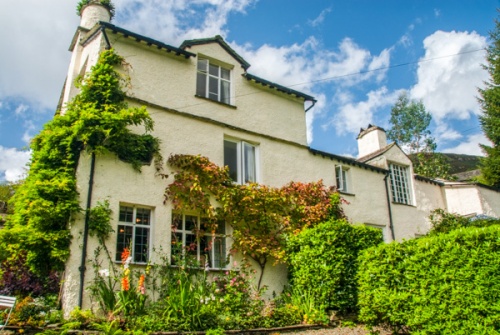 The east side of the house

Though Rydal Mount has long been associated in public memory with Wordsworth, it is worth pointing out that the poet never actually owned the house; he rented it for all of his 37 years in residence here.

The whole, he felt, should be informal, and as harmonious as possible with the natural surroundings. Among the many species planted about the garden are roses, cypress, magnolia, azalea, hydrangea, enkianthus, holly, clematis, and actinidia, among many others! The gardens are not overwhelming, but quiet, and peaceful, and there are very nice views out over the lake through carefully arranged gaps in the trees.

The house has 8 main rooms open to visitors. These include, on the ground floor, the Dining Room, Drawing Room, Library. The official Rydal Mount brochure recounts an amusing anecdote about the latter.

It seems that Wordsworth's servant was showing a visitor around the house. When they came to the Library, he said, "This is my Master's library, where he keeps his books; his study is out of doors." In the Library is a bookcase owned by Wordsworth. It was later purchased by Canon Rawnsley, co-founder of the National Trust, and is now back in the possession of the Wordsworth family. 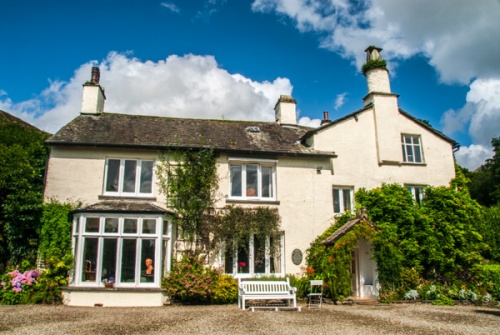 The original house at Rydal was made up of just three of the current rooms; the Dining Room, and Dora and Dorothy's bedrooms. All the other rooms were added on later. Another original feature of the house is a mullioned window set in the east wall. This window was for many years hidden beneath whitewash. It was only during repairs to the house in 1979 that the hidden window was discovered. Why was it covered up for so many years?

The answer lies in government taxation. In the latter years of the 18th century, the government introduced a tax on windows as a way to finance the Napoleonic Wars. Taxes were assessed on a sliding scale so that houses with more windows had to pay more than houses with fewer windows.

The taxes were so high that many homeowners chose to cover over windows rather than pay the tax. We can safely assume that the hidden window at Rydal Mount was covered over to avoid taxes.

The house is full of objects owned and used by Wordsworth and his family. Among the furniture is the poet's favourite chair, a 'cutlass chair', with a curved arm built to allow men who wore a sword on either side to sit comfortably.

There are so many objects on display that it is difficult to pick out one or two for special mention. Upstairs, in Wordsworth's Study, is a sword belonging to the poet's younger brother, John, who was the captain of the 'Earl of Abergavenny'. The ship sank, and John lost his life. The sword was recovered from the wreckage.

In William and Mary's Bedroom is a framed letter from Wordsworth to Queen Victoria, in which he declines the post of Poet Laureate. The queen persisted, however, and Wordsworth was eventually persuaded to accept the post, but only on the condition that he was not required to write so much as a single line of verse for Her Majesty. Wordsworth is the only Poet Laureate ever to be afforded this privilege.

Rydal Mount does not get the number of visitors as nearby Dove Cottage, in Grasmere, but it well repays a visit. It is a lovely house, and the gardens are worth visiting on their own. Do take the time to walk to Rydal Falls (bring good waterproof footwear). 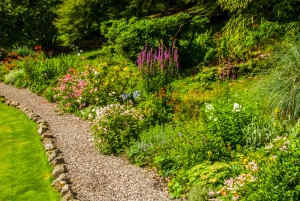 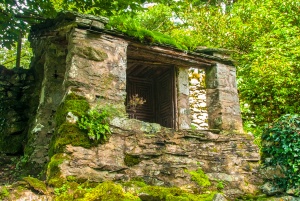 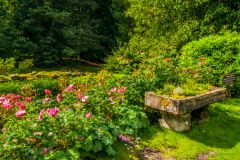 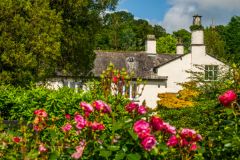 More self catering near Rydal Mount >>