HERITAGE HIGHLIGHTS:   William Wordsworth is buried in the churchyard 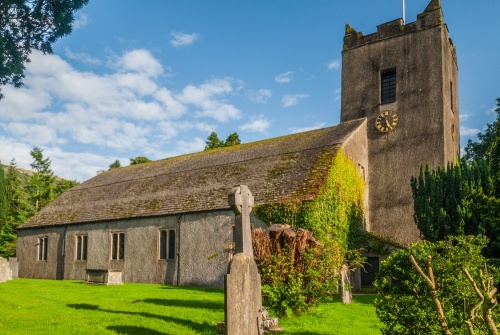 St Oswald's Church has graced the pretty Lake District village of Grasmere since at least the 13th century, but it seems likely there was a church here long before then. The church stands in an idyllic location beside the River Rothay.

Tradition says that the church was begun in AD 642 when St Oswald, the Christian King of Northumbria, found the local pagan residents worshipping by an oak tree. He cut down the tree and made an altar from it. He then built a simple church on the spot, probably made of timber. Even if the story is true, there is no guarantee it was in the same spot.

We are on firmer historical ground when it comes to the 13th-century church, and records show that there was a rector in 1254, when the church was part of the York diocese. From 1396-1538 St Oswald's was administered by St Mary's Abbey in York. 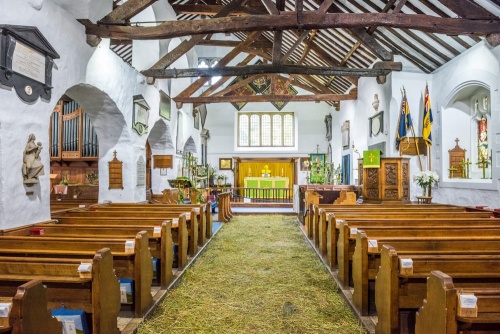 The church interior, strewn with rushes

The church has been heavily remodelled, but some fragments of the 13th-century building remain, including a carved head above the chancel.

The plainly decorated west tower is built with stones quarried from the bed of the nearby River Rothay. The walls are four feet thick in places. The only decoration on the tower exterior is a clock installed in 1897 to mark Queen Victoria's Diamond Jubilee. Under the tower is a worn 14th-century font, possibly brought here from St Mary's Abbey. Against the tower wall is a parish chest built in 1563.

The nave dates to the 13th century and is linked to a north aisle added around 1490. The aisle began as a chapel of ease for the residents of Langdale and is now known as the Langdale Aisle. It was originally a completely separate building with its own roof. 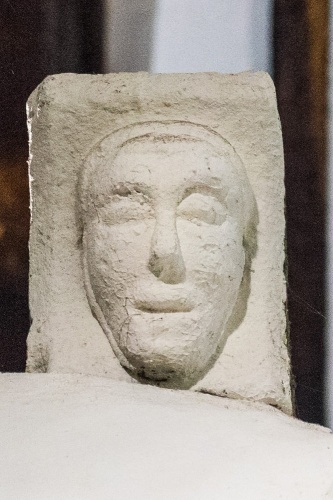 A 13th-century carved head in the chancel

The chapel roof and the nave roof met in a gully between the buildings, which predictably led to water accumulation and rotting timbers. In 1562 John Benson of Baisbrown left money to join the two buildings under one roof. A third roof was built over the existing two roofs, creating a unique network of roof beams that Wordsworth described as:

'the roof upheld
By naked rafters intricately crossed,
Like leafless underboughs in some thick wood,
All withered by the depth of shade above' 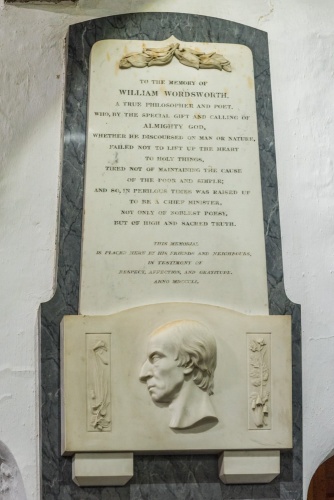 The church boasts some interesting wall tablets, including a memorial near the lectern to Sir John Richardson, who sailed with Sir John Franklin on his Arctic voyages. Richardson served as the Surgeon General of the Royal Navy and was responsible for the introduction of anaesthetics.

Above the chancel stalls is an understated memorial plaque to the poet William Wordsworth, who lived at nearby Dove Cottage and is buried in the churchyard. The memorial was designed by Thomas Woolner and was intended for Westminster Abbey. Wordsworth, however, asked to be buried in Grasmere. His friends bought the memorial from Woolner in 1851 and installed it in the church.

A few steps away in the sanctuary are a pair of minister's seats, one built in 1677 and the other in 1703. High on the wall are a trio of funeral hatchments bearing the arms of the Fleming family. The Flemings (aka Le Fleming) lived in Rydal and owned the patronage of Grasmere from 1580 into the 19th century when they gifted it to Queens College, Oxford.

On the wall is a worn cupboard door made from a medieval church door. Near the font is a framed offertory bag used in St Oswald's Church for over 200 years. Sometime before the First World War a local clergyman took it to New Zealand and gave it to a member of the Le Fleming family who had emigrated. It was used in Manaia Parish, New Zealand until 1950 before being returned to Grasmere. It is well over 250 years old. 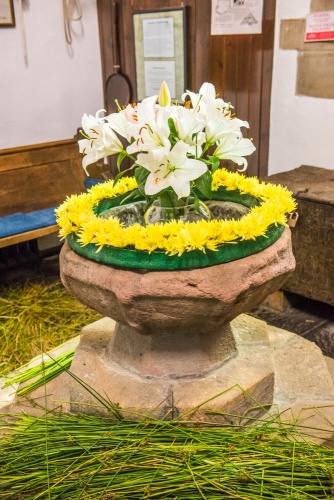 St Oswald's Church is worth visiting in its own right, but most visitors come to see the grave of the romantic poet William Wordsworth, who lived in Grasmere and is buried in the churchyard along with his wife Mary, his sister Dorothy, his brother John, and his children, including his daughter Dora Quillinan.

Here you will also find the grave of the artist William Green, whose epitaph was written by Wordsworth. The Wordsworth group of graves are well-marked and easy to find.

Near the path to the lych gate is the grave of Sarah Nelson, who invented the popular Grasmere Gingerbread, which is still sold in a shop located in the old schoolhouse a few steps from the churchyard.

Eight of the yew trees in the churchyard were planted by William Wordsworth. A more modern feature is the Wordsworth Daffodil Garden, created in 2004 as a wild garden on land owned by the church that was deemed unsuitable for burials. 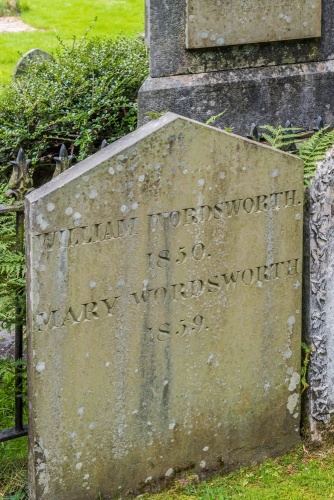 In medieval times most churches had floors of packed earth. To keep the building relatively clean, warm, and sweet-smelling, the earthen floor was strewn with rushes (long grasses). The old rushes were replaced each year with new ones, often in a ceremony involving a procession through the village.

When church floors were eventually paved with stone, there was no longer a need for rushes, but in a few places, the annual rushbearing ceremony survived. In Grasmere, the ceremony takes place on the Saturday nearest to August 5th, St Oswald's Day. Children carry rushes through the streets of Grasmere to the church.

Rushes are strewn on the floor and woven into decorations such as large hoops which are used to decorate the church interior.

Part of the ceremony involves the Rush Sheet, a large piece of linen cloth woven in 1890 by Ann Fleming of Knott House Farm in Grasmere. The sheet is carried by the six village handmaidens to the church, where it is hung on the Fleming family pew. The pew was installed in 1633 by Sir Daniel Fleming and was used by the Fleming family until Rydal Church was erected nearer their home in 1827. 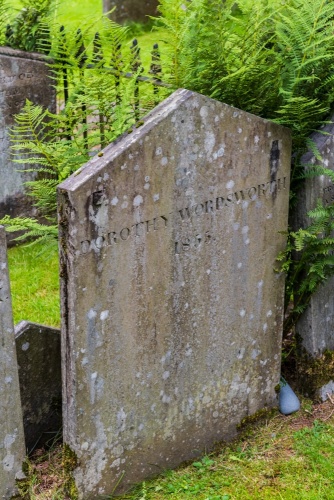 St Oswald's Church is very easy to find. It stands on Church Stile, a stone's throw from the main visitor car park. The church is open most days to visitors and is well worth a visit, especially if you come after the rushbearing ceremony when the church is bedecked with rushes and decorations woven from straw. 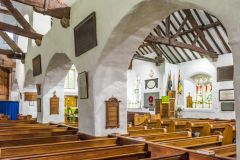 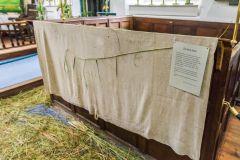 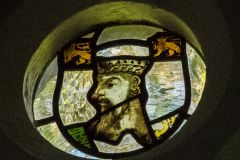 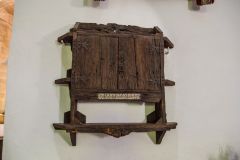 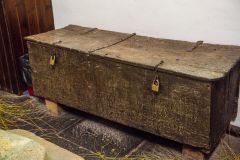 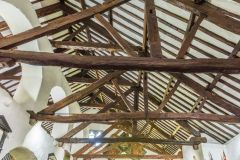 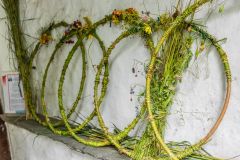