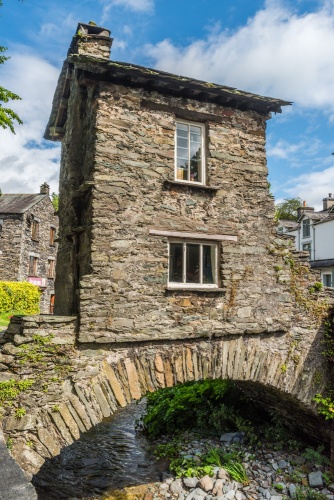 Ambleside, at the heart of the southern Lake District, is beautiful but busy. Its scenic setting, one mile north of Lake Windermere, guarantees its popularity. Grey stone houses, B&B's, hotels, galleries, and shops catering to tourists abound. It is also a popular centre for walking, with outdoor equipment shops and outfitters catering to outdoor activities.

One would never guess from looking at its pleasant aspect today that Ambleside's past was partly industrial. Charcoal, used in the smelting of iron ore in Furness and west Cumbria, was made here. Timber for the bobbin mills was another product of the area. Machine tool manufacture, quarrying, and mining were all part of the picture. Local slate and stone are still used for buildings. 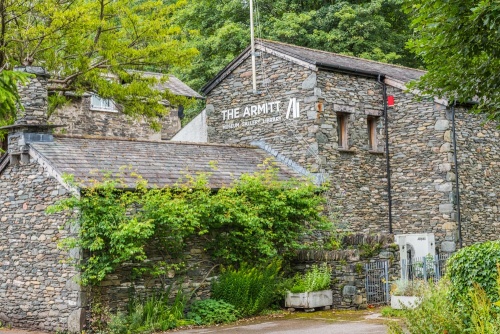 The Romans found Ambleside an appealing location. They built Galava fort on Waterside in AD 79. You can still see the excavated remains of the principia (administrative centre), the praetorium (the general's residence), and the granary in a beautiful lakeside location. The Vikings settled here and local placenames still show their influence, but it wasn't until the advent of the railroad, in Victorian times, that large numbers of tourists were able to visit.

Inexpensive rail fares brought hordes of people to the Lake District, and Ambleside's popularity was assured. Charles Dickens was one tourist who didn't like all the other visitors and said so. 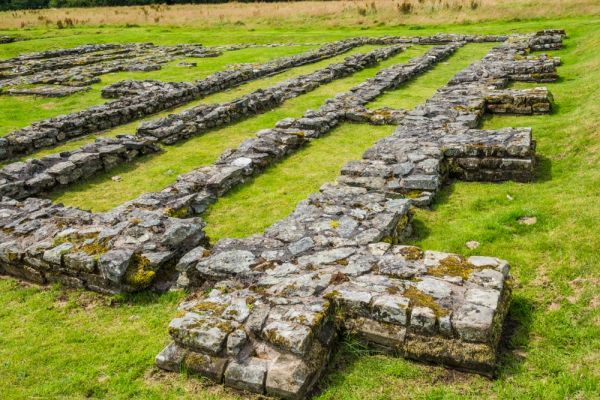 The most iconic building in Ambleside is the 17th century slate-roofed Bridge House, so called because it is perched over the narrow Stock Ghyll. One room up and one room down, it's hard to imagine that a family once lived here, but they did. Author Beatrix Potter visited when Bridge House was still a shop in the 1920s, and became determined to help preserve the historic building. The National Trust, which Potter helped establish, now preserves Bridge House.

Why build a house directly over a river? One rumour has it that a Scotsman built it over the river to avoid land taxes. Still another story says it was built as a summerhouse for the former Ambleside Hall or as storage for their apples. There's a charming tearoom just down the street and over a little bridge.

Lake Windermere presents an inviting aspect. Explore it by hiring your own rowboat or go on a launch trip from Waterhead, one mile south of Ambleside.

Stroll the walkway along the friendly harbour, home to ducks and swans. Landscaped gardens and park benches add to the ambience. 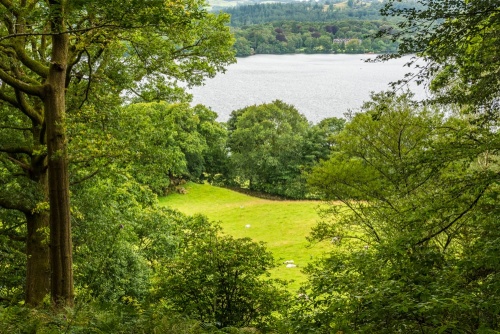 One charming piece of local history is the annual Rushbearing Ceremony, which dates back to medieval times when rushes were used to cover church floors. Dirt and debris lay on the floor until, once a year, the rushes were changed.

In a procession on the first Saturday in July children parade through the village carrying rushes and flowers to celebrates this ancient custom. A mural of the ceremony is on display at the Gothic Revival style St Mary's Church (1850-54). You can't miss the sandstone church's 180ft. (55m) spire, which soars over the village's shops and houses.

Other interesting events in the area are the sheepdog trials that take place in Rydal Park in August. In the same month fell runners come out in full force to compete in an arduous race. Indeed, fell walking, not running, is a popular year-round pastime.

The poet William Wordsworth and his sister used to walk into Ambleside from Grasmere to get their mail. When Wordsworth was Distributor of Stamps for Westmoreland (1813), he had his office in Ambleside. Southeast of the village at Jenkins Crag (730ft-230m), there are views of the village and the hills. Immediately outside the village is Stagshaw Garden, a woodland garden on a steep hillside contains rhododendrons, azaleas and camellias. From the garden, a circular walk leads through the National Trust's Skelghyll Wood, planted with champion trees during the Victorian period. A short walk from Ambleside's centre is the location of the 70ft. (21m) waterfall, Stock Ghyll Force, which used to power several mills. One is the former Corn Mill, on a site where there was a mill as early as 1335. To reach the waterfall take Stockghyll Lane immediately off the Market Place and follow the signs uphill and through pleasant woodland, a walk of about 15 minutes.

You can learn more about Ambleside's heritage at the Armitt Museum on Rydal Road. The museum holds a wealth of information on Beatrix Potter including personal mementoes, letters, and drawings including a series of exquisite watercolours donated by the author, who was one of the museum's earliest supporters. The museum recently acquired an extremely rare Potter first edition of 'The Fairy Caravan', published in 1928. There is a large library of books on the Lake District and objects found during excavations at Galava Roman Fort.

North of Ambleside is Rydal Mount, home to William Wordsworth from 1813 until his death in 1850. It is little changed since that time and houses memorabilia of the poet. There are beautifully landscaped gardens and a walk on the property. The view over Rydal Water is said to have inspired Wordsworth's poetry.

Winter or summer, busy or quiet, Ambleside charms. Whichever way you turn, the beauty of the Lake District surrounds you. 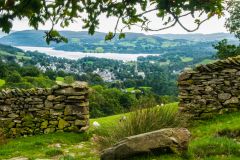 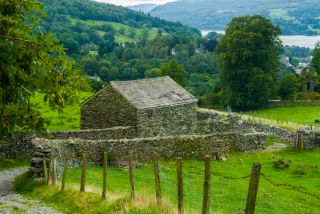 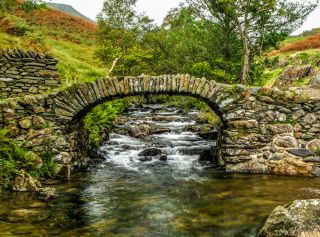 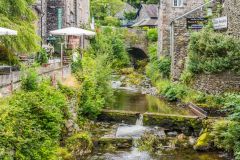 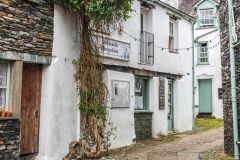 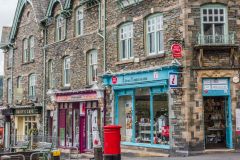 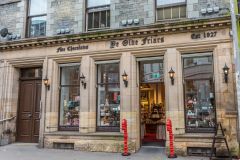 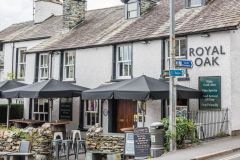 More self catering near Ambleside

More bed and breakfasts near Ambleside