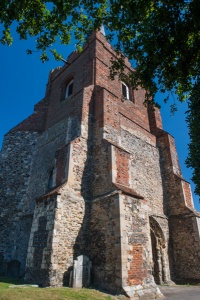 It seems very likely that there was a timber church here on the shore of the River Blackwater in the Saxon period, though that building was probably destroyed by the victorious Danes after the Battle of Maldon in AD 991. Remnants of 7th-century pottery and postholes in the churchyard are all that remains of the Saxon church, and the building we see today is Norman, built around 1130.

The original tower of St Mary's was built in 1300, and throughout the medieval period it served as an invaluable aid to navigation on the Blackwater. During the medieval period, a beacon fire was lit atop the tower to guide ships.

So important was the tower to local navigation that when it collapsed in 1605 the townsfolk petitioned King James I to rebuild it, but the rebuilding was not complete until 1638. In 1740 the striking shingled spire was added, and this still serves as an aid to navigation on the river. 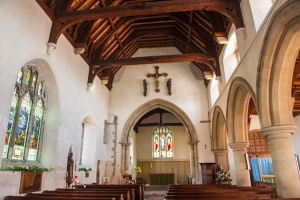 St Mary's has undergone so much rebuilding over the ensuing centuries that very little of the Norman church remains, save for a small Norman window high on the western end of the north wall, and masonry foundations on either side of the chancel arch. The arch itself is a Victorian rebuilding of an earlier 14th-century arch erected when the Norman arch fell down.

You enter through a 15th century north porch, with a very fine timber roof. The north chancel window is 15th century, though the glass is from 1920, inserted as a memorial to WWI dead. Beside the 15th century are a series of three small niches discovered during renovations in 1885.

Set into the thickness of the wall are early 16th-century rood stairs, which once allowed access to the top of the rood screen. The screen is long gone, a victim of the Reformation, but at the base of the stairs are original medieval heraldic tiles.

Near the rood stairs is a memorial to John Fenne (d. 1486). Fenne was a merchant from Calais, emphasising Maldon's role as an active trading centre during the medieval period. 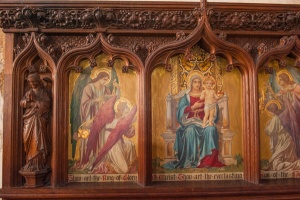 The pulpit is Jacobean, brought here from the redundant church at Mashbury. One very attractive feature is a series of carved and gilded angels decorating the roof of the south aisle chapel. There are 3 similar angels in the nave, all brought from Plaistow church when it closed.

One of the most striking features of St Mary's is one of the most recent; you might say it isn't historic at all, except that it commemorates the most important event in Maldon's history. this is the dazzling glass window in the south aisle, designed by Mark Angus in 1991 to mark the millennium of the Battle of Maldon.

The glass depicts the traditional last words spoken by the Saxon leader Byrhtnoth as he lay dying on the battlefield. By the tower door is a richly coloured reredos which formerly stood behind the altar. It was designed by Wykeham Chancellor in 1914 and is strikingly painted in a Pre-Raphaelite style reminiscent of Edward Burne-Jones.

Because of its location so close to the Hythe, Maldon's port area, St Mary's was traditionally known as The Fisherman's Church. Its a very attractive building, and if there aren't a plethora of historic treasures within, the location is wonderful! St Mary's is usually open during daylight hours and welcomes visitors. As the church website proudly proclaims, 'the view of St Mary's from the Blackwater is still the iconographic image' of Maldon.

For more on what to see in the area see our overview of local history and attractions in Maldon. 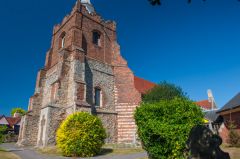 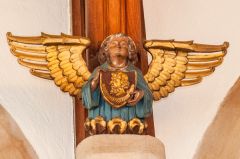 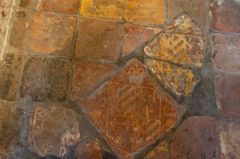