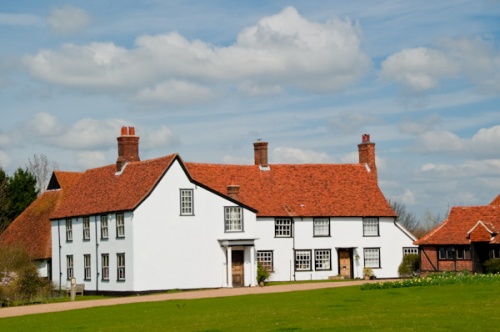 The Farmhouse at Cressing Temple

The Knights Templars were a 12th-century military order of monks whose stated purpose was to protect travellers to the Holy Land, but they quickly established estates around Europe and received large tracts of land from monarchs and wealthy nobles.

Cressing Temple was the first rural estate granted to the Templars in Britain and the name reflects that Templar connection. The estate is remarkable for two extraordinary 13th-century timber barns which are among the finest in Europe. There are also numerous other medieval buildings and a Tudor walled garden.

During the late Saxon period, Cressing Temple formed part of the Witham estate, owned by Earl Harold, son of Godwin. Harold is best known as the Earl of Wessex before he was crowned King Harold, but he was also Earl of Essex and held vast estates throughout the county.

After Harold's death at the Battle of Hastings, William the Conqueror granted the estate of Witham to Count Eustace of Boulogne. From Eustace, it passed to his daughter Matilda, wife of King Stephen. Matilda detached the Cressing lands from the Witham estate and in 1137 she granted Cressing to the Templars. Stephen later added the entire Witham estate to the initial grant. 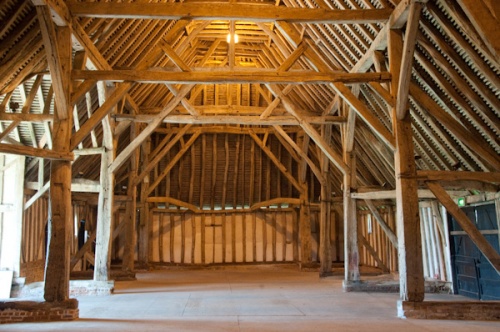 By 1300 the Templar estate stretched to 2000 acres and included 5 mills, with the important (and lucrative) right to hold an annual fair. An inventory of 1313 describes a large number of buildings, including a bakeshouse, larder, dairy, brewery, granary, pantry, kitchen, chapel, and smithy. The only surviving elements of this large and bustling agricultural estate are the two barns and a stone well.

The Templars were suppressed in 1312 in England, and their estates transferred to the Knights Hospitaller. (after Edward II had sold their stores and stripped their estates of tangible goods). The Hospitallers revived the Cressing estate, and in 1335 it was recorded with 600 sheep and 32 cattle, supporting a steward, 5 chaplains, 2 pages, 3 servants, and 2 lads.

At the time of the Peasants Revolt in 1381, the Master of Hospitallers in England was Sir Robert Hales, who also served as Treasurer to Richard II. Hales was in London, but he had a manor at Cressing, and when the peasants rebelled against the imposition of a harsh poll tax in June 1381 they seized the manor, burned documents, and tore down the building.

Thankfully they left the barns and other buildings untouched. Hales himself was not so fortunate; he was killed by the rebels at the Tower of London before the revolt was quashed. 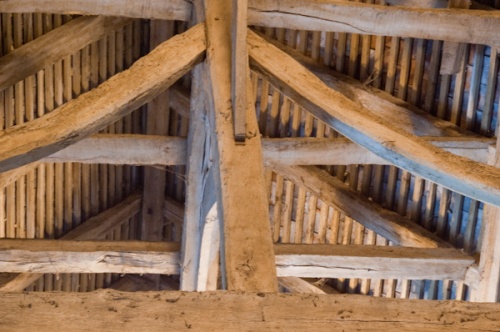 Around 1420 the Hospitallers repaired the great barns at Cressing and erected several other new buildings on the site. The Hospitallers later leased out parts of the estate rather than farming them directly.

At the time of the Dissolution of the Monasteries, Cressing Temple was leased by Sir John Smyth, a Baron of the Exchequer, and this lease was confirmed by Henry VIII. The Smyth family built a late 16th century manor house with a walled garden to the north of the house. This walled garden has now been recreated in something approaching its original form.

In 1623 William Smyth built a granary and remodelled the 'Great House'. The estate passed to the Nevills by marriage, then through a series of owners until it was acquired by Sir Thomas Davies, a former Lord Mayor of London. Davies' eldest son committed suicide at Cressing Temple, a sad event which may account for tales of a ghost associated with the estate.

The manor house was demolished in the early 18th century and Cressing was leased to a series of tenant farmers. Beside the Farmhouse is the Cullen Garden, named for the last private owner of Cressing Temple, Frank Cullen.

Cullen was a successful seed merchant and was responsible for developing new varieties of sweet peas and cabbages.

After Cullen's death the estate was divided and the historic farm buildings were purchased by the Essex County Council, who restored the site and opened it up to visitors. 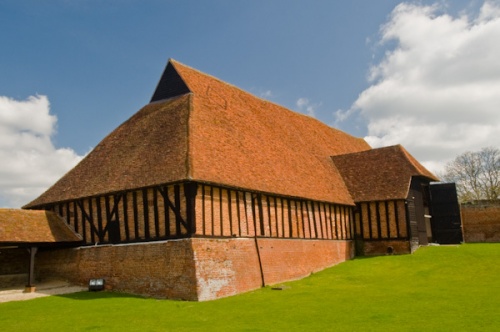 The main attractions at Cressing are the two huge 13th-century barns built by the Templars. These follow roughly the same layout, with an aisled interior and creative use of bracing to support a heavy tiled roof over a large area.

The original tiles were larger than those we see today; it took about 45,000 tiles to cover each roof and each roof weighed roughly 55 tonnes. Both barns were built from locally grown oak, shaped when green for ease of working the wood, then allowed to season whilst in place in the building.

Each barn is built using multiples of the same unit of measurement; known variously as the rod, perch, or pole, which is just over 16 feet (5.03 metres). The design was carefully laid out in a repeating geometric pattern using pegs and a cord.

These exacting techniques are known to have been used in medieval cathedrals but their use in a vernacular building like the barns at Cressing just serves to emphasize just how important the barns were and how much care was taken in their construction.

The oldest of the two major barns is Barley Barn. Tree-ring dating suggests that it was constructed between 1205-1235. It stretches 118 feet and is 45 feet wide, with 5 equal bays and a half bay at each end. In the 1420 Hospitaller rebuilding, the structure was shortened and narrowed. The roof was rebuilt on a crown-post model in the 16th century. One intriguing theory is that the barn was not built where it now stands, but was brought here from elsewhere on the Cressing site after the riots of 1381. 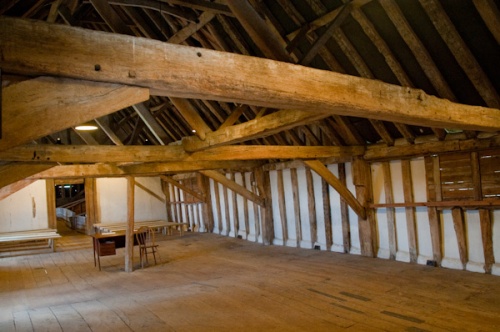 Built about 50 years after Barley Barn, Wheat Barn was created with trees felled between 1257 and 1280. The posts supporting the roof structure were placed directly into the ground or on stone bases. Obviously construction techniques had evolved in the time since Barley Barn was built and the joints between the posts and braces are more complex and include secret notched-lap joints. The western side wall was rebuilt in the 15th century when a large porch was added, and the studs placed more closely together.

The walls were originally faced with boards, but in the 16th century the boards were replaced with bricks. By this time the original soleplates (the timbers that the whole structure rested on) were rotting away, so the barn was raised up on a brick plinth. Over the next few centuries, more braces were added to arrest sagging. During the Victorian restorations, several of the workmen carved their initials and the date into the timbers.

A two-storey early 17th-century timber-framed building erected by William Smyth, with 10 bays. Later adapted for use as a malting house, it is one of the earliest maltings in the county. In the 19th century, it was converted for use as a stable and chaff room. It is also known as The Old Court Room due to its later use for this purpose. 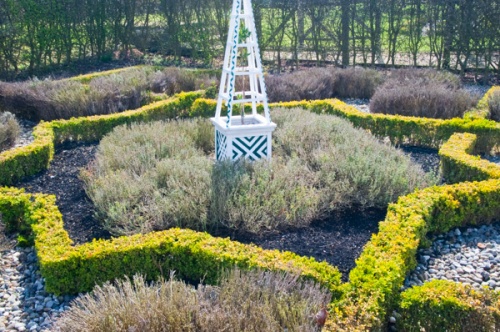 Other buildings at Cressing include a Cartlodge, intended as a workshop and storehouse for agricultural machinery. There is an 18th-century barn, built with elm instead of the earlier oak.

There is also an attractive Farmhouse dating to the early 17th century, though much of the interior is Georgian. This Grade I listed building stands within a much-altered moat, though this feature has also been proposed as a series of ponds.

The garden has been painstakingly created to feature plants and designs known to be in use during the Tudor period. Plants are arranged according to their use, with clusters of medicinal plants, a potager garden, cooking herbs, and plants used for dying cloth. A special nosegay garden grows plants known for their scent, and there is a nuttery and small orchard.

One feature is an arbour planted to evoke Shakespeare's A Midsummer Night's Dream, with oxlips, woodbine, and roses in profusion. At the centre of the garden is a fountain with four spouts, each spout emerging from the mouth of a Green Man carving.

There is so much to see at Cressing, but I've concentrated mostly on the two Templar barns and the gardens, as these are the real showpiece places to visit on the site. I've been fortunate enough to visit many of the best-preserved medieval barns in England, including several others in Essex, such as Priors Hall and Coggeshall, and Great Coxwell in Oxfordshire.

The barns at Cressing Temple rank with the best of them; they are truly awe-inspiring examples of early medieval timber architecture. Add to that the number of other historic buildings on the estate and the entrancing Tudor garden and I'd have to say that Cressing Temple is one of the most enjoyable historic sites in East Anglia. 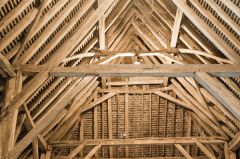 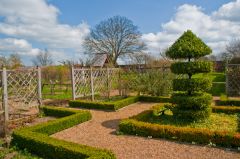 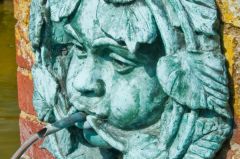 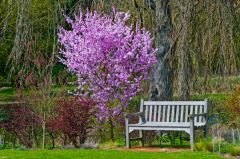