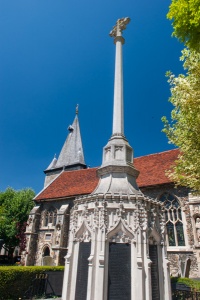 All Saints dominates Maldon's picturesque High Street; built of stone and flint, with a very peculiar triangular west tower. The tower sides are of equal length, making a perfect equilateral triangle plan, and the tower base is topped with a hexagonal spire with pinnacles at the corners, making a very striking sight. Why the odd layout? No one is really sure.

One theory is that the tower was made to fit in beside the nearby roadway, or that the triangular plan was meant to represent the Trinity.

Another feature of the exterior is a series of large statues set into niches in the south wall. There are six statues, each depicting a notable person associated with Maldon. From the west end we se a statue of Bishop Melitus, a companion of St Augustine, who first tried to convert Anglia to Christianity in the early 7th century. His mission id not las long, as he was chased from his diocese by the locals.

Next is St Cedd, 7th century Bishop of the East Saxons, whose cathedra was at Othona, (now Bradwell-on-Sea). If Cedd was a peaceful figure, the next local notable certainly wasn't; he is Brightnoth (Brythnoth), warrior hero of the Battle of Maldon in AD 991.

Then comes Robert Mantell, who founded Beeleigh Abbey, then Sir Robert D'Arcy, 15th century MP and builder of the D'Arcy Aisle within the church. The final statue represents Dr Thomas Plume, a 17th century benefactor who founded a library and workhouse, and left his fortune to charity. 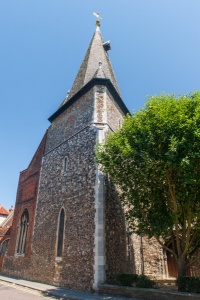 We do not know exactly when the first church on this site was built, but the first record dates to 1180, when it was mentioned in a charter of Richard I as belonging to Beeleigh Abbey. However, much of the current building dates from the 14th-15th century.

Perhaps the architectural highlight is the south aisle, with wonderful wall arcades which are among the best in East Anglia. These are beautifully carved, and decorated with small heads of saints and kings. There are two sets of sedilia (wall seats) which show the location of chapel altars.

Also look at the nave pillars, where one capital is carved with a worn depiction of a Green Man, vines flowing from his mouth.

The aisle was extended in the late 14th century by the Holy Trinity Guild. The chapel is better known as the D'Arcy Chapel, because it houses several memorials to members of the D'Arcy family. In the following century St Katherine's Guild paid for a matching north chapel. The medieval nave had to be rebuilt in the 18th century when St Peter's church nearby was declared redundant.

The subsequent influx of worshippers meant that All Saints needed more space, so part of the medieval structure was puled down in 1728 and replaced by a wide nave with galleries to accommodate a larger congregation. 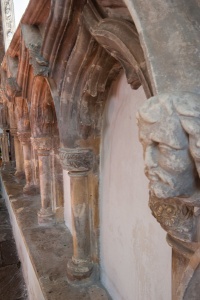 The Fat Man of Maldon

Among a number of interesting grave slabs set into the floor of the church is one to Edward Bright, known as The Fat Man of Maldon. Bright, who died in 1750 at the age of 29, was a tallow chandler (a candle maker) and grocer and according to the parish record of his death, he weighed over 42 stone (almost 600 pounds or 270kg). His coffin had to be moved on rollers and lowered into his vault with pulleys.

Local tradition suggests that 42 stone was a low estimate, the truth being closer to 44 stone (about 616 pounds). It was not his weight that killed him though; Bright was said to have died of typhoid fever.

A Tale of Love

Another notable monument is that of Thomas Cammock (1540-1602) in the north chapel. Cammock is shown clad in Elizabethan robes and a ruff, flanked by his two wives. Cammock was in the retinue of Lord Rich, whose successors became Earls of Warwick.

After the death of his first wife Cammock fell in love the Lord Rich's daughter Frances. Lord Rich disapproved of his daughter marrying an untitled man - and his employee, so the couple eloped. Lord Rich sent his son after them with a band of soldiers. 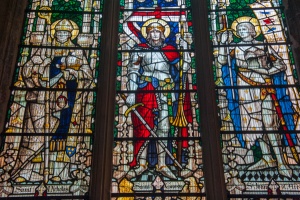 The couple reached Fambridge Ferry, across the river from Maldon, but the ferry boat was on the far bank. Thomas wanted to swim across to fetch the boat but Frances would not let him go alone, declaring that they would live or die together. So they both mounted the same horse and attempted to ford the river. The horse began to cross, then took fright and returned to shore, just as Frances' brother arrived.

Somehow the couple escaped and managed to cross the river to Maldon. Lord Rich gave in after hearing the tale of how his daughter had risked everything for her new husband, and forgave the couple, who lived in Maldon for many years and had 13 children together.

Thomas Cammock gave the town its first water supply, and died in 1602. His tomb shows all 22 of his children, by both his wives - enough, it has been pointed out, to field his own pair of cricket teams.

Other notable monuments include that of Henry Wentworth (d. 1614) and John Screvener (d. 1647). it is interesting to compare the ornate Screvener wall tablet to the simple painted board monument to John Stevens, who died in 1677.

In 1928 this large stained glass window in the chancel of the D'Arcy Chapel was dedicated to the memory of Laurence Washington, rector of Purleigh and the great-great grandfather of US President George Washington.

The window is a gift fro the citizens of Malden, Massachusetts, USA, which was founded by Joseph Hills and other natives of Maldon, Essex. The glass depicts the themes of Patriotism, Freedom, and Colonisation, and shows many American icons such as the Liberty Bell, the Landing of the Pilgrim Fathers, and the Statue of Liberty.

All Saints is a wonderful place ro visit, full of history, with intriguing architecture and tales of fascinating people. The church is usually open to visitors during daylight hours.

Nearest Accommodation to Maldon, All Saints:

More self catering near Maldon, All Saints

More Hotels near Maldon, All Saints

More bed and breakfasts near Maldon, All Saints