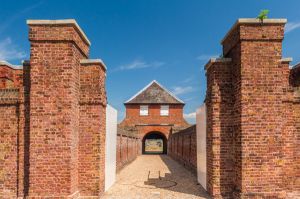 Guarding the Thames estuary from the time of Henry VIII through WWII, Tilbury Fort remains a stunning example of an artillery fort. The fort has an impressive array of moats and bastioned outworks and hosts a fascinating exhibition on the history of the site.

In 1539 Henry VIII decided to create a string of forts along the Thames to protect access to London. One of the five forts built by Henry was at Gravesend, in Kent, and directly across the river on the Essex bank he decided to build another, at Tilbury.

The two forts were located at a point where the river narrowed, and a ferry crossing already took advantage of that fact. The Tilbury fort was built on the site of a hermitage dissolved by Henry in 1536. The first fort was little more than a D-shaped blockhouse, but during the Armada crisis of 1588 the fort was extended with earthwork defences and a palisade, and a boom was stretched across the river to Gravesend.

It was at this time that Frederico Genebelli, an Italian engineer, designed the star-shaped landward system of earthworks which is Tilbury's most distinctive feature.

Elizabeth I stationed troops at Tilbury in case the Armada broke through the naval defences in the English Channel. It was here that she made her famous 'Armada speech', saying “I know I have the body of a weak and feeble woman; but I have the heart and stomach of a king, and of a king of England, too; and think foul scorn that Parma or Spain, or any prince of Europe, should dare to invade the borders of my realms; to which, rather than any dishonour should grow by me, I myself will take up arms.”

In other words, "I may be 'only a woman', but if Spain thinks they can invade my England, I'll take up arms myself to fight them off!". 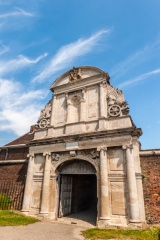 Tilbury was occupied by Parliamentary troops in the Civil War, and the garrison stopped every ship making its way up the river, to ensure that they supported Parliament, before they were allowed to sail on.

The most profound change to Tilbury Fort came following the humiliating Dutch raid on the River Medway in 1667. Charles II rebuilt English fortifications along the Thames, and at Tilbury this entailed a totally new system of defences, based around the Tudor blockhouse, with angled bastions projecting out from the reinforced walls. The bastions were made to support platforms for modern artillery. The building was supervised by Sir Bernard de Gomme, who often used pressed labour from the surrounding towns and village.

One of the most striking contributions designed by Gomme is the Water Gate, in the south-west curtain wall, on the landward side. This was designed to be the fort's main entrance, so it was given an ornate and imposing facade, while the matching Landport Gate in the north wall was left relatively plain. Beside the Water Gate was a chapel, and inside the wall was a large parade ground, a powder magazine, barracks for the garrison, and separate officer's quarters. 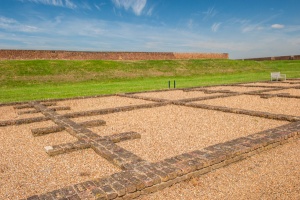 Ruins of the soldier's barracks

The fort continued to be improved throughout the 18th century with each new threat of war, though it never saw military action. Two large powder magazines were added in the 18th century, though quite how the gunpowder was expected to be used is an interesting question, for in 1716 roughly 2/3 of the existing guns were declared unfit for duty.

It was superseded by the 'Palmerston forts' built in 1860, and gradually became less important as a military base. Tilbury's only subsequent military contribution came in WWI when a gun crew brought down a Zeppelin airship. During WWII a bomb hit the soldier's barracks, leaving them as nothing more than foundation walls, while the officer's quarters and magazines were unharmed.

Tilbury is a delight to visit. The buildings inside the curtain wall are in extremely good condition - barring only the destroyed barracks building - and the combination of water and earthwork defences are very impressive.

Tilbury is joined to Coalhouse Fort, 3 miles to the east, by a 3-mile long path along the river, known as The Forts Way. 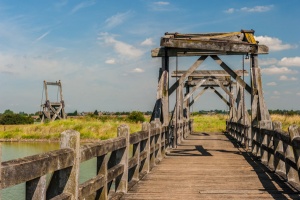 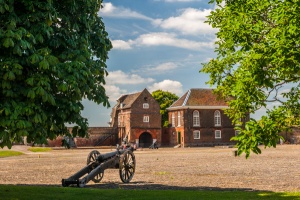 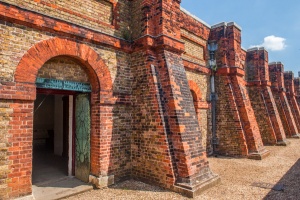 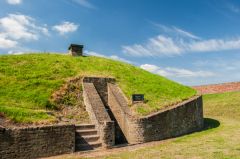 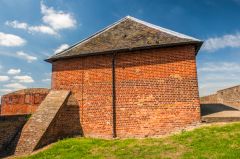 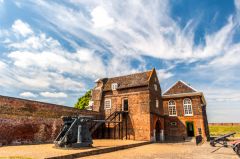 More self catering near Tilbury Fort >>