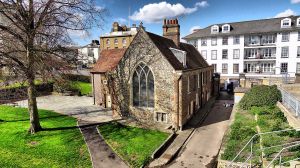 Milton Chantry
The oldest building in Gravesend, Milton Chantry has a fascinating history. It was built by the Earl of Pembroke, Aymer de Valence, as a family chantry chapel, and as a chapel for a leper hospital. After the English Reformation, it became a tavern, before being used as part of a fort in the late 18th century. The building houses displays on local history and the heritage of Milton Chantry itself.
History
In 1322 Aymer de Valence, the powerful Earl of Pembroke, founded a chantry chapel to serve a nearby leper hospital dedicated to St Mary the Virgin. The chapel was run by priests appointed by the Bishop of Rochester and was in operation until the Reformation put an end to chantries. The chantry was taken by the crown, then sold into private hands. It was converted for use as a house, and then a farm. In the late 17th century it served as an inn called New Tavern.

The tavern, in turn, gave its name to a military fort that grew up around it. The New Tavern Fort was in operation from 1780 until 1918, and the tavern was converted into a barracks for the soldiers. The barracks were rebuilt several times and altered during the command of General George Gordon, better known as Chinese Gordon, or Gordon of Khartoum.

In 1932 the former fort was converted into a public park, but the medieval chantry was left. Then during WWII, the basement of the chantry was used as a gas-decontamination area.

Finally, the chapel was converted to serve as a local museum called Chantry Heritage Centre, with exhibits tracing the heritage of Gravesend, Northfleet, and other nearby villages. There is a free tour tracing the long and fascinating history of the building from its roots as a medieval chapel to its role as a tavern and military barracks. See artefacts from Gravesend's past, including Roman finds.

The building retains its flint, brick and stone exterior, with walls fully 3 feet thick. The interior highlight is a wonderful 14th-century timber roof, and there is a chimney in the centre, inserted when the upper floor was added. That upper chamber is accessed via a Jacobean staircase with carved posts and handrails.

What is a Chantry?
During the Middle Ages, wealthy people often endowed (left money for) a chapel, with one or more priests whose job it was to say prayers for the soul of the founder and their family. Often these chantries were attached to parish churches or cathedrals, but sometimes they were separate foundations (such as a collegiate church) and sometimes they were attached to another institution, like a hospital, as is the case with the Milton Chantry.

The Chantry has limited opening hours - usually weekends in the summer months, so it is a good idea to check ahead before visiting.

More self catering near Milton Chantry >>