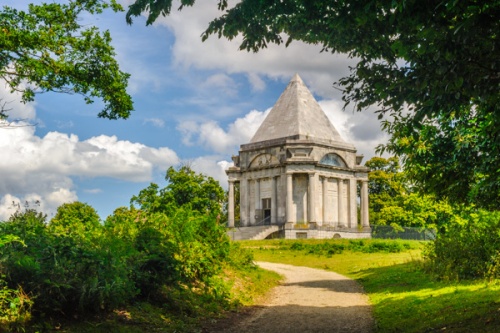 Approaching the Mausoleum from Cobham Woods

The Darnley family of Cobham Hall in Kent were traditionally buried at Westminster Abbey, a fitting final resting place for the influential family. However, when the 3rd Earl died in 1781 the vaults at Westminster were full.

In his will, the Earl asked for a family mausoleum to be built in the old deer park surrounding the Hall. The Earl had gone on a Grand Tour in his youth and was heavily influenced by the art and architecture he encountered in Italy. He asked that the mausoleum have a prominent pyramid and be surrounded by a dry moat.

The 4th Earl complied with his father's wishes, and architect James Wyatt drew up plans for an ornate neo-classical mausoleum along the lines of a Roman temple.

Wyatt even displayed his plans to the Royal Academy in 1783, but his schedule was too busy to allow him to take charge of construction (given his dubious reputation for quality control that's perhaps just as well). Construction was executed by George Dance the Younger in 1786, and the result was a slightly modified version of Wyatt's plan. The final cost was in the region of £9000, roughly equivalent to £1 million today.

The Mausoleum is square with projecting corners, and rises to a pyramid-shaped top. The exterior is Portland stone, and the style is that of a Roman temple, with Doric columns and classically inspired carving details. The unusual pyramidal roof, however, has no precedent in classical Roman style, and was possibly inspired by a romanticised painting by Nicholas Poussin rather than any actual Roman building.

Access is by a flying staircase, leading to a piano nobile, or inner chamber. At the far side of the chamber is an ornate chapel area of rose marble, rising to a domed ceiling above. Around the rear of the Mausoleum, a flight of steps descends to a vaulted crypt lined with openings for 32 coffins. 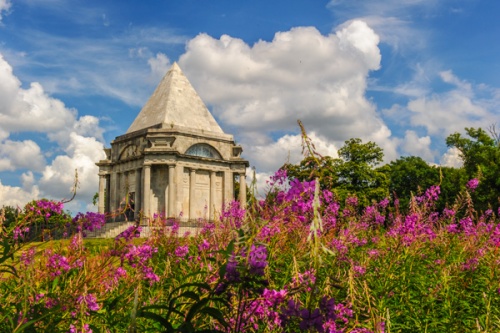 The Mausoleum in summer

Though the mausoleum was completed, no burials ever took there. The reason for this oddity is unclear, but one possibility is that the Earl fell out with the Bishop of Rochester, so the Bishop refused to consecrate the building.

In the 1790s landscape architect Humphry Repton was called in by the 4th Earl to create a picturesque landscape garden from the parkland surrounding Cobham Hall. Repton wanted to turn the Mausoleum into a viewing platform, but the Earl refused. Repton's final design made the mausoleum an important focal point, not surprising given its prominent position on a hill high above the Hall.

The Darnley family sold the Hall in the 1950s, and it is now a popular school. The family kept the woods and mausoleum, however, but after a period of neglect, when the Mausoleum suffered badly from vandalism, they eventually sold the property to Gravesend Council in 2001.

It was restored with the aide of some original Wyatt drawings and plans are underway to restore the surrounding Cobham Woods to Repton's design. You can see 'before' and 'after' photos inside the Mausoleum, and it is quite astonishing to see how the building has been brought back from a decrepit shell to the elegant monument we see today.

There is a small parking area on Lodge Lane, at the eastern edge of Cobham village. From there a path leads past a lovely thatched cottage and straight through Cobham Park, rising steadily until you reach the Mausoleum. On a clear day the view is stunning, and it is easy to see why Repton's landscape garden made the building such a prominent focal point.

When we visited there were very helpful National Trust volunteers in the piano nobile and in the crypt and they told us the story of the building and the curious mystery of why it was never used for burials. I left with many a backward glance - and many a photograph - for the Mausoleum is one of the most striking neo-classical buildings I've ever visited. 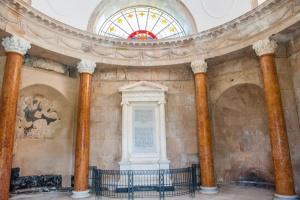 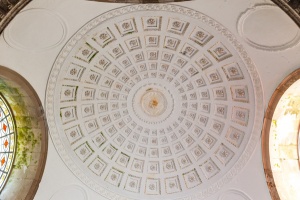 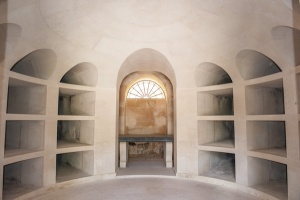 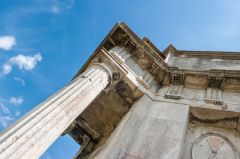 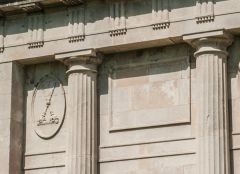 More self catering near Cobham Mausoleum