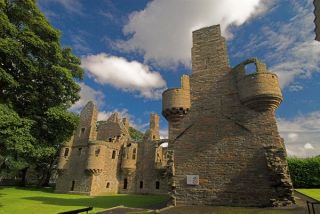 The extensive remains of one of the finest examples of post-medieval architecture in Scotland, located beside the Cathedral and opposite the old Bishop's Palace. The Earl's Palace was built by Earl Patrick Stewart, using forced labour to create a grand residence in French Renaissance style.

Patrick Stewart, Earl of Orkney, was one of the most controversial and reviled men in Orkney's history. 'Black Patie' ruled over his Orkney estates with a fist of iron from his ascent to the Earldom in 1592 until his execution for treason in 1615. In 1600 Earl Patrick decided to create an opulent new residence at Kirkwall, leaving behind his existing residence at Birsay.

The new Earl's residence was meant to be the latest in opulent living, a statement of the Earl's power and influence. It was built around a huge Great Hall, heated by a massive fireplace stretching 5 metres.

The Earl was - not surprisingly - concerned with his own safety and security, for he built his own apartments well away from the rooms reserved for guests, beyond the top of the hall. 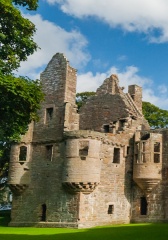 The result of Earl Patrick's efforts has been called the best example of French Renaissance architecture in Scotland. However, to the inhabitants of Orkney, the Palace is not a reminder of a glorious past, but of the darkest and most troubled period of the islander's history, when the Stewart Earls crushed the inhabitants beneath their heels.

Earl Patrick and his father, Robert, forced Orcadians to work without pay. They are said to have jailed and tortured any who dared oppose them. The Earls controlled the courts and government, so there was no check to their ambitions.

Patrick Stewart began construction of the Palace around 1600, before his ascension to the Earldom. He used forced labour to quarry the stones and planned a huge palace, unequalled in grandeur, and incorporating the earlier Bishop's Palace near Kirkwall Cathedral.

Unfortunately, even a rapacious and unprincipled ruler like Earl Patrick still had bills to pay, and by 1606 he was heavily in debt. In 1607 the Earl was arrested, and construction ground to a halt.

The Earl was imprisoned, but his son Robert launched a rebellion against royal authority. Robert Stewart garrisoned the Palace and the Bishop's Palace. A siege followed, and Robert was captured. Both Stewarts were executed for treason in 1615, and the palace passed to the Bishops of Orkney. By 1705 it was recorded as a ruin, and by 1745 slates from the roof had been sold off, and lead stripped from the roof.

The Palace is reached through an imposing entrance, flanked by columns and carved with heraldic symbols. The main residential building stands 2 storeys high, with two wings at right angles, forming a large L-shaped layout.

On the ground floor are a large kitchen area, a well, and storage cellars. A broad stone stair leads to the first floor, where the great wall stood, along with the Earl's apartments. The Great Hall is huge; at some 50 feet long, heated by two large fireplaces and ornate traceried windows. It originally had painted decoration on the walls and was reputed to be among the finest staterooms in Scotland.

A must-see for visitors to Orkney! 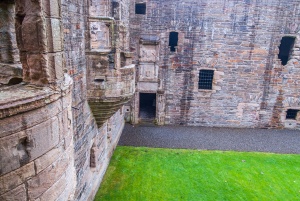 Looking down from the first floor 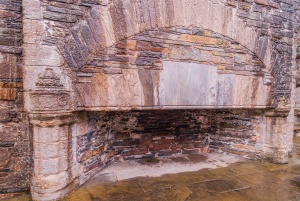 A fireplace in the Great Hall 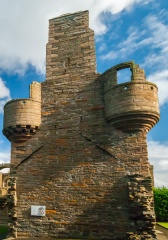 Site of the palace brewhouse 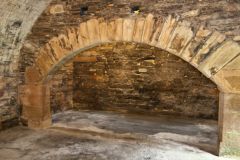 Nearby accommodation is calculated 'as the crow flies' from Earl's Palace, Kirkwall. 'Nearest' may involve a long drive up and down glens or, if you are near the coast, may include a ferry ride! Please check the property map to make sure the location is right for you.