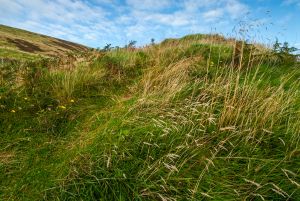 Blackhammer Chambered Tomb
A Neolithic chambered cairn dating to approximately 2500 BCE. Entry to the interior reveals an elongated corbeled chamber with upright partitions. The interior is unusually well lit due to a plexiglass skylights inserted in the roof.

Blackhammer is a 'stalled' cairn; that is, the cairn is formed around a rectangular central chamber, with upright slabs of stone dividing the space into stalls, or compartments. The original entrance to the rectangular inner chamber was via a long, narrow passage, but modern visitors descend a ladder in the roof.

The inner chamber was originally divided into seven stalls, but sometime later four of the upright slabs were removed to make way for a large wall across the middle of the chamber.

When Blackhammer was excavated the remains of two skeletons were found, one in the westernmost compartment and one in the entrance passage. Along with the skeletons were fragments of pottery, tools made of flint and stone, and pieces of animal bone.

It isn't clear whether these finds were intended as grave goods, perhaps because the deceased person had used them in life, or whether they were part of a ritual observance.

Given the size of the cairn and the number of stalls, it seems odd that only two skeletons were discovered. One reasonable theory is that the cairns acted as a cemetery for local communities over the course of centuries, and the communities probably cleared out older remains when new burials were made.

I found Blackhammer very impressive, and it helped that the modern windows let enough light into the interior to see properly! It was a bit disconcerting to see the walls of the chamber reinforced with concrete, but at least the modern materials make the cairn stable and allow visitors such as our family to experience it today.

Blackhammer is one of 4 Neolithic cairns along the southern coast of Rousay, including nearby Taversoe Tuick, Knowe of Yarso, and, a little further west, the impressive 'Ship of Death' at Midhowe. 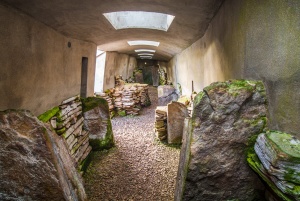 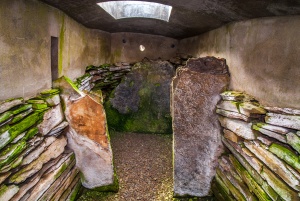 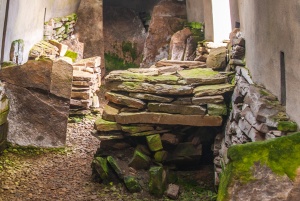 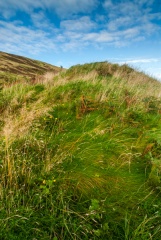 Nearby accommodation is calculated 'as the crow flies' from Blackhammer Chambered Tomb. 'Nearest' may involve a long drive up and down glens or, if you are near the coast, may include a ferry ride! Please check the property map to make sure the location is right for you.