HERITAGE HIGHLIGHTS:   One of the best preserved broch settlements in Scotland 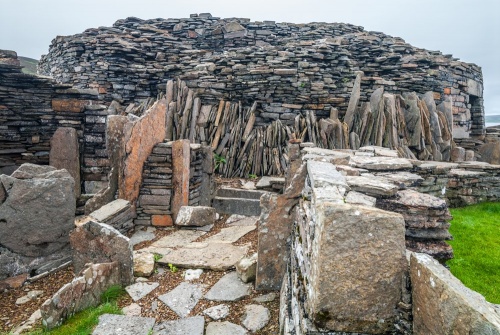 Midhowe Broch is one of the finest Iron Age brochs in Scotland, located in a superb coastal location directly beside the chambered cairn of Midhowe. The central building measures 30 feet in diameter, with walls still standing to a height of 14 feet. This is easily one of the most impressive sites in the Orkney islands, and well worth the journey to Rousay. A signposted path leads from the broch to Midhowe Chambered Cairn and past numerous other historic buildings along the shore.

Midhowe is more than just a single broch; Historic Scotland describes it as a broch village, and that's a pretty accurate description. It is a settlement, in a dramatic coastal setting, looking across Eynhallow Sound to Orkney Mainland. Midhowe was built sometime between 200 BC and AD 200.

The settlement is protected by a stone barrier across the headland, bounded by a ditch. No such defences are needed on the seaward side, where the precipitous rocky cliffs make them unnecessary. The defences are pierced by a low stone entrance with a large lintel over the doorway.

The settlement is built around a single, massive stone broch, or tower, with smaller buildings clustered around it within the outer defences. These buildings seem to have been used as secondary housing, but later in the history of the site they were used as workshops by the broch inhabitants. Within one of these smaller buildings, you can see the remains of a hearth used for smelting iron.

The walls of Midhowe Broch stand about 4.3 metres high now, but would originally have been at least twice that height. The interior of the broch is divided into a confusing jumble of partition walls, with hearths and stone tanks for collecting water. One particular tank within the broch is fed by a spring.

There are some 20 similar settlements around Orkney, but Midhowe has been one of the most heavily investigated. An archaeological investigation in the 1930s unearthed a huge number of artefacts, including tools of both bone and stone, a bronze ladle, and paraphernalia for working bronze.

One unexpected find was a Roman vessel made of bronze. The presence of a Roman artefact gives some small measure of plausibility to the writings of the 4th-century Roman historian, Eutropius, who claimed that the King of Orkney had submitted to Emperor Claudius in AD 43.

More likely it suggests that there was contact between Orkney and the area under Roman control, far to the south, whether that contact was through trade, raiding, or by an exchange of gifts.

Unfortunately, the finds uncovered at Midhowe are no longer on the site, though many can be viewed at the Broch of Gurness, on Orkney Mainland, across the Sound of Eynhallow.

I was extremely impressed with Midhowe; the setting is unforgettable, and the combination of the broch and the nearby chambered cairn make this a 'must-see' historic site.

Part of the fun visiting ancient sites like Midhowe is trying to make some sense of the myriad of stone walls, turf-covered earthworks, and crumbling ruins; trying to see with your mind's eye what the site looked like when there were flesh and blood people living here, seeing the same amazing views. I found Midhowe very evocative; a wonderful historic site in a very special place. 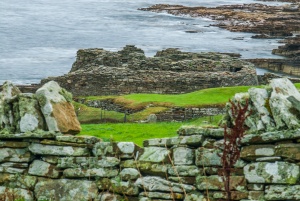 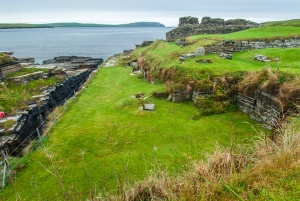 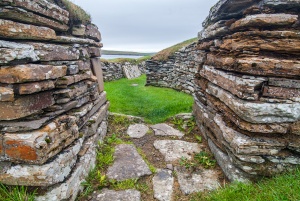 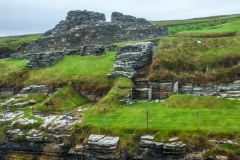 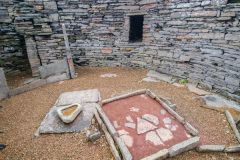 Nearby accommodation is calculated 'as the crow flies' from Midhowe Broch. 'Nearest' may involve a long drive up and down glens or, if you are near the coast, may include a ferry ride! Please check the property map to make sure the location is right for you.

More self catering near Midhowe Broch >>