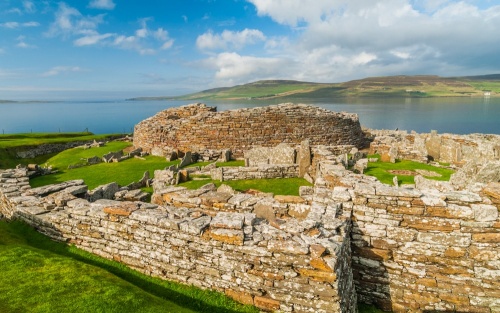 Gurness is a well-preserved Iron Age broch with a surrounding settlement, with evidence of later use during the Norse period.

Gurness was built in the 1st century AD. It consisted of a tall central tower surrounded by three concentric rings of earthworks and ditches, with access by way of a causeway on the eastern end of the site. The area within these defenses was filled with domestic buildings, the foundations of which are clearly visible.

At the height of its prosperity these buildings would have supported a small community of up to 40 people. We don't know the original height of the broch. The walls now stand to a height of 3.5 metres at their tallest, and it appears that after the settlement was abandoned the walls were partly dismantled in order to use the stones for other building projects. 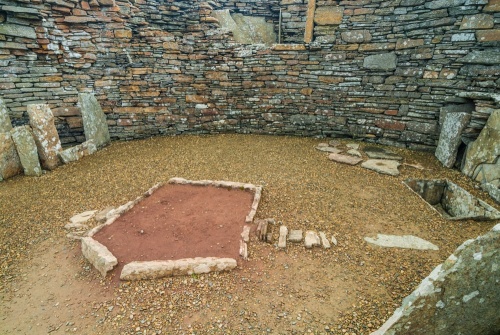 A hearth in the broch interior

The first thing you notice when entering is the sheer mass and width of the walls. It is no wonder they still stand after the passage of so many centuries! Within the enclosure, the original central hearth is clearly visible, as is the underground tank for water. Large upright slabs help divide the space into chambers, and in one corner a well-worn quern, or grinding stone, can be seen.

The remains of the settlement surrounding the broch offer a wonderful glimpse into Pictish life. There is one very large rectangular building, divided into five chambers, and several smaller buildings, some of which may have served as workshop areas. One large building has been suggested as a possible Norse Hall. This hypothesis was given some credence when the grave of a Viking woman was discovered nearby.

Gurness is located on a minor road off the A966 from Finstown to Evie. The turning is well signposted from the A966. There is good parking on the seashore facing Rousay. Look carefully along the shore near the car park; we noticed some curious seals watching us as we walked to the broch.

Gurness is a very well-preserved broch. What is fascinating here are the remains of later settlements on the site. Well worth a visit. Our children, ages 5 and 11, very much enjoyed Gurness, as it offered lots of nooks and crannies, and small passages just their size. The visitor centre also offered some entertaining and educational hands-on activities for the younger generation. 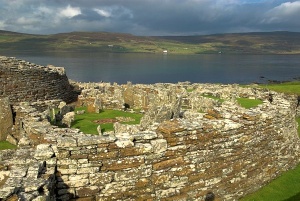 Looking across to Rousay 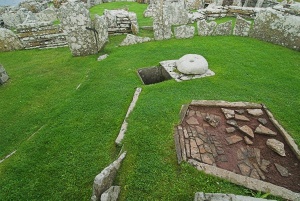 A stone hearth inside the broch 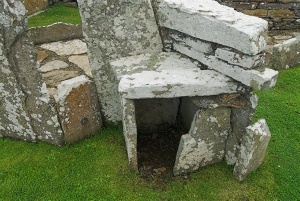 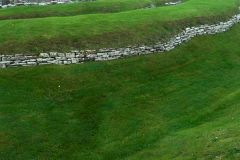 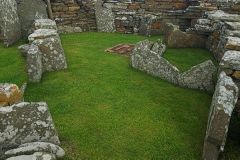 Nearby accommodation is calculated 'as the crow flies' from Broch of Gurness. 'Nearest' may involve a long drive up and down glens or, if you are near the coast, may include a ferry ride! Please check the property map to make sure the location is right for you.

More self catering near Gurness

More bed and breakfasts near Gurness