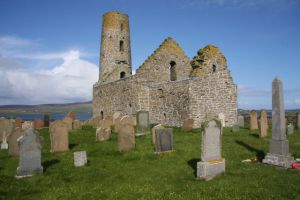 St Magnus Church
The roofless ruins of a 12th-century church stand in the north-west of the little isle of Egilsay, off the eastern end of Rousay. The church was built in the late 12th century and is composed of a rectangular nave which terminates in a square chancel.

At the west end of the church is a striking round tower, which still stands to almost its full height. The church lost its roof in the 19th century.

Death of a Saint

The church is dedicated to St Magnus, who was killed on Egilsay island, possibly on this very spot. It probably stands on the site of an earlier church which was mentioned in the Orkneyinga sagas as the place where Earl Magnus was killed sometime between 1115-1118.

Earl Magnus and Earl Hakon vied for the right to rule Orkney. Magnus died in a confrontation with Hakon on Egilsay, possibly in 1116, and just 20 years later in 1136 Bishop William of Orkney had Magnus recognised as a saint. The church was erected on the presumed site of Magnus' murder and became a place of veneration for pilgrims.

The most striking part of the roofless building we see today is the circular tower. The tower originally had five floors, stood some 20m (66 feet) high and could be seen for miles. It acted as a landmark for pilgrims seeking out the sacred site. The tower is similar to round towers in northern Germany and the North Sea, illustrating the vast area ruled by the powerful Earls of Orkney.

The remarkably complete building consists of three main parts; a chancel at the east end giving way to a central nave, and at the west end is the circular tower. Above the chancel was an upper floor housing a sacristy and treasury, though few traces of this chamber remain.

Egilsay can be reached by a regular ferry service from Tingwall. It is roughly 0.5 miles on foot from the ferry terminal to the church.

Nearby accommodation is calculated 'as the crow flies' from St Magnus Church. 'Nearest' may involve a long drive up and down glens or, if you are near the coast, may include a ferry ride! Please check the property map to make sure the location is right for you.