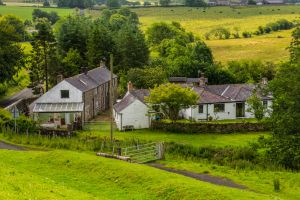 Bewcastle is a remote moorland hamlet that features the extraordinary 'Bewcastle Cross', a 7th-8th century cross with intricate carvings on all 4 sides. Beside the church stands the ruins of a castle, built in part with stone from Hadrian's Wall.

To call Bewcastle 'unspoilt' is an understatement; it is a place where time seems to have stood still. The village is reached by narrow lanes that take you deep into the secluded countryside of the remote border region, where the sound of bird calls may be the only noise you hear.

The area was settled as early as the Bronze Age, and remains of hut circles can be seen near the castle. The Romans built a fort here in the 3rd century, called Fanum Cocidi, well north of Hadrian's Wall. The fort was large enough to support a garrison of over 1000 men, so Bewcastle must have been a fairly important site.

One unusual feature is that the fort was built with six sides, rather than the usual square shape. It was attacked and overrun in AD 343 and again in AD 367, after which it seems to have been abandoned. You can easily make out the outline of earth banks and ditches in the fields beside the roadway.

The origins of Bewcastle church are lost in time. One possibility is that a monastic cell was founded within the ruins of the Roman fort, and that cell eventually grew to become St Cuthbert's church. The first written record of a church comes from 1277, and it seems clear that stone for this 13th-century building was taken from the Roman fort. The present church is a result of a rebuilding in 1792. The list of rectors shows that several successful Border Reivers acted as rector.

In the churchyard, and probably still in its original position, is the 7th-century cross which is Bewcastle's primary claim to fame. The Cross is beautifully carved on all four sides, with a mix of traditional Celtic carving motifs and likenesses of Biblical figures and what may be the earliest depiction of a secular person in England.

On one side is a sundial thought to be the oldest in Britain. It is not divided into hours, but into four 'tides', divisions which ruled the working day of the rural population. A small museum in the churchyard tells the story of the cross and its significance.

Around 1092 the first Norman castle was erected at Bewcastle inside the walls of the Roman fort. The 11th-century fortress was destroyed in 1173 and rebuilt in the late 14th century. By the early 15th century the castle was in poor repair, but later that same century Edward IV granted the estate and castle to his brother Richard, Duke of Gloucester (later Richard III). It was probably Richard who repaired the walls and rebuilt the gatehouse to give the castle its present appearance.

The final blow came during the Civil War when Cromwell's men destroyed the defences. Stone was robbed for other building projects, leaving the 15th-century gatehouse as the most impressive part of the castle today. 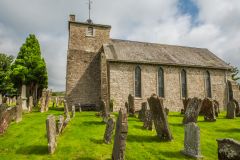 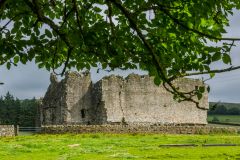 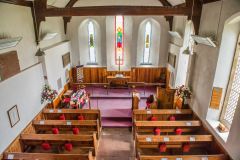 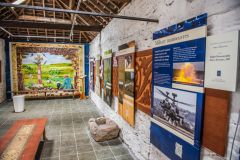 More self catering near Bewcastle >>

More bed and breakfasts near Bewcastle >>