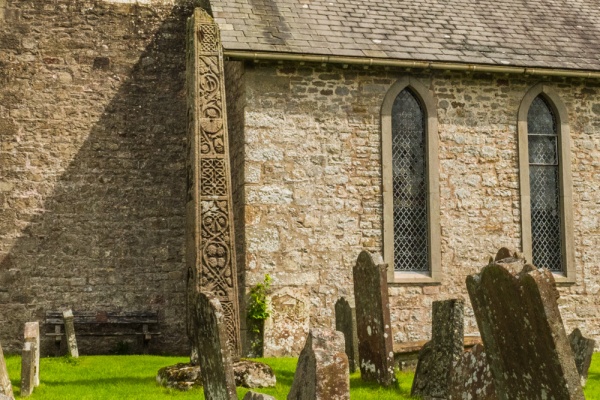 The Bewcastle Cross is a superbly carved late 7th or early 8th-century cross shaft, standing in the churchyard of St Cuthbert's Church in the remote Cumbrian hamlet of Bewcastle. The beautifully crafted decoration on the cross is probably the finest example of pre-Norman carving in England, and bears comparison to the superb Ruthwell Cross, across the border in Dumfries and Galloway.

It is not known exactly when the Bewcastle Cross was crafted, but a date shortly after AD 675 has been suggested. At this time masons were brought in from abroad to work on the new monastery at Monkwearmouth, and it is possible that these foreign craftsmen worked on the Bewcastle Cross, which shows a similarity of style to other carvings in Europe and the Middle East.

The main carvings are all on the west face of the cross, and they show three Biblical figures; John the Baptist, Christ, and a figure which may be St John the Evangelist. I say 'may be', as the style of the third figure is very unusual, and it may be intended to represent a Saxon nobleman. If so, it would be one of the very first likenesses of a secular person in England. There is a hole by St John's arm, and this may have been used to hold a religious relic, such as a fragment of the true cross.

The other three sides of the cross are covered with magnificent Celtic style geometric patterns and interlacing plants. The overall effect of the carvings is simply stunning, and the Bewcastle Cross deserves recognition as a national treasure; a real gem of our pre-Norman heritage.

Near the church are the ruins of a medieval castle, made in part using Roman stones from Hadrian's Wall, which runs nearby.

On the south side of the churchyard is a free exhibition on Bewcastle church, castle, and cross, with examples of medieval carving found near the site, and displays on Reiving in the border region.

I've been fortunate enough to visit Bewcastle twice. The first time I arrived in the pouring rain, when it was rather difficult to get a clear idea of the carving on the cross - and even harder to stay dry while doing so. On our return visit, the sun made a brief guest appearance, and I was able to really get a close look at the carvings. It truly is a magnificent piece of historic architecture.

It seemed to me that the carving of St John the Evangelist had worn noticeably since my first visit. I do hope that's not the case, for the carving has stood the test of time for over 1200 years, and many of the other carvings are just as crisp and clear as they were when made by unknown craftsmen so many centuries ago.

The cross itself is not signposted, but Bewcastle itself is signposted off the B6318, west of Gilsland. As you arrive in the hamlet there is a sign to the church and a wide area to park outside the churchyard wall. From the churchyard, you can easily see the neighbouring castle and the earthwork remains of the earlier Roman fort. The Cross stands immediately south of the church tower.

More self catering near Bewcastle Cross >>