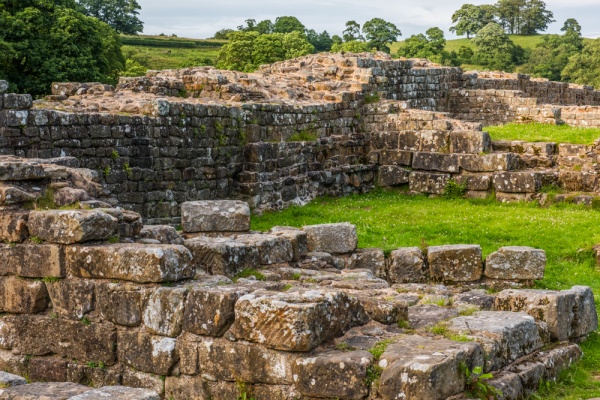 On the east bank of the River Irthing stand the remains of a Roman bridge built on the line of Hadrian's Wall. The bridge is now completely on dry land, and a modern footbridge takes walkers across the river and along an extremely well-preserved section of Hadrian's Wall to Birdoswald Roman Fort a short distance away.

Willowford bridge was built as part of Hadrian's Wall, around 122 AD. The bridge was built in two phases; the first was fairly narrow and is represented by the abutment and foundations on the east shore. Nearby is a huge pier which helped support a second, wider bridge.

Excavations appear to show the bridge actually carried Hadrian's Wall across the Irthing. In other words, Willowford did not just present a simple footbridge for Roman soldiers to cross the river, but it actually supported the entire weight of Hadrian's Wall. 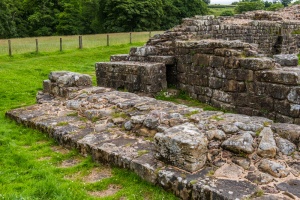 Foundations of the bridge pier

The bridge abutment stands quite some distance from the current river bank, which has gradually moved westwards since the Roman period due to erosion. Very little survives of the first bridge beyond the foundations of the abutment and the base of a tower, which is recessed into the broad gauge Wall foundations. The tower was presumably one of a matching pair, one on each bank. The towers may have helped control bridge traffic across the river.

A channel separates this abutment from the huge foundation of a pier closer to the river. This pier was the first of the second, wider bridge which carried the Wall and the Military Way.

What is really fascinating is the arrangement of stone dovetails and bar cramps carefully carved to bond the stonework of this second bridge. A number of stones showing dovetail slots are laid out beside the Wall and it is intriguing to see how the Romans used techniques similar to what a fine furniture maker of a later era might use to bond different sections of material.

A short distance from the remains of the Roman bridge is a striking modern footbridge. Because of the sensitive archaeology of the area this footbridge had to be assembled off-site, transported by a helicopter to Willowford, and carefully lowered into position. The footbridge has received several architectural awards and makes a fascinating contrast to the older Roman remains.

There are two ways to reach Willowford Bridge, and both involve a very pleasant walk. You can park at Birdoswald Roman Fort and follow the Hadrian's Wall Path along the Wall, past Harrows Scar Milecastle, and down the side of the Irthing gorge to the river. The car parking at Birdoswald is pay and display, but the fee is refundable if you visit the fort.

Alternatively, use the free parking area at the western edge of Gilsland (see our post on Willowford Turrets and Wall for details). From Gilsland the path follows the line of the Wall past a pair of turrets then dips gradually down to the eastern bank of the river. This is probably a gentler walk if you aren't feeling terribly energetic. 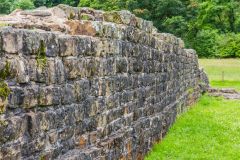 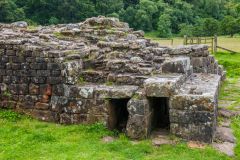 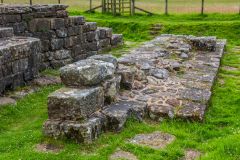 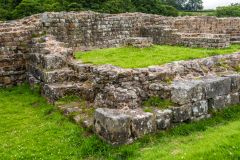 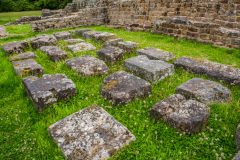 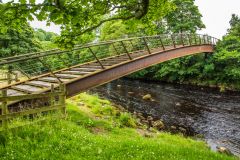