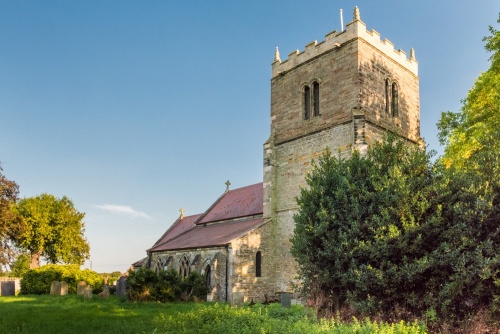 The Domesday Book of 1086 mentions the Nottinghamshire village of Screveton but makes no mention of a church. There was probably a church here in the 12th century but the oldest part of the present church dates to the 13th century.

The font is 12th-century and probably came from the first church on this site. It is decorated with interlaced arcading and was sculpted around 1170. Also of 12th-century date is a traceried panel carved with figures.

The nave and aisles are primarily 13th century, as is the chancel, though the east wall is later. The west tower is 15th century, with later additions. The chancel was restored in 1881 and the nave followed 3 years later in 1884. 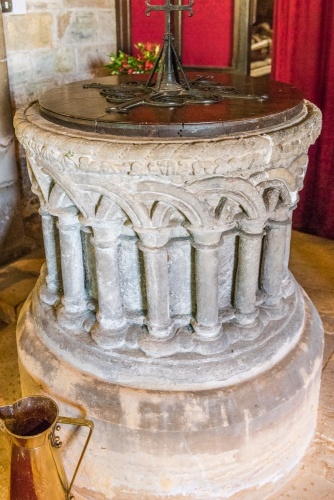 In the 13th century, a dispute broke out between the lords of the manor and the Abbot of Welbeck, both of whom claimed the right of patronage to St Wilfrid's Church. The dispute was eventually settled in 1241 by having the lords and the abbot take turns presenting the next rector.

The dispute arose again almost three centuries later in 1505 when both the abbey and the lord of the manor presented a different candidate to be the next rector. A compromise solution was found; both parties agreed that it was the Abbey's turn, and the abbot agreed to present the lord's candidate!

In 1554 the rector was Thomas Curwen, who had married, as was permitted under Anglican reforms. When Mary I came to the throne she forced all clergy who had married to abandon their wives. Rev Curwen refused and was deprived of his post. A Presbyterian rector, Thomas Bosworth, was installed in 1657, only to lose his post when the monarchy was restored three years later. 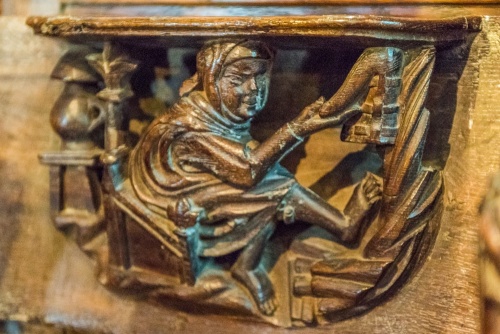 In the tower is a memorial to Sir Richard Whalley (d. 1583), his three wives and 25 children. Sir Richard rose to prominence at the Court of Henry VIII where he was lauded for 'the grace and skill which he displayed in the martial exercises of that age'. In other words, he was a good fighter.

Henry VIII gave Sir Richard the job of surveying the monastic houses of Leicestershire in the buildup to his dissolution of the Monasteries. Sir Richard used the post to his advantage and was able to acquire Welbeck Abbey. After Henry's death, Sir Richard acted as a steward for the Lord Protector Somerset. When Somerset fell from power Sir Richard was sent to the Tower of London - twice, but he escaped punishment by paying a hefty fine. He later served as an MP, and built a considerable fortune after Elizabeth I granted him several large estates.

Sir Richard's third wife Barbara survived him and built the striking alabaster monument under the tower (it was originally installed in the chancel but was moved in 1881 when the chancel was restored). The tomb shows Sir Richard's effigy with his head resting on a whale and his feet on a whale's head, the Whalley family crest. Over the effigy are his three wives, each with her children on the panel behind her. 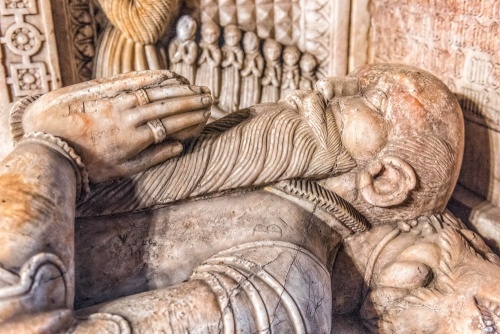 Behold his Wives were number three :
Two of them died in right good fame :
The Third this Tomb erected she,
For him who well deserv'd the same.
Both for his life and Godly end,
Which all that knows must needs commend:
And they that knows not, yet may see,
A worthy Whalleye loe was he.
Since time brings all things to an end,
Let us our selves applye,
And learn by this our faithful friend,
That here in Tombe doth lye,
To fear the Lord, and eke beholde
The fairest is but dust and Mold:
For as we are, so once was he :
And as he ys, so must we be.

Also under the tower is a memorial to Margaret Whalley, erected in 1675 by her husband Peniston Whalley. Built into the west wall of the tower is a fragment of an alabaster tomb chest, with carvings depicting 3 angels holding a heraldic shield. 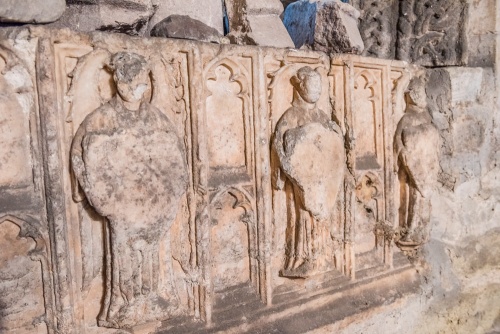 Over the chancel arch is a beautifully carved and painted royal coat of arms to Charles II. The wooden panel also bears the Whalley arms and is decorated with gilded cherub heads. On the sill of the west tower window is a fragment of a medieval cross slab. Set into the floor is a pair of 17th-century grave slabs to other members of the Whalley family.

At the east end of the south aisle is a beautifully carved 14th-century piscina. It was discovered, completely filled in, when the aisle was restored in 1884. In the north aisle is a late medieval parish chest, possibly dating to the 14th century. The chest is banded by 21 strips of iron. Near the piscina is a plaque commemorating the crews of 2 RAF aircraft that died in a mid-air collision over Screveton in 1944.

The stained glass is all 19th-century work, including several windows by the Burlison & Grylls company. 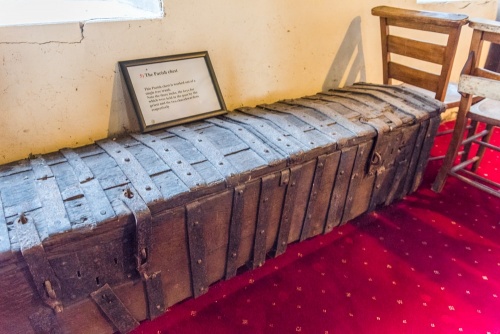 There are three bells. The oldest dates to the late 15th century, the second to 1639, and the third was cast in the 18th century but bears no inscription. The bell-chamber is reached by a medieval wooden ladder.

There are two misericords in the chancel. One dates to the late 15th century and is carved with a representation of Winter - a man warming his feet by a fire. This is probably part of an original set of 12 misericords, each one representing a different month of the year. Similar carvings in other places have been used to represent February. The second misericord, depicting St Wilfrid, was added in 1908.

There are very good 18th-century slate gravestones in the churchyard. At the east end of the churchyard is a 16th-century house that may have originally been a priest's house. It is now a private residence. 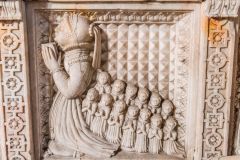 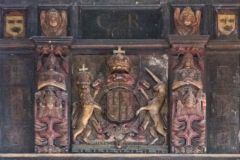 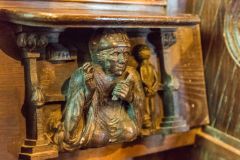