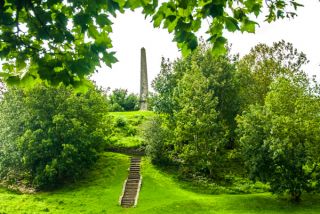 Castle Howe
It is unusual that a small town can boast two castle, but Kendal is an exception. There are the 13th-century ruins of Kendal Castle, and this, Castle Howe, an earthwork motte and bailey fortification dating from the late 11th century. There is a small, treed mound, with a 1788 monument in the shape of an obelisk, commemorating the centenary of the Glorious Revolution of 1688.

The mound rises about 11 metres high and is roughly 18 metres across at the summit, sloping to 46 metres diameter at the base. Below the mound is a small triangular level area, or bailey, which was later used as a bowling green, then as a public park.

Castle Howe was first fortified around 1092 when William II tried to push the Norman frontier north into Scotland. We do not know for certain who erected the castle, but it may have been Ivo de Taillebois, who was granted the Barony of Kentdale (Kendal) by William. Or it may have been another Norman noble by the name of Ketel.

The motte was built on a natural ridge, strengthened by a system of earthwork banks and ditches. It would have been protected by a timber palisade around the top of the mound, surrounding a wooden keep, and a similar palisade would have encircled the bailey, where timber service buildings would have stood. Of these timber buildings, no trace can now be found. 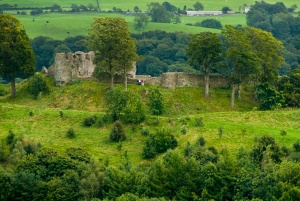 Kendal Castle in the distance
across the River Kent

Sometime in the first decade of the 13th century, the Castle Howe site was abandoned in favour of Castle Hill, across the river, where Kendal Castle now stands. The earlier earthwork and timber castle was left to decay.

At least, this is the normal version of history; it is equally possible that both castles were in use at the same time, one administering the town below, the other controlling the large estates of Kentdale.

Castle Howe is today a rather pleasant green space, with steps built into the side of the motte so you can climb to the monument and get excellent views across the rooftops of the town below and over the river to Kendal Castle in the distance. The site is cared for by the South Lakeland District Council, and there is an information panel and map of the site at the base of the motte. 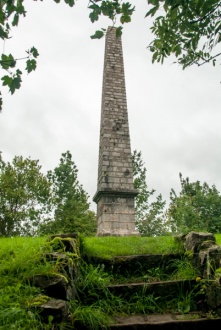 The obelisk on top of the
castle mound 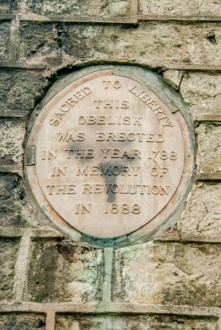 The commemoration plaque
on the monument

More self catering near Castle Howe >>