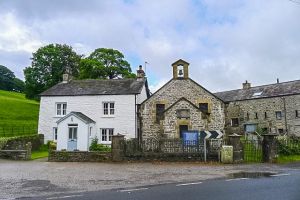 Sedbergh, St Gregory's Chapel
An intriguing chapel built in 1850 to cater to navvies building the London and North Western Railway company branch line to Ingleton. The chapel was built within Ingmire Hall Estate, a mile or so west of Sedbergh. Records suggest that the railway company sent a scripture reader for the workmen, and the chapel was built to provide a place of worship.

The chapel is built to a very simple plan, made of rubble with sandstone dressing and a slate roof. There is a nave (interestingly oriented north to south rather than the more traditional Anglican west/east), a north porch and south chancel. The architect is unknown, but the style suggests that it might have been built by a railway engineer.

Perhaps the most interesting feature is the stained glass, added during a 1900 restoration by Frederick Simon. Rather than strictly Biblical scenes, the glass depicts the local landscape, trees, plants, birds, and animals.

The chapel is not in regular use and is cared for by the Churches Conservation Trust.