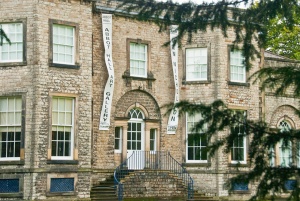 Abbot Hall is an attractive Georgian mansion standing on the bank of the River Kent, in the heart of Kendal. Sometime in the 14th or 15th centuries, a building was erected here to serve as lodging for the Abbot of the Abbey of St. Mary's in York, which held the parish church. That building was destroyed in the Dissolution of the Monasteries, but a new Hall was built in the late Elizabethan period.

In 1759 George Wilson bought the property and surrounding estates and built a new mansion in the Georgian style on the site. In 1897 the Hall was purchased by the Kendal Corporation (i.e. the town government) and the grounds were opened to the public as a riverside park.

Finally, in the latter half of the 20th century the house underwent major restoration and was transformed into the current art gallery featuring local artists.

The collection includes works by such artists as Romney, Turner, Ruskin, Ben Nicholson, Auerbach, Bridget Riley and Tony Bevan. In addition, there is a regular program of touring exhibits by contemporary British artists.

I didn't know what to expect when I visited Abbot Hall. Before my visit, I had known very little about George Romney, but it was the gallery's exhibition of Romney's work that really stays in my memory. The more I saw of the portraits which made Romney so popular in his heyday, the more I began to appreciate his art, and to see it displayed in such an elegant, understated setting as Abbot Hall made it all the more memorable.

More self catering near Abbot Hall

Self Catering near Kendal