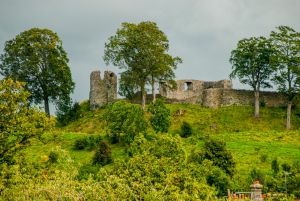 The ruins of an early 13th-century castle overlooking the River Kent. Two towers and stretches of the curtain wall remain of this, the family home of the Parr family for four centuries.

The first castle at Kendal is Castle Howe, visible on a high hill on the west side of town. The Castle Howe site proved too cramped, and a new castle was built on Castle Hill, across the River Kent, by Gilbert fitz Roger fitz Reinfried, Sheriff of Lancaster from 1206-1215.

Gilbert did not have long to enjoy his new fortress; he joined the Baron's Rebellion against King John, and when his son William de Lancaster was captured at the siege of Rochester, the castle was seized by the crown.

William fitz Reinfried restored the castle in 1241, and it passed down through generations of his descendants until Richard II granted it to the Parr family, who took control in 1383. The most famous of the Parr family was Katherine Parr, sixth and final queen to Henry VIII. 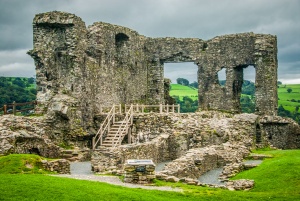 Kendal town suffered several attacks during the Scottish Wars of Independence, but it seems that the castle itself was never seriously threatened.

In 1486 William Parr's widow remarried and left Kendal for Northamptonshire. The castle fell out of use, and stone was used for building projects in the town below. By 1572 the castle was in a state of decay. Records from that time say that 'all is in a state of dilapidation'. It was purchased by the town of Kendal to mark Queen Victoria's Diamond Jubilee in 1896.

Footpaths lead through fields and woods below the hill, making for enjoyable walks. One mile away is Castle Howe, an earthwork Norman motte and bailey fortification.

The castle is built to a roughly circular shape, with a gatehouse in the north defended by twin towers. To the east is the main hall with cellars for storage beneath. Beside the hall is a projecting tower called the Lyons Den Tower, or Machel Tower, which probably was used by the lord and his family for accommodation.

Near the tower and hall is the chapel site, while in the centre of the inner courtyard is a small dovecote. Also near the chapel are the remains of the well, an essential part of castle life. Against the south wall is the Main Tower, rising 3 storeys. Around the inside of the wall were service buildings, and to the east of the gatehouse is a circular guard tower, or Troutbeck Tower, with a dungeon chamber at the base and a garderobe above.

The curtain wall is a fascinating piece of construction. It was very obviously built by different teams of workmen, and you can see where two gangs met by the vertical break in the stonework.

Finds from the castle are on display at the Kendal Museum, where you can also purchase a guidebook to the site. There are no facilities at the castle site, but there are several information panels around the castle, with history and illustrations showing how people lived here in the medieval period and how the castle might have looked.

It is fascinating to stand within the walls of Kendal Castle and look across the river and town to Castle Howe, the original castle site. 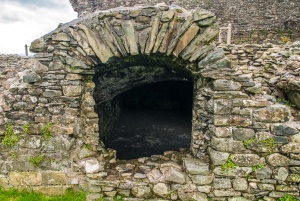 Archway in the Hall 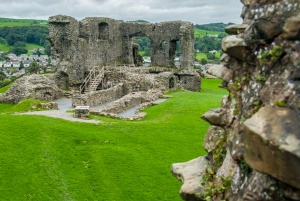 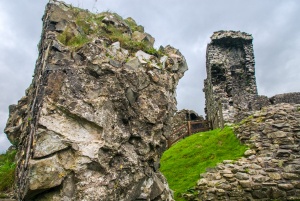 Ruined section of the curtain wall

More self catering near Kendal Castle >>