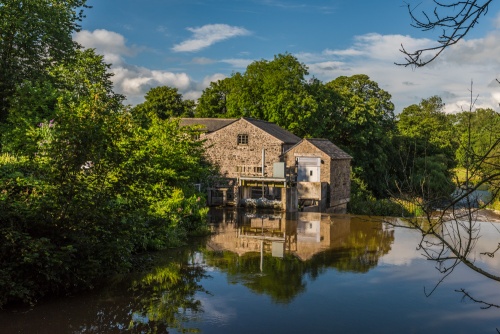 Hugging the bank of the River Bela on the outskirts of the pretty village of Beetham, Cumbria, is Heron Corn Mill, built in the late 18th century but standing on a site where grain has been ground since at least the 11th century.

Records show that there was a manorial corn mill on or near this site since 1096, and possibly long before that date. In 1220 Thomas de Bethum, lord of the manor of Beetham, granted the monks of St Mary's Abbey in York the right to grind their grain at his mill.

The mill formed part of the Haverbrack (or Haverbreke) estate. It gained the name of Heron Mill in 1608 because a heronry existed a mile away. The heronry stopped in 1726 but you can still frequently see herons in the area. 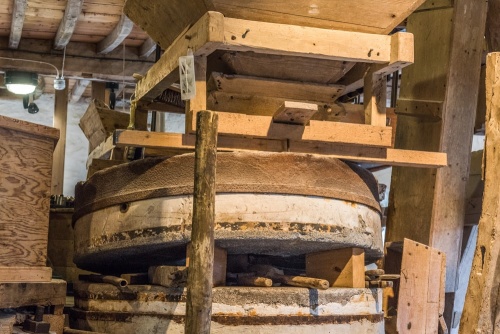 In 1740 the present Heron Mill was built on the west bank of the river, opposite a fulling mill on the east bank. The two mills shared the water rights between them. In 1788 the fulling mill was converted into a paper mill, and a flax mill was erected next to it in 1791. The paper mill is still operating today.

In the 1920s Heron Mill was converted from grinding flour to milling grain for animal feed, focussing on supplying cattle feed to the W&J Pye firm of Lancaster. The mill carried on grinding animal feed until it closed its doors in 1958.

The mill buildings were used for farm storage and briefly as a hen house before it was purchased by the owners of the paper mill on the far bank, Henry Cooke Ltd. The mill owners created the Beetham Trust, a charity run by volunteers, who restored the historic buildings and reopened the mill as a visitor attraction in 1975. 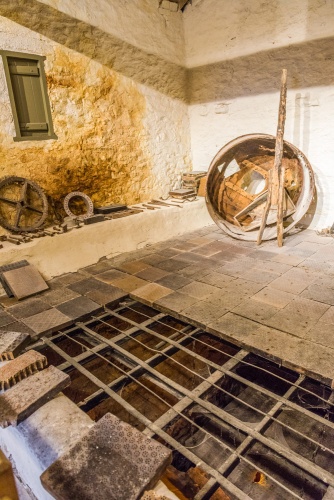 The malting floor for drying grain

The mill originally used a much lower head of water and had its waterwheel mounted below the current wheel level. The present waterwheel dates to the middle of the 19th century and is a mix of timber and iron parts. The mill stands three storeys high. 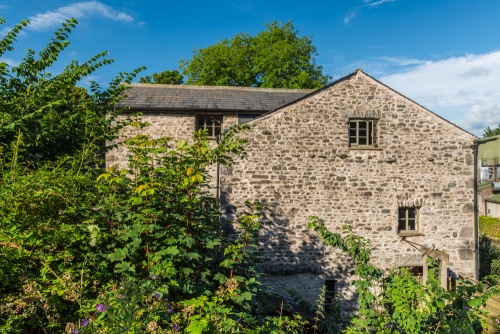 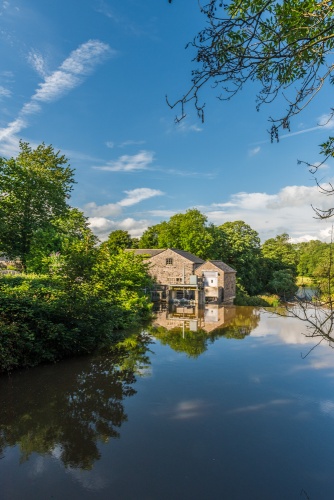 The millpond on a
late summer evening

The visitor entrance, cafe, and learning centre are housed in a restored 18th-century threshing barn at the site entrance. The barn had a central entrance large enough for a cart to drive straight into the barn, where there was a threshing floor, with room for cattle at one end.

The barn was later used as a carter's barn and then as a museum of papermaking. It s now a multi-purpose arts and community workspace and is used as an education centre and exhibition area. 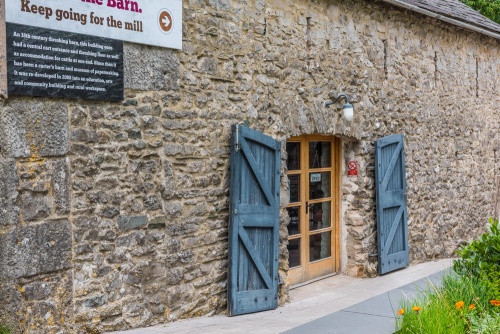 In a small structure projecting out over the millpond is a 100kW hydro-powered Kaplan turbine, installed in 2009. The turbine provides enough electricity to sell to the National Grid and thus create a sustainable income for the mill, making it self-sufficient and ensuring its survival. The Kaplan turbine was invented by an Austrian professor named Viktor Kaplan as a solution for low-head locations like Heron Mill.

The mill building is open for self-guided tours with regular milling demonstrations held one day per month. You can also purchase freshly-milled sacks of rye, spelt, and wholemeal flours.

A footpath leads from Heron Mill north to the nearby village of Milnthorpe. 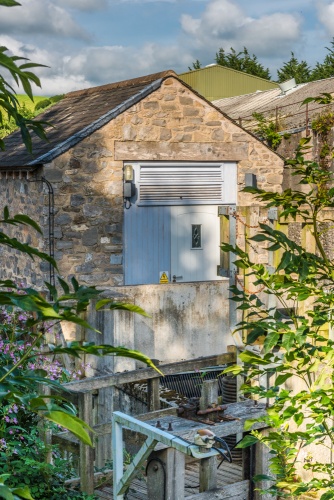 Heron Corn Mill is located at the end of Mill Lane in Beetham. There are two turnings to Beetham village off the A6 (Beetham Road). Either will do, but the northernmost one is easier. Turn off the A5 and immediately turn right onto Mill Lane. It is easy to miss the turning, it is so close to the A5 turnoff. Then simply follow the lane as it follows the river Bela north to the mill. There is a large parking area in front of the mill.

We've visited Heron Mill several times. It is a beautiful location, especially when the mill pond is placid and reflects the historic 18th-century buildings. The mill itself is quite interesting, with information panels explaining the milling process and friendly volunteers on hand to answer any questions. 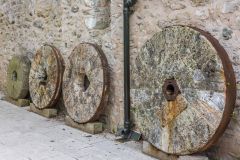 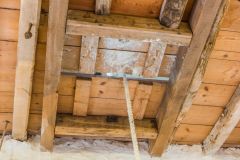 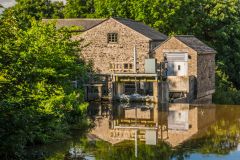