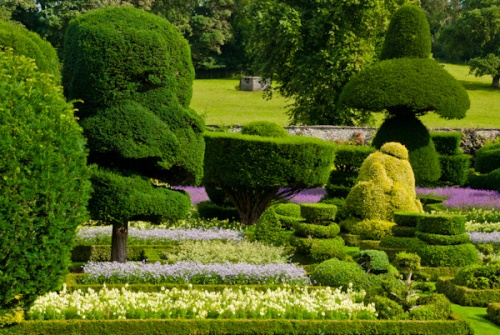 The core of this delightful Elizabethan manor is a pele tower built in 1350 as a defence against Scottish raiders. The later Elizabethan home was built around the tower by the Bellingham family, who created a comfortable home with panelled rooms decorated with fine plasterwork ceilings.

There are a pair of very large and ornate chimney-pieces from the late 16th century, but the really special room at Levens is the dining room, which has unusual embossed leather wall coverings from Cordova.

James Bellingham was fiercely loyal to Elizabeth I, and that monarch's coat of arms appears throughout the house. When Elizabeth died, Bellingham rode to meet the new monarch, James I and VI, on his journey south to claim the throne. He then retreated to Levens and never left it again for the remaining 38 years of his life.

The Bellingham ownership ended in 1688 after the last owner gambled his fortune away, and the house was sold to Col. James Grahme, former Privy Purse to James II. A persistent story associated with the sale suggests that the Bellingham owner risked his house and estate on a single turn of the cards, and lost. 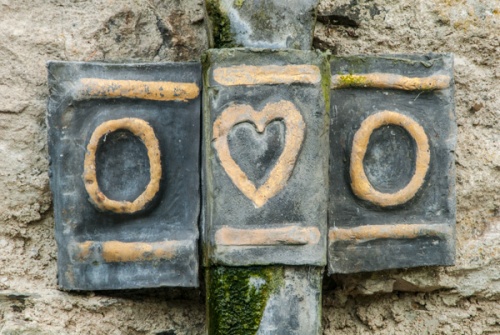 Ace of Hearts symbol - how the house was won

Look for the rainwater heads on the exterior of the house; they are decorated with the symbol of a single heart, said to represent the ace of hearts that won the Levens estate for Col. Grahme. Grahme expanded the house in 1694, inserting a grand staircase and a new domestic wing with a brewhouse. He also laid out the topiary gardens for which Levens is famous, but more on the gardens shortly.

You enter Levens directly into the Great Hall, which is linked to a richly panelled Great Chamber. Interior rooms feature the family collections of paintings and memorabilia, including the earliest known example of English patchwork.

Among the various items on display are Beau Brummel's snuff-box, paintings by Van Dyck, Brueghel the Elder, and Rubens, and items associated with the Duke of Wellington and Admiral Nelson.

There is also a collection of Napoleonic mementoes, courtesy of a son of the house having married a niece of Wellington. The Duke gave the couple several items associated with his old foe, including a clasp discovered in Napoleon's private coach after the Battle of Waterloo.

Levens Hall is home to several resident ghosts; a Grey Lady is known to appear in front of cars on the driveway, a woman in a print dress and cap appears before children, and a small black dog wanders the hall.

The gardens were laid out in 1694 for James Grahme by Guillaume Beaumont, who trained under Andre Le Notre at Versailles. Beaumont had only recently finished laying out gardens at Hampton Court Palace. Very little has been altered since that time, which is all to the good, as Beaumont created a wonderful experience with his imaginative use of topiary and garden walks. The gardens also feature the earliest known example in England of a "ha-ha", or sunken ditch. 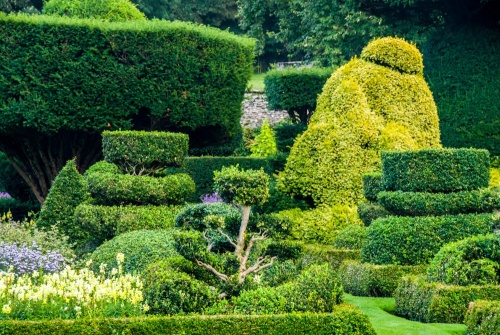 The topiary of clipped yew and box hedges is underplanted with bedding plants in spring and summer, making for excellent colour. A rose garden, herbaceous borders, and a nuttery complete a most enjoyable garden. The most recent addition at Levens Hall is a fountain, approached by an avenue of pleached lime planted to celebrate 300 years of the gardens. Best viewed in: summer.

I loved the house, particularly the extraordinary leather wall covering in the dining room. It is a very warm and inviting house, very much a family home rather than a showpiece museum. But the gardens are what really stays in my memory. They truly are extraordinary, with so many different shapes, sizes, and colours of clipped yew and box. 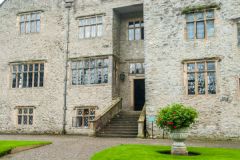 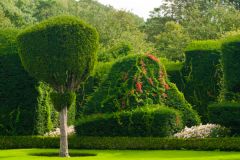 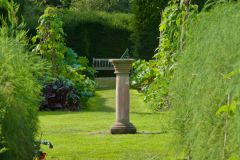 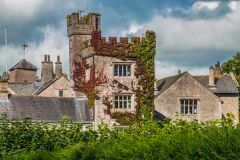 More self catering near Levens Hall

Self Catering near Kendal