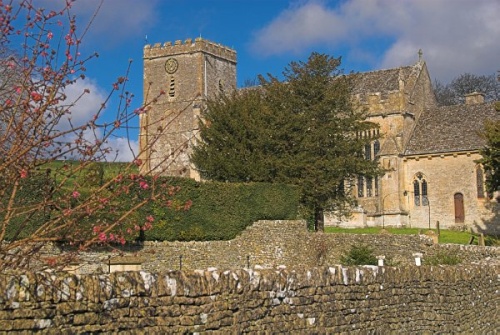 The village of Chedworth is most famous for the nearby Roman villa of the same name (though the villa is actually in the neighbouring parish of Yanworth). A local resident informed me that Chedworth is the longest village in England. I don't know who did the measuring, but certainly the village stretches for a long ways along the hillside and down into the valley of the Coln.

Given that length, it is not surprising that the parish church of St Andrew is a bit difficult to find at first. If you are approaching from the A429 Fosse Way, don't take the first signposted turning into the village, but proceed along the minor road to the far western edge of the village, where the spire of the church makes it easy to pick out beside the small manor house. 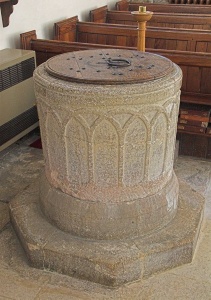 The situation of St Andrew is an idyllic one; it is set upon a level piece of ground beside the manor house, overlooking the Coln valley below. Immediately downhill of the church is a row of Cotswold stone cottages and beyond that, the local pub. Less than a mile away is the Roman villa of Chedworth (National Trust).

The church is fairly typical of this region, with a square embattled west tower, south porch, north aisle, and chancel. The set of Perpendicular windows lining the nave are unusually large, especially for a church this size. By comparison, look at the oldest window in the church, a small Early English example set into the north wall of the chancel. A row of 15th-century gargoyles is set below the roofline, above the windows.

The oldest part of St Andrew is the tower, which dates to the year 1100. Also from that period is the lovely tub font, carved with interlaced arches, and the arches separating the nave and north aisle. The nave was raised in the 15th century to allow for the insertion of the Perpendicular windows. 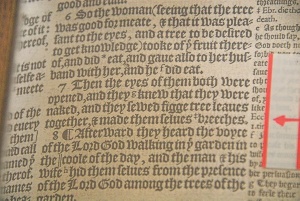 A copy of the 16th century
'Breeches Bible'

At this time a set of carved corbel heads were added to support the roof timbers. One of these carved heads is certainly Henry VII, another is likely that of his wife, Elizabeth of York, who visited the church when it had been remodelled. Two other heads are thought to represent Anne Neville, whose family, the Beauforts, owned Chedworth Manor, and her husband, Richard Beauchamp, Duke of Warwick.

Other features of historical note include the 15th-century pulpit, which was carved from a single block of stone, 14th century piscina, and a copy of a 'Breeches Bible' in a glass case in the north aisle.

This latter is an interesting curiosity. It was a Protestant translation of the Bible, made in about 1557. It acquired its unusual name because of its translation of Genesis 3:7; "Then the eyes of them both were opened, and they knew that they were naked, and they sewed fig tree leaves together, and made themselves breeches." This section of the text has been well signed so that visitors can read it for themselves.

More self catering near Chedworth

More bed and breakfasts near Chedworth

Self Catering near Chedworth