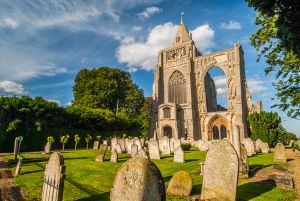 A very attractive village at the border of Lincolnshire and Cambridgeshire, Crowland is famous for its magnificent monastic church, which forms part of the ruins of Croyland Abbey, and for its unique medieval three-sided bridge.

Note the difference in spelling; the town is 'Crowland' and the abbey is 'Croyland'. This difference is probably down to a spelling mistake made by a medieval monk, but the mistake has stuck! The abbey was founded in the 8th century, and much of the superb medieval west front remains standing.

The abbey grew up on an island site in the marshy fenland, around the location of a hermit cell established by a monk named Guthlac. Over time the surrounding fens were drained and a settlement grew up around the abbey, forming the town of Crowland.

The monks of Croyland maintained a historical record of events, spanning the years 655-1486. The record is known as the Croyland Chronicle and forms a valuable resource for historians.

The abbey was dissolved by Henry VIII in the Reformation, and most of the monastic buildings were torn down, but the nave and two side aisles were kept intact to serve as the parish church of Crowland. Look for the carvings over the west doorway, depicting scenes from the life of Guthlac, and a gilded roof boss in the shape of a pagan 'Green Man'.

Aside from the church, there is another major historic site in Crowland; the 14th century Trinity Bridge. The peculiar three-sided bridge was built at the confluence of the rivers Welland and Witham, but the rivers have since changed course leaving the bridge high and dry.

The first record of a bridge here comes from AD 716, but the current stone bridge was built between 1360-1390 of stone from the quarries at Barnack. Three stairways meet at the top of the bridge. On one stair is a carved figure thought to be a depiction of King Ethelbald, brought here from the west front of the nearby abbey. 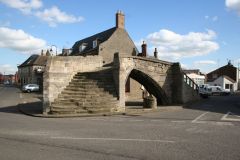 More self catering near Crowland >>

More bed and breakfasts near Crowland >>