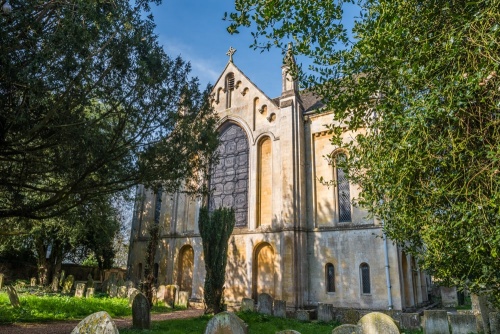 Thorney Abbey from the churchyard

A religious settlement was established at Thorney about AD 662 by Saxulf, who also founded Peterborough, then called Medehamstede. Saxulf's foundation was not a monastery in the traditional sense, but a community of anchorites living an isolated life on what was then no more than an island in the fens.

This patch of high ground in the marshes became known as the 'Island of the Hermits'.

The religious settlements of the Fenland region were devastated by Danish attacks in AD 870, but the monks of Thornton escaped the worst of the Danish depredations and were thus able to help bury their less fortunate fellows at Peterborough.

Another version of the tale says that Thorney was destroyed in the Danish attacks and the island was abandoned and became overgrown with thorn bushes, giving us the name Thorney, or 'island of thorns'. 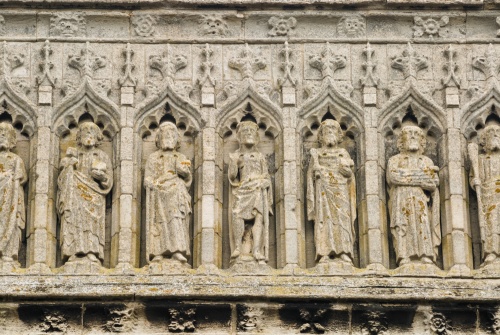 Carved figures on the west front of Thorney Abbey

The abbey was refounded on Benedictine lines in AD 972 by St Aethelwold, Bishop of Winchester from 963-984. Aethelwold had a reputation as a religious reformer, pushing rulers to support monasteries at the expense of secular clergy.

With King Edgar's support, Aethelwold acquired estates across Huntingdonshire to support the new abbey and gave the monks relics of former anchorites and local saints.

He bought the remains of Benedict Bishop, who had founded the monasteries at Jarrow and Wearmouth and acted as tutor to the Venerable Bede. Aethelwold also brought the body of St Botolph from Boston, along with Botolph's brother Adolf, and the relics of Hereferth, Bishop of Winchester, who was killed by the Danes in AD 833. Thereafter, Thorney was known as the Church of St Mary and St Botolph. 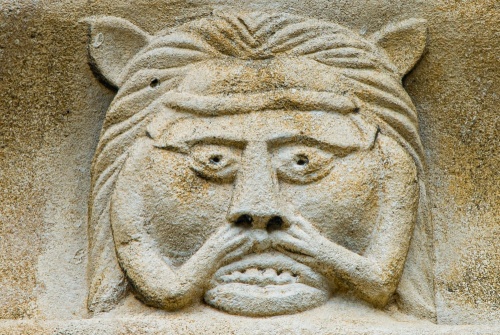 Thorney Abbey benefitted from royal patronage under King Cnut, and even into the Norman period the abbots of Thorney were appointed by the king.

Under the rule of Abbot Gunther (1085-1112) the old Saxon church was pulled down and a larger building in Norman style was begun. That church was not consecrated until 1128.

The abbey was expanded in the early 14th century, but it suffered badly from the Black Death of 1349 when 13 monks and 100 lay members died. In the aftermath of the plague the abbey went into a decline. 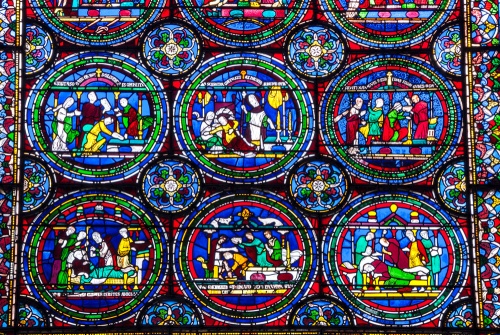 Thorney Abbey was disbanded at the Dissolution of the Monasteries under Henry VIII. The remaining 20 monks were pensioned off, and the abbot was allowed to retire. The abbey was stripped of building materials, much of which went to assist the erection of the chapel at Corpus Christi College at Cambridge University. In 1550 the abbey was sold to John Russell, the Earl of Bedford.

The abbey church was partially spared as the five westernmost bays of the nave were adapted to serve as the parish church. The aisles were pulled down and the arcade arches filled in. 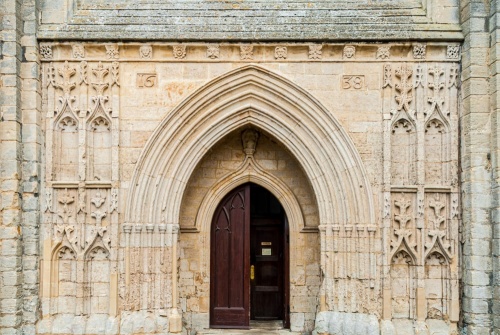 The present east end of the church is the work of Edward Blore and was added in 1840.

The best remaining part of the original abbey church is the superbly carved west front, featuring figures of saints in a horizontal row of niches, plus carved heads of beasts above the arched doorway. Interior highlights include stained glass thought to have been brought here from the London trading base of the Hanseatic League.

Thorney Abbey is very easy to find. It stands on Abbey Place (the B1040) in the centre of Thorney, just south of the crossroads in the middle of the village. It is generally easy to find parking along Abbey Place. 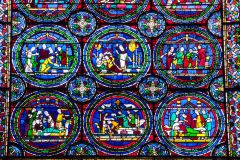 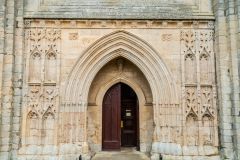 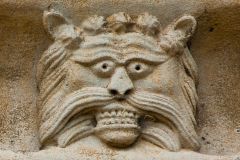 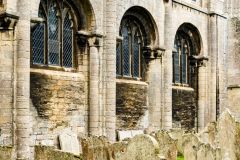 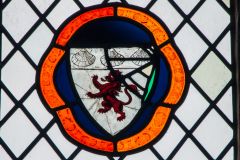 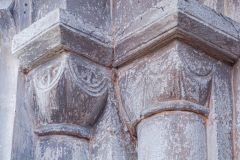 More self catering near Thorney Abbey