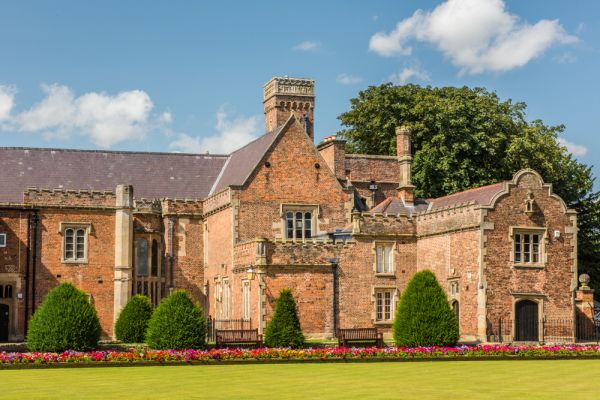 Ayscoughfee Hall is a Grade I listed 15th-century house, built for a wealthy wool merchant around 1450. This area of Lincolnshire was incredibly wealthy during the late medieval period, due to the flourishing wool trade, and Spalding's location at the lowest crossing point of the River Welland made it a major centre for wool transport.

The historic core of the building is a central hall, flanked by two wings and a tower. The Hall is generally attributed to Richard Aldwyn, or Alwyn. Richard's son, Nicholas, rose to become Lord Mayor of London in 1499, and there is an intriguing mention in his will of 'my grete place in Spalding'.

Sometime before 1530 ownership passed to the Ayscough family, who came from Stallingborough, near Grimsby. The name of the Hall appears to be a combination of the family name and the word 'fee', a medieval term for land owned by a knight. This suggests that perhaps the family did not actually own the house, just the land on which it stood.

Whatever the origin of the name, the Ayscoughfee family did not maintain their connection with the Hall for long, and by 1556 they no longer owned either the house or the land. The Hall passed through a number of owners and was slowly extended with the addition of a north wing, south wing, and service wing. 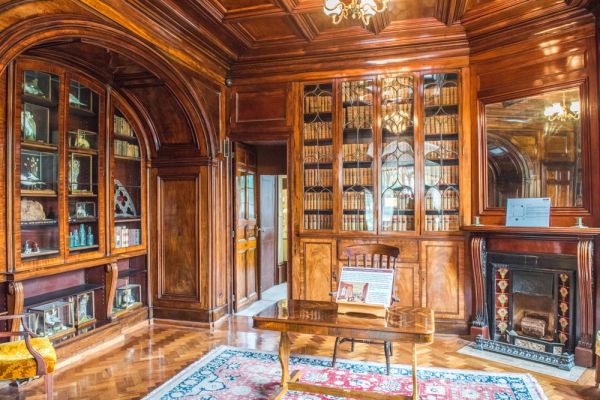 In 1685 Maurice Johnson inherited Ayscoughfee. His son, also named Maurice, is known to history as 'The Antiquary' for his lifelong interest in history and heritage, or 'antiquities' as they were popularly known at that time.

The younger Maurice Johnson served as a lawyer in London, but when he returned to Spalding he formed a Gentleman's Club, later the Spalding Gentleman's Society, whose members met to drink coffee, socialise, and read the latest London publications.

Members of the Society have included such famous names as Isaac Newton, writer Alexander Pope, antiquarian William Stukeley, and poet Alfred, Lord Tennyson. The Society still meets to this day and maintains a library and museum. The collection of curiosities begun by the Society were among the very first examples of a museum in Britain, and some of the collection is on display in the Hall today.

Johnson was probably responsible for laying out the gardens that surround Ayscoughfee Hall, including the numerous yew trees. In 1732 the Society commissioned a local cartographer named John Gundy to prepare a map of Spalding, and Gundy's map shows the Hall and gardens already in their present layout, with kitchen gardens, an orchard, and lake surrounding the house. Johnson also indulged his passion for early stained glass, and some of his collection is incorporated into a large window at the rear of the house. 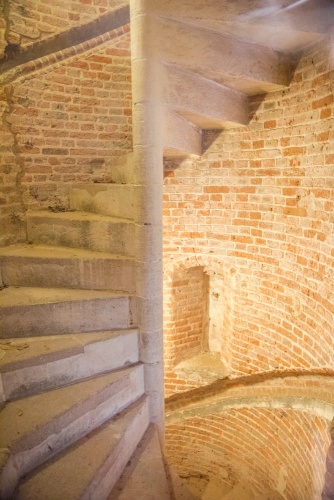 Shortly after 1790 the scientist and explorer Sir Joseph Banks called on artist John Nattes to prepare a series of drawings of Lincolnshire views. There are two works by Nattes showing the Hall as a gabled, H-shaped building, and a steeply-pitched slate roof.

In 1793 the fourth successive Maurice Johnson took possession of Ayscoughfee. This was Reverend Johnson, a clergyman, who was responsible for many of the most visible changes to the medieval building.

Johnson must have considered the medieval decoration outmoded, for he renovated the interiors on elegant Georgian lines, with a plaster ceiling and grand, balconied entrance hall. The front elevation gained new Gothick windows and the front entrance was moved to a central position in keeping with Georgian ideals of symmetry.

Further changes to the Hall took place in the Victorian period when a front porch joined the north and south wings, and the stair turret gained a battlemented facade. 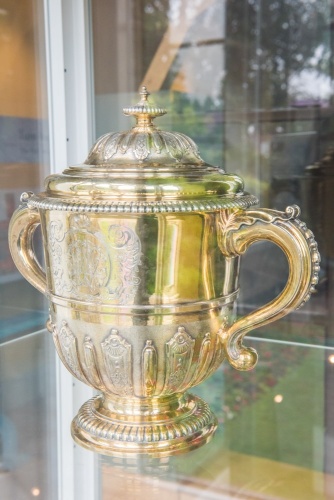 The final Maurice Johnson left Ayscoughfee before 1850 and the Hall was let to a number of tenants. A fascinating advertisement from 1868 is preserved; it offers Ayscoughfee to let at £80 per year, and describes it as 'a picturesque family mansion', with six 'best' rooms, five dressing rooms, five servant's bedrooms, a library, drawing room, dining room, breakfast and billiard rooms.

The final tenant left Ayscoughfee Hall in 1897 and the property was purchased by a local committee as a memorial for Queen Victoria's Diamond Jubilee. The sale price of £2000 was met by public subscription and loans.

It was intended that the hall would eventually serve as a museum, but it was to be another 88 years before the transition to a museum was to take place. The final great change to the property took place in 1922 when a war memorial designed by Sir Edwin Lutyens replaced an earlier Owl Tower. Lutyens was one of the best-known architects in early 20th century Britain, perhaps best remembered today for designing the Cenotaph in Whitehall, London.

In 2003 the Hall was closed for a massive refurbishment project which took almost 8 years to complete and cost in the region of £1 million. One of the benefits of the restoration project was that extensive study of the Hall's medieval architecture was carried out, and in the process, it was found to be one of the best examples of medieval timber-framing in the country.

In 2012 the Hall was awarded Grade I listed status, recognising its national importance. One of the recent discoveries was a brick cross-vaulted staircase. Only five steps of the stair remain, but the ceiling is a wonderful example of 15th-century brickwork. 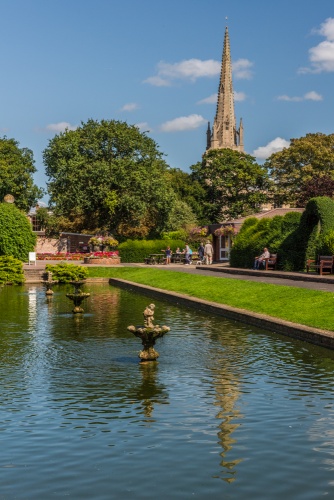 The interior of this wonderful historic building is occupied by the South Holland Museum. The museum focuses on the social history of the region and includes collections of historic photographs, books, clothing, farming equipment and historical documents.

One of the prize exhibits is the Johnson Cup, made in 1712 of silver but gilded with gold. This two-handled cup was made for Theophilus Fairfax Johnson (1790 - 1853), third son of Reverend Maurice Johnson, and is covered with ornate coats of arms of local families connected to the Johnsons.

In addition to the permanent exhibits on the local history of South Holland, there is a special Guest Gallery housing changing exhibits by local artists. There are dress-up clothes for children and plenty of opportunities to handle replica historical objects. 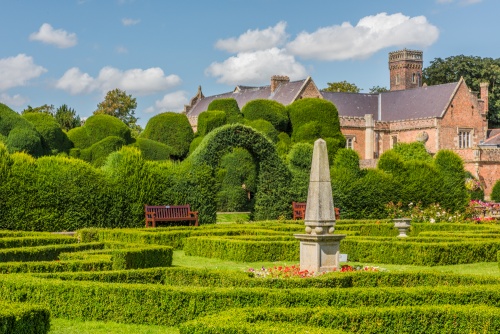 The Hall is set in historic gardens with roots at least as early as 1720. Among the garden features is a Yew Tree Walk, laid out in the 1720s, an ornamental lake the Lutyens war memorial mentioned above, and a historic ice house. A more modern addition to the historic gardens is a Peace Garden, and there is a Herb Garden featuring plants which would have been grown for the inhabitants of the Hall.

Though the focus for most visitors to Ayscoughfee is the museum of local life, the Hall itself is of equal or greater importance. It must rank among the best surviving examples of a medieval timber-framed merchant's house in England. 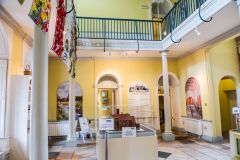 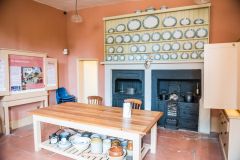 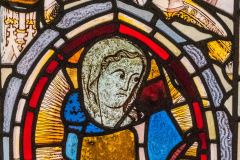 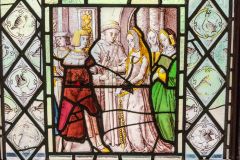 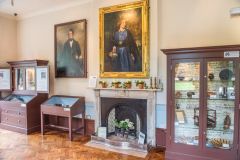 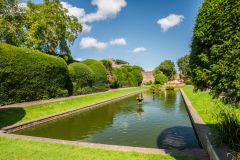 More self catering near Ayscoughfee Hall