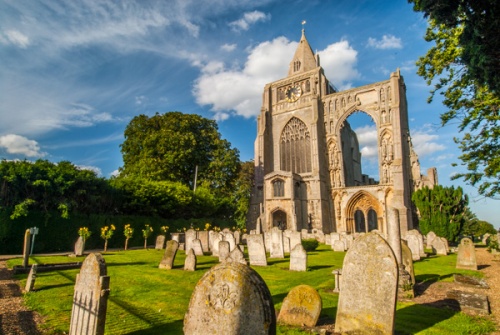 Though the name of the town is 'Crowland', the abbey is properly 'Croyland', the result of a misspelling by a medieval monk. The abbey at Crowland dates to the early 8th century, though its roots go back even further.

Legend tells that the island of Crowland was chosen by St. Guthlac as the site for his hermit's cell. Guthlac was a young man who turned away from the world and sought a life of contemplation.

He arrived at Crowland on St. Bartholomew's Day, 699 AD, and he dedicated his cell to that saint. At that time Crowland was literally an island, rising up out of the fens. It must have been a desolate spot in the 8th century - even the name suggests that; Crowland stems from Old English for "wild land".

Over time the hermit's reputation for holiness grew, and people began to seek him out. Among his supporters was Aethelbald, a claimant to the throne of the kingdom of Mercia.

Guthlac prophesied that Aethelbald would one day gain the throne, and the nobleman swore that if the hermit were proved correct he would found a monastery in Guthlac's honour.

The abbey suffered under the Danish depredations of the following two centuries; in 870 a Danish attack surprised the monks at prayer, the abbot was killed and the buildings burned to the ground. Much of the abbey was restored by Turketyl, abbot in the mid 10th century, but a terrible fire in 1091 destroyed Turketyl's Saxon buildings.

Once more Crowland was rebuilt, this time in Norman style, and again the abbey buildings were destroyed, by an earthquake in 1118 and by a fire in 1143. Surviving parts of that first Norman abbey can be seen in the font and the west arch of the central tower.

The abbey underwent its final destruction in 1539 as part of Henry VIII's Dissolution of the Monasteries. The nave of the abbey church and two side aisles were left standing to serve as the parish church for Crowland. Sadly, only the north aisle now remains.

Despite this destruction, enough remains to give a good sense of the glories that were Crowland; above the west door are quatrefoil carvings depicting scenes from the life of Guthlac, and statues showing saints associated with the abbey. 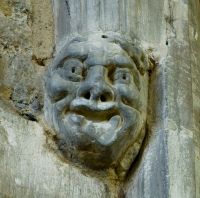 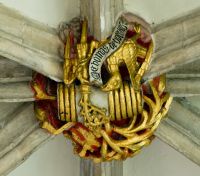 More self catering near Croyland

The Bluebell - 8 miles
Helpston, Cambridgeshire
From: £80.00

More bed and breakfasts near Croyland