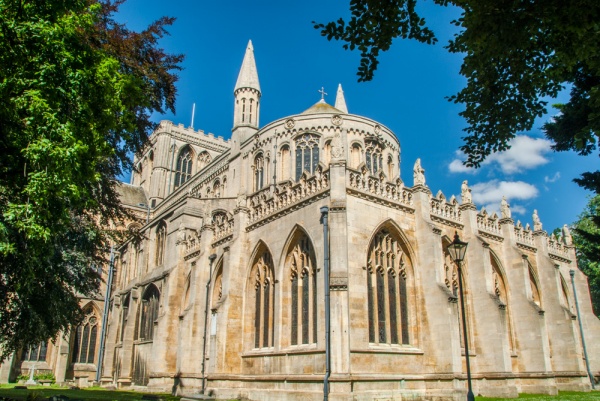 The first monastery here goes back to AD 655 when the royal family of the kingdom of Mercia converted to Christianity. King Peada founded a monastery church here, but that monastery was sacked by the Norse in 870 and rebuilt about 100 years later. The abbey was expanded and rebuilt by Athelwold, Bishop of Winchester, in the mid 10th century.

This late Saxon church survived an attack by Hereward the Wake in 1070 but fell to a servant's carelessness with fire in 1116. The nave, rounded apse, transepts, and chancel were completed by 1175.

When you look at the west front of Peterborough it is hard to shake the impression that the builders weren't quite sure which style to adopt, so they included a bit of everything. Officially called a screen front, there are three enormous Gothic arches topped by triangular gables and side turrets, all of which projects from and masks a simpler deep-set facade.

Some people find the effect jarring, almost grotesque; others regard it as one of the finest works of Gothic architecture in the country. The design is based on the double square, and the proportions of width to height are those of classical music. 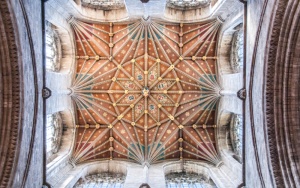 Ornate vaulting in the New Building

Though Peterborough is known for its startling west front there is much more to this marvellous building. Two queens were buried here; the first was Catherine of Aragon (d. 1536). Her memorial lies in the north aisle. Just opposite, on the south side of the chancel, is a memorial commemorating the burial of Mary, Queen of Scots.

The unfortunate Mary was buried here following her execution by Elizabeth I. Mary's body is no longer here, however; when James I came to the throne he had her remains exhumed and reburied in Westminster Abbey. Peterborough Abbey was dissolved by Henry VIII, but rather than destroy the abbey church, Henry made it a cathedral and created a new bishopric based at Peterborough.

The cathedral suffered damage during the Civil War when Cromwell's Parliamentary troops destroyed the stained glass and choir stalls. The current choir stalls are Victorian replacements. The eagle lectern is worth noting; it dates to the late 15th century. In the north aisle is the tomb of Abbot Benedict (d. 1193).

Benedict was responsible for much of the work on the nave and was also responsible for bringing the relics of St Thomas a Becket to Peterborough. Nearby are the inner workings of the old cathedral clock, with parts of it dating to the 15th century. 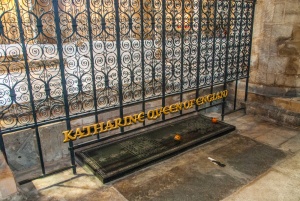 The painted wooden ceiling of the nave is original, built between 1230-50. The most architecturally stunning aspect of the cathedral interior may be the eastern end, called the New Building.

Here the late 15th-century fan vaulting is stunning, one of the finest examples in the country. This is the work of John Wastell, the architect responsible for King's College Chapel at Cambridge University.

Between the New Building and the apse is the Monk's Stone, also known as the Hedda Stone. This beautifully carved block of stone dates to the 8th century and is one of the few bits remaining from the Saxon church on this site. One of the interesting features of the interior is the fan-vaulted retrochoir.

In the south transept are three small chapels. The chapel dedicated to St Oswald contains an unusual watchtower, where a monk would have stood watch over the relic of St Oswald's arm. The arm was lost at the time of the Reformation.

In the cloister is a Saxon well, and the Holy Spirit chapel boasts three medieval misericords, or mercy seats. The font is a lovely 13th-century marble bowl supported on a 19th-century base. It was lost for many years but discovered acting as a flower container in a local garden.

Peterborough Cathedral is often bypassed by tourists in favour of more well-known cathedrals, such as nearby Ely, but Peterborough must be considered one of the most intriguing of medieval buildings.

Though officially the private garden of the Dean of the Cathedral, The Deanery Garden is open to visitors on certain days throughout the summer months. It is a good example of the style known as 'Early Victorian Picturesque', influenced by the writings of prominent Victorian gardeners William Robinson and John Loudon.

Within the garden are the remains of a Norman Castle, built by Toraldus, a follower of William the Conqueror. Toraldus was later appointed Abbot of Peterborough by William. Tickets for the Dean's Garden are available from the Welcomers desk in the Cathedral. 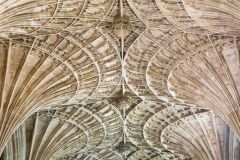 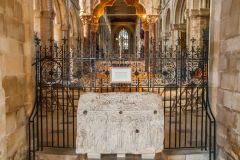 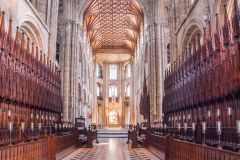 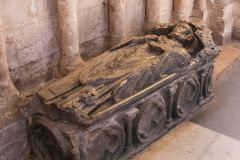 More self catering near Peterborough Cathedral