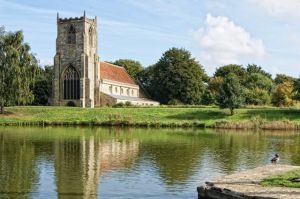 Skirbeck is a small village in southern Lincolnshire, close to Boston. The name means 'clear stream' and at the time of the Domesday Book in 1086, it supported 42 families and a pair of churches.

There was once a priory at Skirbeck, though no trace now remains. In 1220 a hospital dedicated to St Leonard was founded to house 10 poor people, A decade later the Hospital was transferred to the Knights Hospitaller, and they held it throughout the medieval period.

After the Dissolution of the Monasteries, the Hospital passed to the Duke of Suffolk and served as an almshouse. The almshouses stood opposite Hospital Bridge, a site now occupied by bedehouses.

The parish church of St Nicholas stands at some distance from the village, on the bank of the River Witham. It is of Norman origin, with 13th-century work and later Victorian restoration, and boasts an unusual Elizabethan pulpit with carved birds as supports.

Another historic building is Hussey Tower, built by Richard Beynyngton around 1450 as part of a large manor house. Hussey Tower is one of the earliest brick buildings in England, with the building materials made on site from local red clay.

Beynyngton, a wealthy JP and tax collector, was a friend of Ralph, Lord Cromwell, who built Tattershall Castle from brick about the same time. It seems likely that Beynyngton was inspired to emulate the new fashion for brick that Cromwell began, and built his own manor in the same style.

The Tower represents one of the most important surviving medieval tower houses in England. It retains a brick-vaulted ceiling and an octagonal stair turret with a finely crafted handrail of brick. For comparison see a similar staircase in our article on the Moot Hall in Maldon, Essex, and another early brick building, Kirby Muxloe Castle in Leicestershire.

The Tower was later owned by Sir John Hussey. The unfortunate Sir John was executed by Henry VIII in 1545 because he failed to suppress the Lincolnshire Rising, and the tower was sold to the Boston Corporation. It is kept locked to minimise vandalism but is regularly open for heritage open days, and as of this writing, efforts are underway to restore the building.

Skirbeck was home to the last working mill in England to grind woad; the mill only ceased working in 1932.

A different sort of Skirbeck heritage is brought to life by the 'Knights of Skirbeck', a medieval re-enactment society who put on exhibitions of medieval battle and domestic life based around the Wars of the Roses time period. 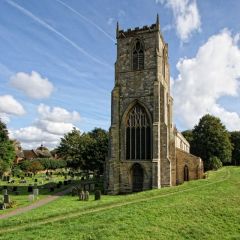 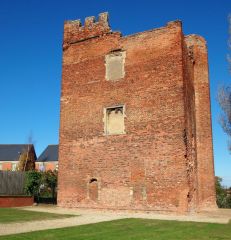 More self catering near Skirbeck >>

More bed and breakfasts near Skirbeck >>