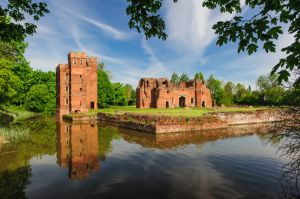 The beautiful remains of a moated 15th-century mansion, left unfinished when its owner was executed for treason. The owner was William, Lord Hastings, who began work on Kirby Muxloe Castle in 1480, creating a fortified house of red brick surrounded by a wide moat.

There was already a 14th-century house on the site, built by the Pakeman family, when Hastings began his castle. Foundations of that first house can be seen within the castle enclosure.

The Hastings family gained ownership of the Kirby Muxloe estate in 1460, and Lord Hastings demolished much of the earlier house in order to use the stone to build his new castle.

Work had only been going on for three years when Lord Hastings was caught up in the transition of power from Edward IV to Richard III. Hastings had been a firm a favourite of Edward, and actually supported Richard's claim to the throne. So it came as some surprise when, in June 1483, Richard had Hastings suddenly seized, charged with treason, and summarily executed. One theory is that Hastings refused to support Richard's plans to kill his young nephews, the so-called Princes in the Tower. 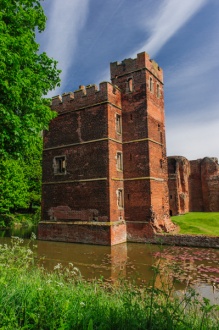 The corner, or angle tower

While we will probably never know the true reasons for Hasting's execution, the effect on Kirby Muxloe Castle was dramatic. Work did not cease immediately, for Lady Hastings continued construction for a brief time, but activity petered out after 1484 and only sporadic work was ever done after that point, and eventually the site was abandoned.

The accounts book for construction still survives, so we know that Lord Hastings spent a total of 1088 pounds constructing Kirby Muxloe. We even know the names of those in charge of construction; the comptroller was Rober Bowler and the master mason was John Cowper.

The castle site is entered by way of an imposing gatehouse, and a strong three-storey tower stands silent watch over the moat. The moat encloses a site 110 metres long and 90 metres wide, while the island upon which the castle stands is 80 metres by 60 metres. The gatehouse and west tower are in red brick dressed with stone, making this one of the first groups of brick buildings in the Midlands. Harder wearing stone is used for both door and window surrounds, however.

Unlike Lord Hastings' other major property of Ashby-de-la-Zouch Castle, Kirby Muxloe was intended for show; to display the owner's wealth and status, and was not primarily a fortification, despite the broad moat and crenellated towers.

The gatehouse is very striking; it is one of the first in England to have gunports for firing at attackers. Several of the gunports are below the waterline, out of sight to modern visitors. What is the point of having gunports underwater?

Presumably, they were intended for use when water levels in the moat were low. There is a large, empty panel over the entrance archway, prepared for Lord Hastings coat of arms, but the carvings were never added before the owner's death led to building work being abandoned. The gatehouse is reached by a drawbridge over the moat, and the gateway passage is further defended by a portcullis and two sets of gates.

The site is a rough oblong, rather than a square plan like Ashby Castle. One part of the castle that was complete is the lovely corner tower, standing three storeys high, with a spiral stair rising to a crenellated parapet walk. The stair is made of brick; one of the earliest and most impressive uses of brick for a staircase in England. For another example of early brickwork see our article on the Guildhall in Maldon, Essex. Each tower room had its own garderobe; an early form of ensuite accommodation!

Quite apart from the historic architecture, Kirby Muxloe is a gorgeous, romantic site, a time capsule of a bygone age. 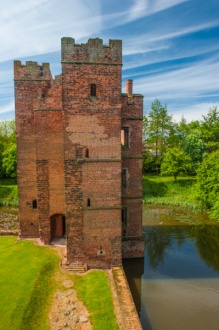 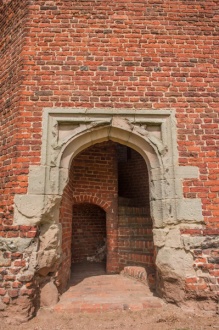 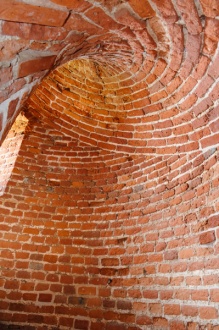 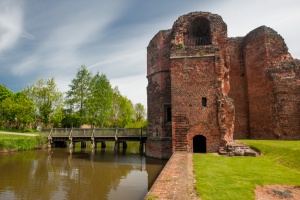 The gatehouse and drawbridge 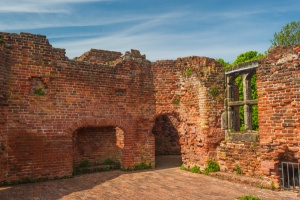 Upper chamber of the gatehouse