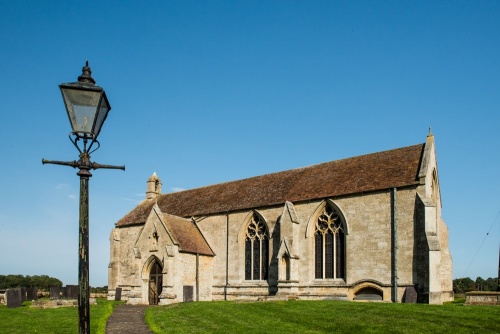 The infant River Slea, known locally as Kyme Eau, flows through the flat Lincolnshire landscape north-east of Sleaford. On the northwestern fringe of South Kyme village it passes the parish church of St Mary and All Saints. In a field opposite the church stands a solitary 14th-century tower, all that remains of a moated manor house built by the powerful Umfraville family.

There was a Saxon church on this site as early as the 8th century. Six fragments of carved Saxon stones featuring knotwork patterns were discovered during church restoration and built into the east end of the north wall. It is entirely possible that these stones came from a Saxon priory.

The Domesday Book of 1086 records a priest at 'Chime' when part of the manor was owned by the Crown and part by a lord named Egbert. Around the year 1100, the manor passed to William de Kyme, and the Kyme family held it for over 200 years.

Sometime before 1156 Phillip de Kyme established an Augustinian monastery on the site of the earlier Saxon priory. Kyme Priory never grew to any great size and was eventually suppressed by Henry VIII in 1539. 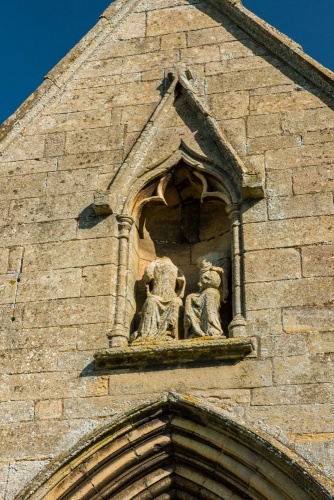 Though the medieval monastery buildings were pulled down and the stone used for other building projects, part of the monastic church survived to become the parish church. What we see today are the west end of the south aisle and a small section of the south end of the nave.

Sadly, the medieval church was restored in 1805 and then completely rebuilt in 1888-90 by Charles Fowler. As a result, the church we see today, though it has ancient origins, has only a few reminders of the medieval monastery.

The oldest part of the church, aside from those fragments of carved Saxon stone, is the south doorway, which features three orders and finely carved capitals. The doorway has ornate cable moulding, a lion-headed corbel at the peak, and a pair of dragon-head stops. There are three other reset medieval capitals inside the church and a medieval grave slab in the south wall.

The church building is a high-sided rectangle without a tower. There is a small bellcote over the west gable. The large south porch as a statue niche over the entrance with a worn statue of the Virgin Mary. This statue is thought to depict the Coronation of the Virgin.

Unfortunately, the church is not always open to visitors. On our last visit, we found it locked, with no obvious information on where to find a keyholder. We've included it in our gazetteer for its historical interest and the fact that it is so close to the neighbouring South Kyme Tower. Taken together, the moated Tower site and the ancient Saxon origins of the church make for a memorable historical site.

Getting there is very easy. You can clearly see South Kyme Tower as you drive along the B1395. Turn west off the B1395 at the north-western edge of the village onto Church Lane. You will quickly come to a free parking area for the church on your right.