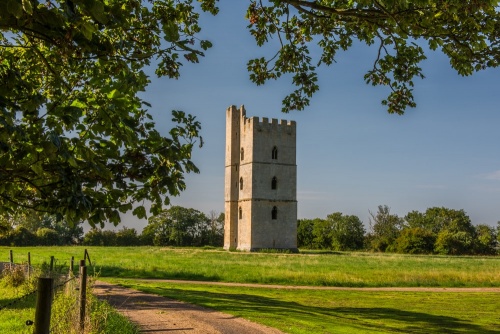 The rural village of South Kyme lies about five miles north-east of Sleaford in the North Kesteven District of Lincolnshire. The B1395 road passes through the village on its way north to join the A153 at North Kyme. As you drive through the village it is impossible to miss a strikingly tall, slender tower standing alone in a field. This medieval tower is all that remains of a fortified medieval manor house built by the Umfraville family.

The story of South Kyme Tower (or, as it is sometimes more simply called, Kyme Tower) can be confusing and you will read different versions of the story online. 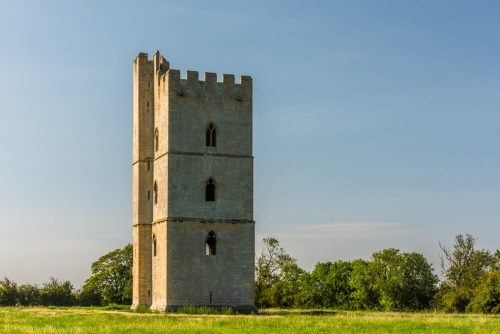 The tower from the north

Kyme Eau runs through the village of South Kyme and forms the south and west boundaries of a roughly triangular moated site. The moat is now dry but is clearly visible as a depression about 10m in width. Sometime in the post-medieval period, the eastern arm of the moat was recut to join up with Kyme Eau.

This may have been the site of a pre-Conquest manor owned by Morcar, Earl of Northumbria. The manor passed to the Crown after the Norman Conquest and was owned by William the Conqueror at the time of the Domesday Book survey in 1086.

The manor passed to William Kyme about AD 1100. The Kyme family may have erected a castle on the site. Some sources suggest that the tower we see today is the last remaining vestige of that early 12th-century castle. 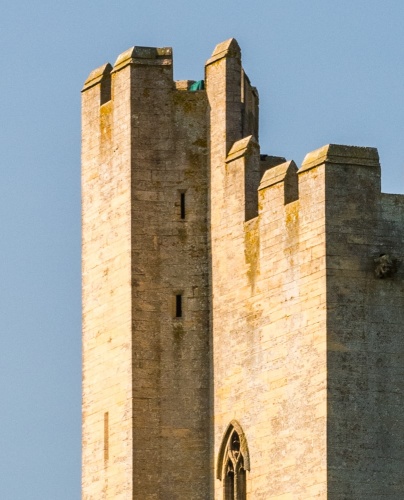 The turret stair and parapets

Sometime around 1169, Phillip de Kyme founded an Augustinian monastery just north of the castle site. The abbey occupied an area of high ground that rose above the surrounding fens. It is possible that Kyme Abbey stood on the site of a much earlier Saxon priory founded in the 7th century. The present church of St Mary and All Angels stands on the same site and incorporates parts of the monastic buildings.

The Kyme family held the estate until it was acquired by the powerful Umfraville family in 1338. The moat may then be much older than the 14th-century fortified manor house built by Gilbert de Umfraville, third Earl of Angus and Lord of Kyme. Near the centre of the moated site stands South Kyme Tower, the only remainder of the Umfraville's manor house.

The tower stands 23m high (77 feet), on a square plan. It was built of Barnack stone (limestone ashlar) and erected around 1340. The tower consists of a vaulted basement storey with the vaulting ribs meeting at a central boss decorated with the arms of Gilbert de Umfraville.

Above this vaulted basement are three upper chambers reached by a turret stair, with an intact spiral stone stair. The first-floor chamber was known as 'the Chequered Chamber' because it had patterned decoration. The tower was built without any fireplaces or garderobes, suggesting that it was intended purely for defence and not for dwelling. 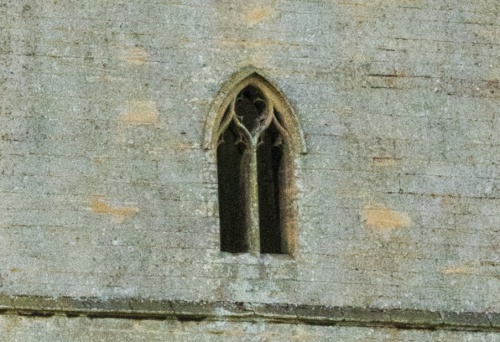 The upper floor still has its window mullions and tracery

The official Historic England description of the site suggests that the tower we see today was just one of four corner towers linked by wings enclosing an inner courtyard.

The Tudor antiquary JohnLeland described South Kyme Tower as a 'goodly house and parke'. Unfortunately, the rest of the Umfraville's manor house was torn down between 1720-1745, leaving just one tower standing. Stone from the manor house was used to build several nearby farmhouses and the chimneys were sold to Thomas Chaplin of Blankney Hall (now demolished).

On the south front you can see the marks where the manor house was attached. The Tower also has intact window mullions on the upper floors. The east, west and north faces of the tower are identical. Beyond the Tower, in the south-east corner of the site, is a clearly visible depression made for a medieval fishpond.

South Kyme Tower is the earliest of several stone towers in this area of Lincolnshire, and the only one built of stone. Late towers like Tattershall, a few miles to the north-east, are made of brick.

South Kyme Tower stands on private land. We've included it in our gazetteer because it is extremely easy to get a good view of the tower from the lane that leads past St Mary and All Saints along the northern edge of the moated site. Please respect the landowner and do not enter the field where the tower stands.

Access couldn't be easier. The Tower stands immediately opposite the parish church on Church Lane, off the B1395 at the northern edge of the village. There is parking at the church and the Tower is clearly visible in the neighbouring field.