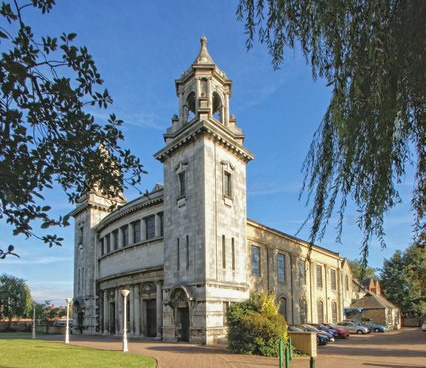 The Lincolnshire market town of Boston is full of fascinating historic buildings, notably St Botolph's parish church, more popularly known as Boston Stump. Though St Botolph's is well worth a visit, there are other fascinating historic churches in Boston, among them the imposing Centenary Methodist Chapel, one of the most impressive non-Conformist chapels in England.

The chapel, often known as Boston Centenary Church, was built in 1839 by Stephen Lewin. The chapel was designed with a Sunday school and a day school from the start. The original school buildings were rebuilt in 1898.

In 1909 the chapel was badly damaged by fire, and had to be rebuilt. The architects were Gordon and Gunter, who gave the chapel its striking frontage of Portland stone, with tall, square towers flanking an unusual curving central section with a colonnade of Doric pillars. So imposing is the chapel front facade that it is known locally as the Methodist Cathedral. 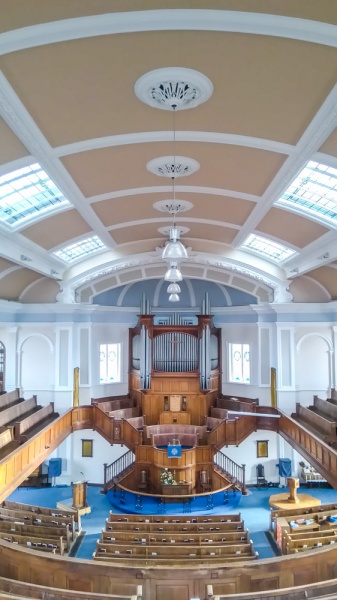 The main body of the church is built of Gault brick, with five bays marked by classical pilasters in brick, and moulded stucco cornices. There are two tiers of stained glass windows in the art nouveau style so popular in the early 20th century.

The interior is huge, seating 1200 worshippers, with space for a choir of 40 singers. All the furnishings date from the 1910 restoration. There are two aisles forming a sweeping curve at the front.

A large gallery occupies the sides and rear of the church, and is supported on delicate Doric columns. The neo-classical theme is echoed with Ionic columns on the gallery level supporting a vaulted ceiling decorated with beautifully detailed cornices in the shape of fruit garlands.

In the centre of the main floor is the elevated pulpit, with a circular panelled front, looking over the wooden font.

One of the highlights inside the church is the organ, built by the Cousans company of Lincoln. This state of the art (for 1913) instrument was driven by a Crossley gas engine providing power to a Cousans turbine, which in turn drove pistons inside the organ vase. If the organist wanted to change the pistons he had to climb inside the organ case and adjust an array of levers and ratchets.

The Centenary Church is a wonderful example of early 20th-century Art Nouveau style, and has been listed Grade II* by Historic England for its heritage interest.

Many thanks to Phillip Richards for the interior photos accompanying this article.

Self Catering near Boston