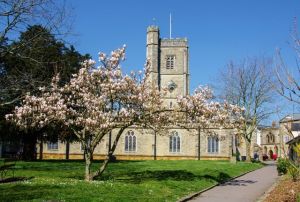 Axminster is set in eastern Devon close to the border with Dorset. The town made its name as a centre for quality carpet making. Thomas Whitty made the first carpets here in 1755, and Axminster has never looked back! You can view carpets being made in the Axminster factory.

The church of St Mary dates to the Saxon era and retains its Norman doorway and a finely carved Jacobean pulpit. The church has its origins in a minster, or mother church for the region, established in AD 786.

Athelstan, the grandson of Alfred the Great, founded a college of priests here around AD 924. A new church was built in the 13th century under the patronage of the De Mohun family, who founded a Cistercian monastery nearby.

There are some lovely Georgian houses in the town centre. The town is set in the Axe river valley, a designated area of Outstanding Natural Beauty, with picturesque villages and pristine countryside. A short distance away is the famed Jurassic Coast of south Dorset.

In 1755 Thomas Whitty made the first carpets at Axminster, using a process similar to traditional Turkish carpet-making techniques. The Axminster carpets were made to the highest possible standard, crafted to order for some of the finest stately homes in Britain. The original carpet manufacturing took place at Caster Hill House, which still stands, though the works have long since moved to more modern premises.

Visitors to the modern works can watch carpets being made by hand, using the same processes that made Axminster a byword for quality in the 18th and 19th centuries.

Though it is carpets that made Axminster famous, the town goes back to at least the Roman period. The first settlement here is thought to date to around AD 300. The location was perfect for the Romans, at the junction of the Fosse Way load leading north to Lincoln, and a coastal road linking Exeter and Dorchester.

The transportation links made Axminster a perfect spot for coach traffic in the 18th century, and the George Hotel stands as a reminder to the days when 16 coaches a day stopped at Axminster to change horses. The town gained a measure of fame in 1805 when it formed part of the Trafalgar Way, the route used by the military to carry dispatches from the Battle of Trafalgar from Falmouth to London.

The town's medieval prosperity was assured when it was granted a market charter in 1210. The weekly cattle market was held in the town square until 1834 before it was moved to Trinity Square. The market was closed permanently in 2006.

Five miles away is Forde Abbey, a beautiful stately home built from the remains of a medieval monastery, and set in award-winning gardens. 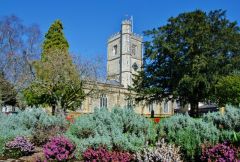 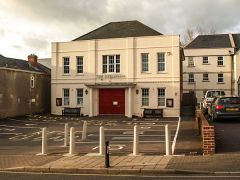 More self catering near Axminster >>

More bed and breakfasts near Axminster >> 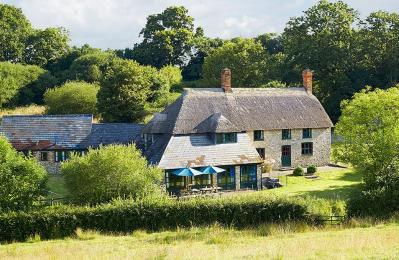 This detached, thatched, former farm is set in a very quiet, rural position, two miles from Axminster. Set in 10 acres of land with views across the Axe Valley, the …
Sleeps 12

This thatched, 17th century, Grade II listed former farmhouse is situated in the peaceful village of Shute between Honiton and Axminster. It has a south-facing garden with fine views. The …
Sleeps 10