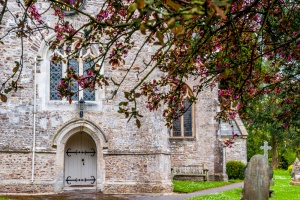 The village of Musbury takes its name from the nearby hill fort, whose name translates loosely from Old English as 'ancient site overrun by mice'. On the slope of the hill below the fort stands the delightful medieval church of St Michael, made famous by its links to the Drake family.

We know there was an early medieval church on the site, for records show a rector named Roger de Hamtone in 1204. The first record of an appointed priest does not come until 1260. The oldest part of the present building is the tower, built around 1420.

The church is built of local flint rubble and freestone, with Beer stone used for quoins, window and door openings. The medieval chancel was restored in 1865 and the north aisle a decade later. as a result, much of the interior is Victoria, with few remaining medieval features.

The highlight of St Michael's is the Drake family memorial, begun in 1611 and enlarged around 1646. The memorial is a beautiful example of 17th century Renaissance style. It is divided into 3 sections, with a pair of kneeling effigies in each section. The left-hand figures represent Sir John Drake (d. 1558) and his wife Amy (d. 1577). 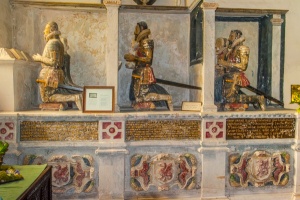 In the centre are Sir Bernard Drake (d. 1586) and his wife Garthrud (d. 1601), while in the right-hand section are effigies of another Sir John Drake (d. 1628) and his wife Dorothy (d. 1631). The figures all look towards the east aisle window, dedicated to Robert Hamlyn Mervyn Drake.

The arrangement of 3 pairs of kneeling couples is extremely rare in English churches. The couples are separated by pilastered screens, and kneel atop a plinth with coats of arms below. The top section of the monument is missing, and it is interesting to imagine what the entire memorial must have looked like when new.

When the memorial was being prepared for restoration in 1926 a stone mensa, or altar stone was found lying on the plinth. The stone, believed to be 14th or 15th century, still showed five consecration crosses.

The Drake's arrived in the Musbury area in 1415, when John Drake of Exmouth purchased the manor of Ashe, 1 mile away. His descendants held the estate until 1793. A discredited story says that John Churchill, later to become the 1st Duke of Marlborough, was born at Ashe. Churchill was the son of Elizabeth, granddaughter of Sir John and Lady Drake. He was baptised by Matthew Drake, rector of Musbury and a distant relative, at a private chapel attached to one of the Drake's three houses in the parish. 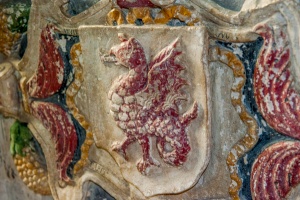 Coat of arms on the Drake memorial

Behind the high altar is a Venetian marble reredos, given to the church by Sir William Drake of Oaklands in Surrey, in 1874. The east window commemorates WF Lethbridge and his wife Susannah. Lethbridge served as Flag Lieutenant under Admiral Nelson aboard the HMS Foudroyant, and after his retirement from the Navy he purchased and restored Mountfield House in Musbury.

Another interesting historic feature is a richly carved parish chest, immediately beside the Drake memorial. There is no date that I could see, but the style seems to be 17th century. In the north aisle is a very faded royal coat of arms. On the west wall of the south aisle is an unusual mural in memory of John Anning, made of both marble and wood. Set against the wall is a slate memorial to Thomas Warren (d. 1686).

I loved visiting Musbury's church, and the Drake memorial is a delight. I especially enjoyed the painted and gilded coats of arms at the base of the monument and the intricately detailed costumes of the effigies. 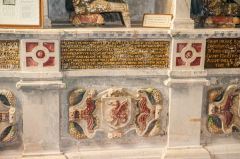 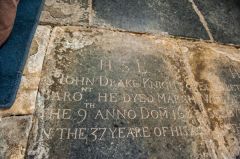 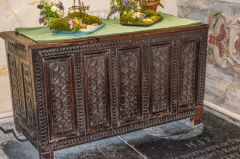 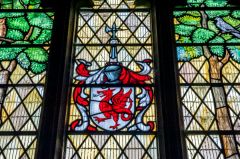