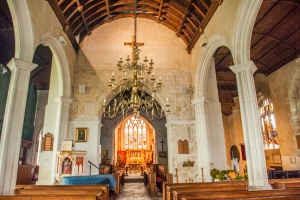 St Andrew's Church, Colyton
There was a succession of Saxon churches at Colyton beginning around the year 700 AD. Sometime around AD 744 a timber church was built to act as a minster, or mother church of the region. In the late 12th century a Norman church was built of stone, on a cruciform layout with a central tower. Over the medieval period, the chancel was lengthened, the nave raised, side aisles added, and a magnificent west window added.

The west window is the largest of any English parish church, and it truly is an impressive sight. Lighting the nave are a pair of elegant brass chandeliers, installed in 1769.

The most interesting historic feature of St Andrew's is its collection of monuments. Most of the best are in the Pole Chapel, but the most fascinating memorial is on the north side of the chancel. This is the Courtenay Monument, named for Margaret Courtenay, granddaughter of Edward IV through his daughter Catherine.

According to tradition, Margaret Courtenay choked to death on a fish bone. However, the church guide suggests that the tomb is in fact that of Margaret Beaufort, the granddaughter of John of Gaunt. 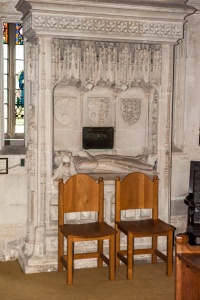 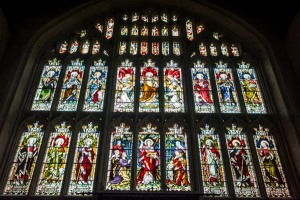 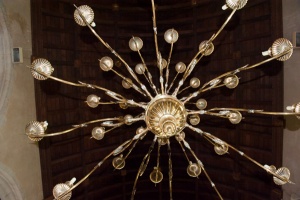 18th-century chandelier in the nave
The Courtenay Monument separates the chancel from the Lady Chapel, once the private chapel of the Yonge family, who lived at Great House in nearby South Street. The chapel is reached through a Jacobean stone screen, bearing the Yonge coat of arms.
Much more impressive is the Pole Chapel on the south side of the chancel. This has a wonderful stone screen, much more elaborate than the Yonge screen, built by Thomas Brerewood, vicar of Colyton 1522-44. Brerewood also built the vicarage, which is one of the oldest in England still used for its original purpose.

Within the Pole Chapel are a wonderful collection of historic tombs, many in Renaissance style, to the Poles of Shute. The earliest dates to 1587.

In the south transept is a display case with several interesting old books, including a 'Vinegar Bible'. However, the transept is dominated by a large Saxon cross of Beer stone. This dates to the 10th century and has been described as the finest Pre-Conquest sculpture in Devon.

The cross stood in the churchyard for centuries, but it was broken up when the Norman church was built, and pieces were incorporated into the tower. The fragments were only rediscovered after a fire in 1933 and were reassembled and bought inside the church. The carving is worn, but beautifully done, with traditional interlace pattern down the sides of the cross shaft. 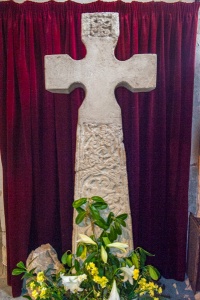 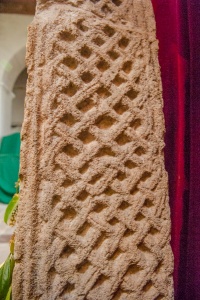 Interlace carving on the
side of the cross 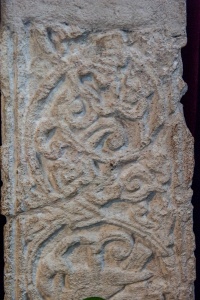 Carving on the front of
the cross shaft

Colyton church is among the most enjoyable parish churches I've ever visited; its so full of historic interest, from the Elizabethan memorials to the Saxon cross; almost every time period for the last thousand years is well represented. I enjoyed my visit thoroughly and can highly recommend Colyton. 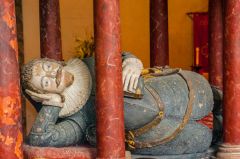 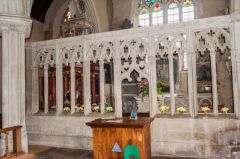 More self catering near Colyton

More bed and breakfasts near Colyton

Self Catering near Colyton