Buckland in the Moor, Devon 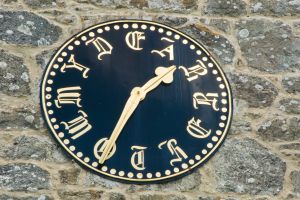 Buckland in the Moor

Buckland in the Moor is a very attractive Dartmoor village. The parish church at Buckland is famous for its unusual clock face. The clock does not have numbers to indicate the hours, but letters which spell out the words 'My Dear Mother'. Above the village on Buckland Beacon are the Ten Commandment Stones, two large tablets inscribed with the words of the Ten Commandments.

The village is one of the prettiest in Dartmoor, with 'chocolate box' thatched cottages and a wonderfully picturesque setting. The village was mentioned in the Domesday Book of 1086 as 'Bochelande', and the name probably comes from the words 'book land'; that is, land held by charter.

The estate passed to Torre Abbey in the 13th century, and later formed part of the manor of Stoke in Teignhead. It became a separate manor by 1578, and in 1614 it was purchased by the Bastard family. The Bastards held the manor for the next 300 years and built neighbouring Buckland Court as their family seat.

St Peter's church stands on a rise of ground at the north-west end of the village, beside Buckland Court. The first church here was built in the 13th century, but the present building dates to the late 15th or early 16th century. It boasts a beautifully carved Norman font and a vividly painted 14th-century screen.

In front of the altar is the tomb of Ralph Woodley, lord of the manor in 1593. There is a very good wagon roof, an 18th-century wooden pulpit, and a coat of arms to George II dated 1745. Under the tower arch are a series of medieval glazed tiles.

But of course, the most famous feature is the striking clock face. Like the village's other famous oddity, the Ten Commandment Stones, the clock face was the work of the Lord of Buckland Manor, William Whitely. In 1931 Whitely had the clock built as a memorial to his mother, who had died shortly before. At the same time, he gave a ring of 3 bells. The clock chimes 'All things bright and beautiful' every quarter hour.

At the bottom of the churchyard stands a delightful thatched vestry; the only one in England still in use.

William Whitley, Lord of the manor at Buckland, was a traditionalist, and a religious man. In 1927 a proposal came before the House of Commons to do revise the Book of Common Prayer by replacing the Ten Commandments given to Moses with Jesus' Two Commandments. The proposal was rejected, and to celebrate Whitley hired a stonemason named WA Clements to carve a pair of granite slabs atop Buckland Beacon with the full text of the Ten Commandments.

The exacting work took Clements 5 weeks, during which time he lived in a cow shed by a nearby wood, and received a single loaf of bread per week.

The first stone bears the text of the first 4 Commandments, plus the dates December 15th 1927 - June 14th 1928, when the Bill received Parliamentary readings. There are also 5 lines of a favourite quote of Mr Whitely's. The second stone has the last 6 Commandments, plus one more; the '11th Commandment' is a verse from John 13 v34 that says ''A new commandment I give unto you, that ye love one another.'

That is followed by a verse from the hymn 'Oh God Our Help in Ages Past'. It seems that the original Ten Commandments did not fill the entire space on the second slab, so Whitely and Clements between them had to come up with something to full in the space.

It is not surprising that Clements gained the nickname 'Moses' for his work, though he later claimed with tongue in cheek that unlike Moses he did not have to carry the slabs down from the top of the mountain.

The stones are quite easy to find, though an Ordnance Survey map will help. A footpath from the Cold East Cross parking area at grid reference SX740742 leads to the top of the Beacon and the stones are in a wonderful position offering fantastic views over the village below. 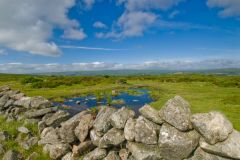 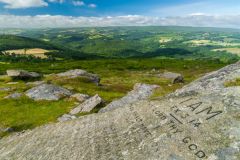 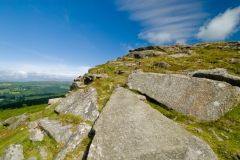 Nearest Accommodation to Buckland in the Moor:

More self catering near Buckland in the Moor >>

More Hotels near Buckland in the Moor >>

More bed and breakfasts near Buckland in the Moor >>