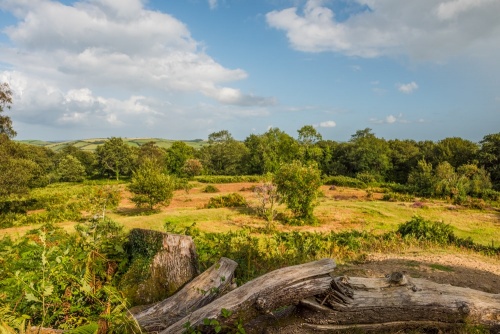 Within the National Trust's Hembury Woods on the fringe of Dartmoor is not one, but two historic sites; an Iron Age hill fort and the Norman motte that was later built within a corner of the Iron Age fortification. It seems appropriate that thee are two castles at Hembury as the name translates as 'high castle'.

The hillfort was built sometime between 500 BC and AD 50. It consists of an inner bank defended by an outer ditch and bank. There was one entrance, in the south-east of the double ramparts. An archaeological survey revealed the outlines of five circular platforms within the earthworks. These are thought to have been round houses.

The hillfort's location near the River Dart suggests that it may have been built for storing and trading tin. The river would have given the inhabitants of Hembury good access to the sea, an essential for trading tin ore. 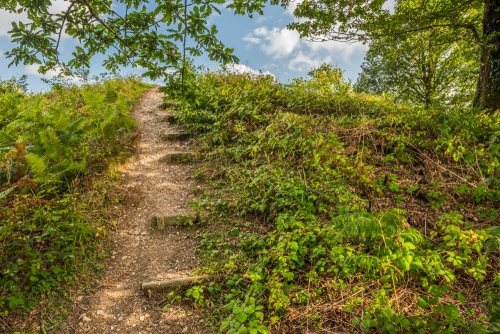 The hillfort encloses an area of 3ha (7 acres) and is 300m across at its widest point. The only entrance is a causeway in the south-east rampart measuring 8m (26 feet) wide.

The hillfort has never been excavated, but it seems logical to assume that the ramparts would have been made with an earthen core possibly reinforced by stone rubble in places. There would have been a timber palisade on the top of the inner bank.

Sling stones have been found at Hembury, suggesting that it may have been subject to an attack. Roman remains have been discovered nearby, so it is certainly possible that the Romans attacked Hembury, though no record exists of such an attack. 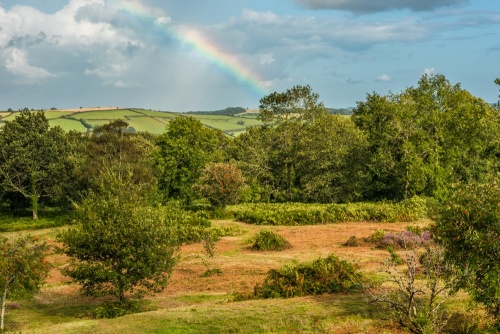 The hillfort was abandoned in the middle of the 1st century. For over a thousand years the site stood empty. Then around AD 1070, the new Norman overlords of England built a motte and bailey castle within the Iron Age walls. They chose an area near the western rampart, which they reinforced.

The Norman fortification consisted of a high earthen mound, called a motte. This was topped by a timber tower in a small hollow, or depression in the top of the mound. At the base of the motte was a semi-circular bailey, or enclosure.

Historians cannot be certain when the motte and bailey castle was constructed. Estimates range from shortly after the Norman Conquest to the reign of King Stephen (circa 1150). Nor do we know when it was abandoned, but it does seem that it was only in use for a very short time. 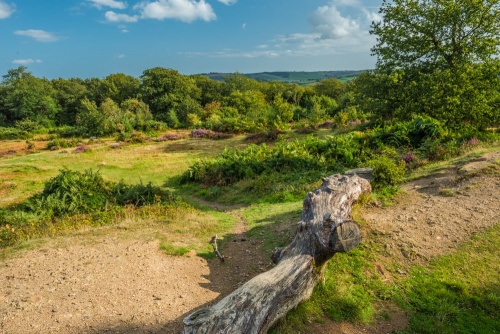 The view from the Norman motte

Hembury Woods is a Site of Special Scientific Interest (SSSI) and a Special Area of Conservation (SAC). It is considered an ancient woodland, meaning it has been continuously forested since at least 1600. It is an important habitat for fritillary butterflies, with five different species flourishing here. It also has a large population of dormice.

According to a local legend, Hembury was the focus of a Viking attack during the Dark Ages. Viking warriors sailed up the River Dart and attacked the fort. They drove off the defending warriors and strengthened the defences.

They also captured the female inhabitants (or, in another version, the women allowed themselves to be captured and raped). When the Viking warriors fell asleep the women slit their throats and opened the hillfort's gates. Their menfolk overran the hillfort and slew all the remaining Vikings. From that day, Hembury was known locally as 'The Danish Camp'. 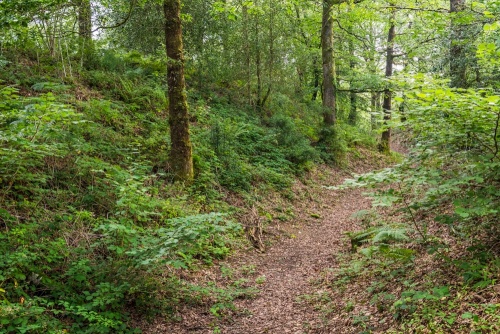 The hillfort bank and ditch

The only problem with that story is that as far as historians can tell, Hembury Fort was abandoned in the 1st century AD, so there would have been no inhabitants. 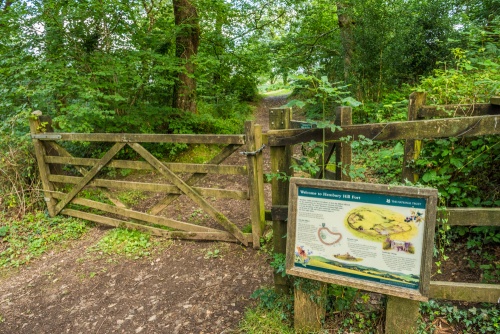 Hembury Wood is on the southern fringe of Dartmoor near Buckfastleigh village. A minor road leads from Buckfastleigh to Holne, crossing the River Dart and rising up to Holne Woods.

There are two National Trust parking areas, one to the north of the castle (SX724687) and once to the south (SX730679). Neither parking area is well-signposted, so an OS map is extremely useful! We use the OS Explorer OL28 Dartmoor map.

The northern parking area provides the best access to the castle, which is a level 5-minute walk from the car park. Be aware that the woodland can be muddy in places, so good waterproof footwear is always advisable.

There are numerous footpaths through Hembury Woods and along the west bank of the River Dart. Look for signposts labelled 'Fort' and 'River'.

The castle and hillfort are open at any reasonable time.