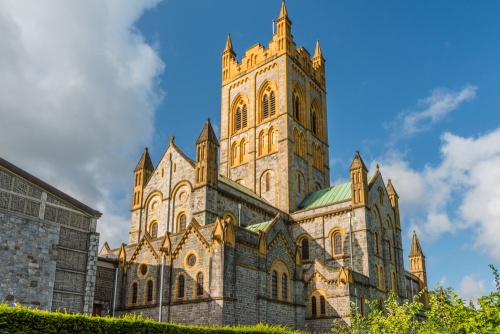 Buckfast Abbey is a modern Benedictine monastery in a peaceful setting on the verge of Dartmoor. A Saxon monastery stood here as early as 1018. In 1147 the monastery became Cistercian, and the entire abbey was rebuilt in stone. After the Dissolution of the Monasteries in 1539, the abbey property was sold and the abbey left to decay, but in 1882 Buckfast was reestablished as a Benedictine monastery, and as such it has flourished. Buckland is famous for keeping bees and producing its own brand of honey and Buckfast Tonic Wine.

A Saxon monastery stood here as early as 1018, during the reign of Cnut. Compared to other Benedictine monasteries it was small, supporting perhaps 50 monks. Only a fragment of reused stone from the Saxon buildings has been found; even the exact whereabouts of the Saxon monastery is uncertain.

In 1137 King Stephen granted Buckfast to the Abbey of Savigny, and a delegation of monks from France crossed came to England to oversee the transition of Buckfast to the Savignac order. However, the new order was not to last long, and in 1147 the monastery became Cistercian.

Under the Cistercian rule, the entire abbey was rebuilt in stone, following a traditional pattern used at other Cistercian monasteries throughout Britain. Of the 12th century buildings, only the west cloister undercroft and the north gateway arch survive intact. 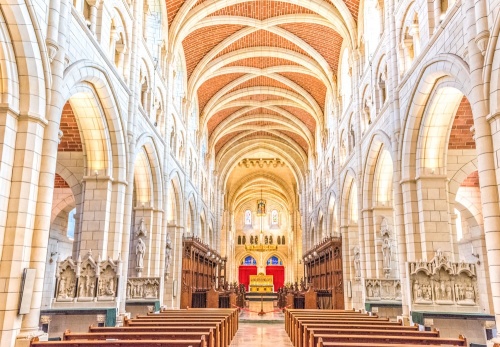 Inside the Abbey church

The monastery was probably at the peak of its prosperity in the 13th century. Along with other Cistercian monasteries, Buckfast raised sheep and exported wool abroad. Finds of fine floor tiles and Purbeck marble columns hint at the wealth enjoyed during the height of the medieval wool trade.

Like so many other places in England, Buckfast suffered from the devastation of the Black Death. Buildings decayed and fell down, even the almshouse beside the south gate was converted to use as a stable. 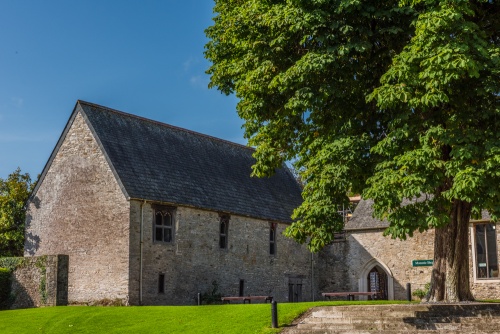 The abbey entered another period of relative prosperity in the 15th century, offering hospitality to guests at a purpose-built guesthouse, and reopening the almshouses. The abbey ran a school, and supported fairs and markets to encourage trade.

From this period comes the south wing of the guest hall, and the Abbot's Tower, a series of three linked rooms next to the west range. Each room is furnished with its own fireplace, suggesting it was used to house important guests or pensioners.

After the Dissolution of the Monasteries in 1539, the abbey estate was sold and the monastic buildings were left to decay. In 1793 the site was cleared by Samuel Berry to make way for a new mansion house. Only the Abbot's Tower and the 12th-century undercroft were left untouched, and the rest of the buildings were razed. 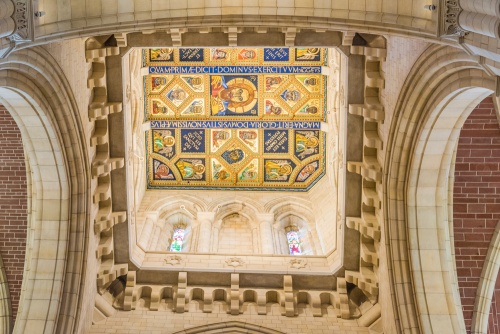 Then in 1882 Buckfast was reestablished as a Benedictine monastery, and rebuilt in 12th-century style, based on a combination of old drawings and study of the Cistercian abbeys at Fountains and Kirkstall in Yorkshire. The result is a Victorian version of a 12th-century monastery, partly built atop the original foundations and incorporating part of the medieval structure.

Buckland is famous for keeping bees and producing its own brand of honey and Buckfast Tonic Wine. The abbey church is open outside of worship times, and there are attractive gardens, including a sensory garden, lavender gardens, and even a small area of poisonous plants, some that were used in the medieval period for medical purposes.

Most people come to Buckfast to visit the Abbey Church, and with good reason; it is an exceptional example of early 20th-century architecture. The church was begun in 1907 and completed in 1932 on the foundations of the original medieval Cistercian church.

Most of the construction work was carried out by a small group of monks under the direction of another monk who was trained as a master mason. Work was begun with just five pounds in funds, using a horse and cart donated by a friendly neighbour.

Construction took place continuously, even during the First World War, when the monks, most of whom were German, were not allowed to leave the abbey except by special license. 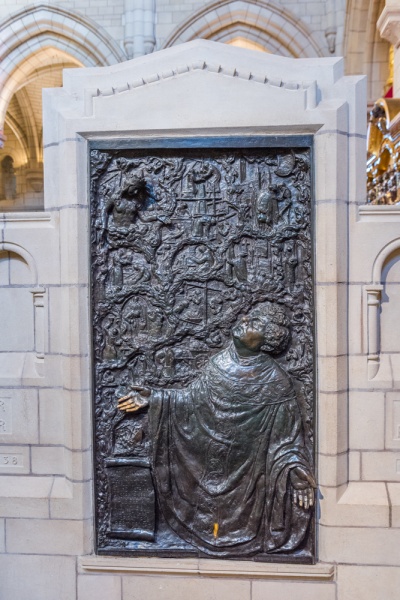 The result is a triumph, with lavish furnishings, painted decoration, tiled floors and Romanesque metalwork of the highest quality.

The church features an outstanding collection of richly coloured stained glass, in Victorian Gothic style. Look for the memorial to Abot Anscar Vonier, who survived a shipwreck to become abbot in 1906.

In 1965 the Blessed Sacrament Chapel was added to act as a setting for a stunning stained glass window by Father Charles Norris, one of the abbey monks.

One of the Abbey's treasures is a 16th-century ivory crucifix given by the Clifford family of nearby Ugbrooke Park, one of the leading Catholic families of Devon. 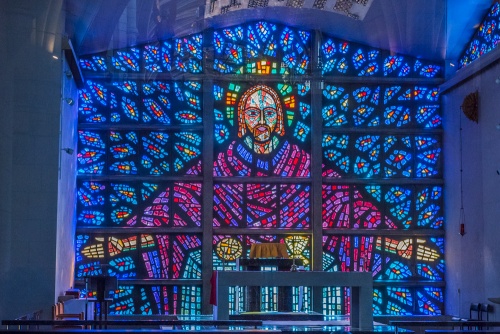 There are three main garden areas at Buckfast, each offering something different; the Sensory Garden, Lavender Garden, and Physic Garden.

The Sensory Garden is based on traditional medieval designs for pleasure gardens. It is laid out around a fountain that feeds into a pair of small streams. The garden is meant to stimulate the senses of sight, smell, sound and touch. Water trickles from an old cider press and flows through beds of sweet-smelling flowers. A chamomile seat circles the fountain, with white roses and honeysuckle adding their scent. 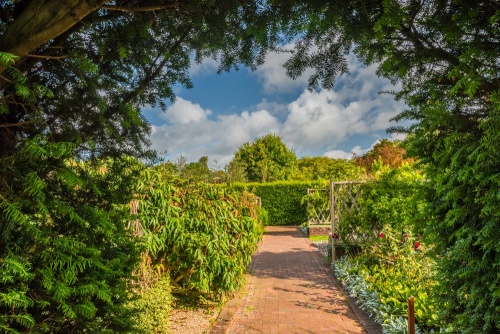 The Lavender Garden is, as its name suggests, based around beds of lavender. Over 150 varieties of lavender grow here. The plants are shaped into rounded domes and are planted to show the remarkable variety of size, shape, and colour of the lavender genus.

The final garden area, and the closest to the abbey church, is the Physic Garden, planted with over 200 varieties of plants commonly grown by the medieval monks at Buckfast. The Physic Garden is divided into four areas, medicinal, culinary, household, and poisonous.

One of the remaining buildings from the medieval monastery is the Abbey's Guest Hall. After the Dissolution of the Monasteries, the Guest Hall was used by a local farmer and later split into several cottages. The Hall has been restored using timber from the Abbey's own woodland. South of the Guest Hall is the restored Southgate, one of two medieval entrances to e Abbey precinct.

Inspired by the design of the medieval gatehouse at Beaulieu in Hampshire, this area of the grounds includes an information centre, gift shop and toilets. Though built in 1984, the gateway was built with a timber frame and limestone walls to blend in with the abbey's original medieval buildings. 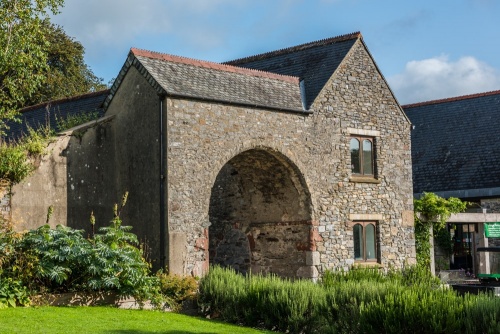 Just inside the Westgate is a Methodist Chapel, built in 1881. It might seem odd to see a Methodist chapel in the grounds of a Catholic monastery, but the reason is simple. The Chapel was built the year before the monks returned to Buckfast. When the monks returned, they left the Chapel intact, as it was in regular use by the local community - as it still is today.

During the medieval period Buckfast had strong links to Tavistock Abbey, located 23 miles away across the moors. A modern long-distance footpath known as the Abbot's Way retraces the traditional route over the moors between the two abbeys. The route starts (or ends) in the abbey precinct. Look for a low granite cross on a pedestal. An annual walk takes place along the Abbot's Way on the first Sunday in October.

Buckfast Abey is an absolute delight to visit. The abbey church is sublime; it is easily one of the finest examples of early 20th-century architecture in Britain. The gardens provide an oasis of calm in a wonderfully peaceful setting. The Abbey is very well signposted from nearby roads and is well worth the effort to visit. Highly recommended. 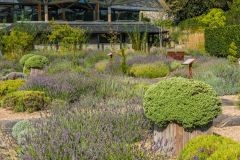 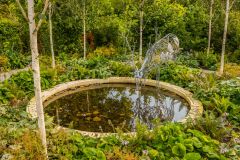 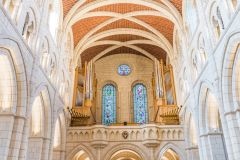 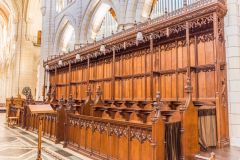 More self catering near Buckfast Abbey >>