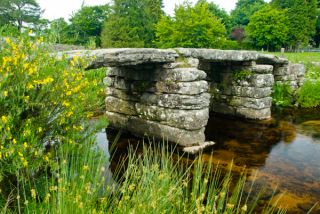 One of the most popular destinations in Dartmoor National Park, Postbridge is famous for its old medieval clapper bridge, one of the best-preserved (and certainly one of the easiest to reach) clapper bridge on Dartmoor.

The first written record of a clapper bridge here dates from 1655, but the bridge was definitely built sometime in the medieval period, possibly the 12th century. It is composed of three large granite piers supporting four massive slabs, with a total span of over 42 feet.

The slabs were probably brought from Bellever, 1.5 miles away, or possibly from Lower White Tor, 2 miles distant. Either way, it was a serious undertaking to quarry, then transport the huge slabs.

The bridge crosses the East Dart, a tributary of the River Dart, and was built so that packhorses could carry tin to Tavistock. You can still walk across the bridge, and it is remarkably sturdy for what seems like such a simple structure.

The bridge is one of the most photographed on Dartmoor, and though perhaps not as picturesque as some others, it is so easy to access that the tour buses keep bringing more visitors to the village!

The large stone slabs are locally called posts, and this is how the village of Postbridge got its name. Apparently, a farmer in the mid-19th century decided to tip one of the slabs into the river bed, thinking it would land on its side and create a dam that would form a pool for a duck pond.

Unfortunately, the slab landed flat in the water and farmer's plans were foiled. The bridge was restored in 1879 and the fallen slab restored to its original position.

Immediately beside the clapper bridge is a second bridge, built in the 1780s to replace the medieval bridge and take traffic between Moretonhampstead and Tavistock. Both bridges are now listed structures, preserved for their heritage value.

Opposite the clapper bridge is the village store and post office. There is a Dartmoor National Park information centre, a pub, and a scattering of houses. The information centre has a display area with prehistoric tools, pottery, and weapons from the Postbridge area.

Several of the items are replicas, such as a Bronze Age Trevisker Ware cooking vessel, and a dagger discovered at Hameldon, but these do help bring home the wealth of prehistoric remains to be found in the area.

Postbridge is also a starting point for many of the most popular walking trails on Dartmoor, with good access to several nearby Bronze Age sites. 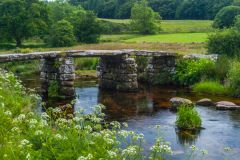 About Postbridge
Address: Postbridge, Dartmoor, Devon, England
Attraction Type: Village
Location: On the B3212 about 3 miles (5km) east of Two Bridges. There is a large car park on the north side of the road.
Location map
OS: SX656795
Photo Credit: David Ross and Britain Express

More self catering near Postbridge >>

More bed and breakfasts near Postbridge >> 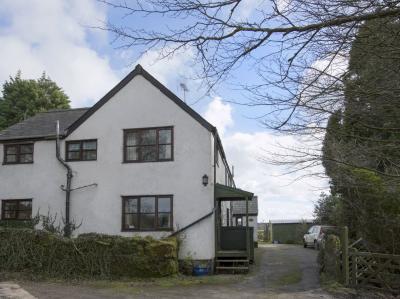 This peaceful Dartmoor cottage is situated 1/2 mile from the Devon village of Postbridge and can sleep four people in two bedrooms.
Sleeps 4