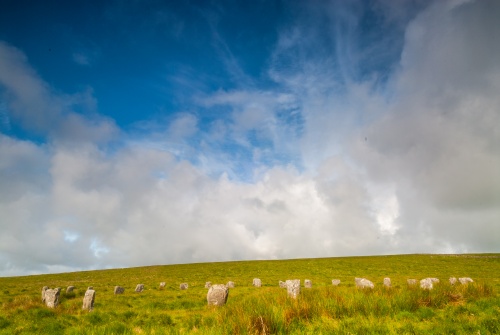 Grey Wethers Stone Circles (sometimes combined into one word as Greywethers) are a pair of Bronze Age monuments in open moorland north of Postbridge, under the shadow of Sittaford Tor. This is the only example of a double stone circle on Dartmoor and it stands at the highest altitude.

The stone circles form part of a large group of prehistoric monuments that also include three round cairns, two ring cairns, and an oval enclosure that may be a form of henge. Together these eight ancient sites have been declared a Scheduled Ancient Monument by Historic England. 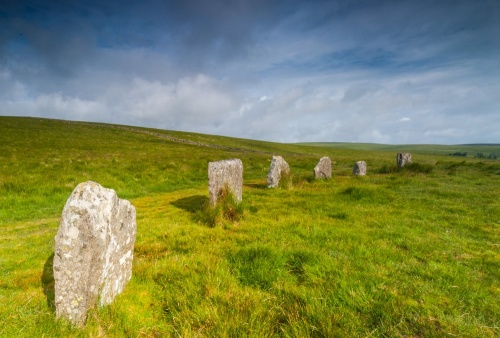 The presence of so many prehistoric monuments so close to one another strongly suggests that the Grey Wethers are was a site of ritual significance for the Bronze Age inhabitants of the moor. It is possible that the monuments were placed here because three rivers have their headwaters on the moor.

The two stone circles were erected just 4.5m apart (15 feet) and are very similar to each other. The northern circle is 31.5m across (103 feet) and composed of 20 standing stones.

The southern circle is 33m across (108 feet) and includes 29 standing stones. The height of the 29 southern stones varies more than the northern circle, with the lowest at 1m high (3.3 feet) and the tallest at 1.4m (4.6 feet). All the stones are of local granite. 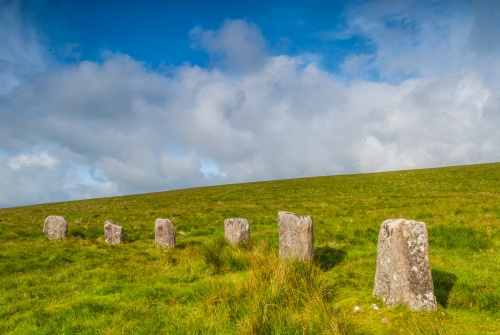 The site was excavated in the late 19th century and a layer of charcoal was found at the original ground level. Unfortunately, the circles were 'restored' in 1909. Several stones were re-erected in the wrong places. You can tell which stones have been re-erected because they use small packing stones at their base for stability.

The name 'Grey Wethers' is said to have evolved because from a distance the circles look like flocks of sheep grazing. Wethers is a local term for a sheep. 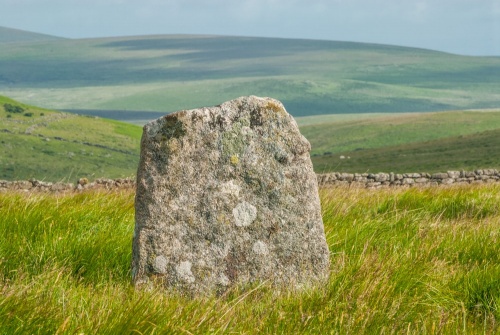 Like so many ancient places on Dartmoor, myths cluster around Grey Wethers. One old story says that a stranger drinking at the Warren House Inn near Postbridge was convinced that there was a herd of fine quality sheep for sale.

Befuddled by drink, he accompanied the locals through a dense fog to Grey wethers. There through the fog, he saw what he thought was a fine flock of sheep. He agreed to buy them, but when he returned in daylight to collect his new flock he discovered only the silent grey standing stones.

Another legend says that on Midsummer Eve the stones all turn to sheep. If anyone can sheer one of the sheep before the sun rises, and sprinkle the fleece with water gathered from a basin on top of Kestor, the fleece will turn to gold. 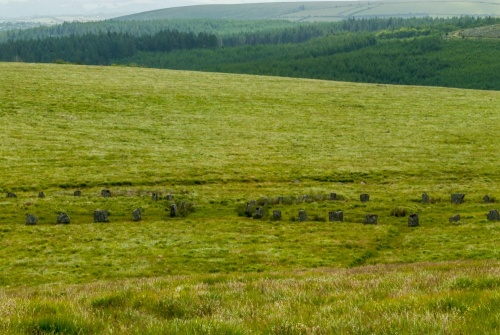 Looking down on the two stone circles

Reaching the Grey Wethers Stone Circles is straightforward, but not easy. Park at the Fernworthy Forest parking area, off a minor road south-west of Chagford. Follow the road through the forest until it turns into a signposted trail. The trail heads west, passing a cairn, a small stone row and several hut circles before it exits the forest onto the moors.

Very shortly after leaving the forest, the trail turns south. You carry on for another kilometre across the moors until Grey Wethers comes into view. It isn't a terribly interesting route, but it is well worth it to see the double stone circle. It is over 6km (3.5 miles) to the stone circles, plus an equal distance back again.

You can also reach Grey Wethers by following a footpath north from Postbridge. The footpath follows the east bank of the East Dart River before heading straight north towards the stone circles and Fernworthy Forest.

Whichever way you come, I strongly suggest wearing good waterproof footwear. This is Dartmoor, after all!