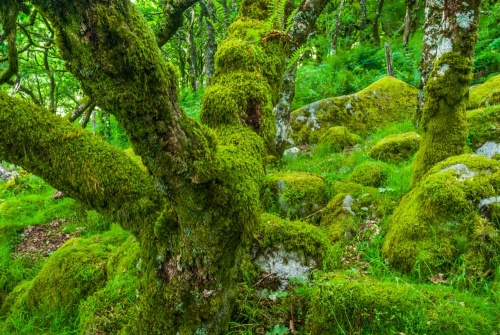 Wistman's Wood is an ancient forest of dwarf oak trees in the valley of the West Dart River just north of Two Bridges, Dartmoor. It is one of the highest oak woodlands in the UK, at 380-410m altitude. The woodland is a Site of Special Scientific Interest (SSSI) and forms part of a national nature reserve.

Quite apart from its importance as an outstanding natural environment, Wistman's Wood is famous for its bizarrely shaped, twisted, gnarled trees, covered in layers of moss and lichens and standing amidst a tumbled area of granite boulders.

The result is otherworldly, like something out of a dark fantasy world. The oak branches are contorted, warped, and tangled. They stretch out horizontally, rather than vertically. 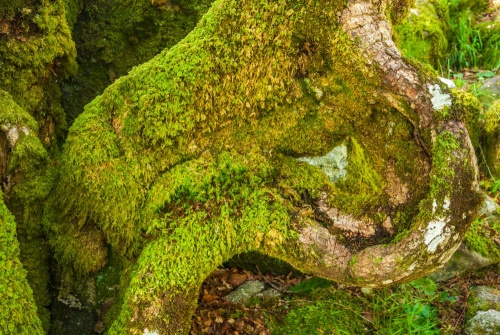 The bizarre shape of the trees has drawn visitors to Wistman's Wood for centuries. Back in 1797, a local cleric wrote that 'It is hardly possible to conceive anything of the sort so grotesque as this wood appears'.

The tangled branches form an almost impenetrable barrier, which explains why Dartmoor ponies did not graze here, allowing the woodland to grow unaltered.

The woodland includes more than just oak. There are mountain ash and hollies, and woodrush and bilberry provide ground cover. 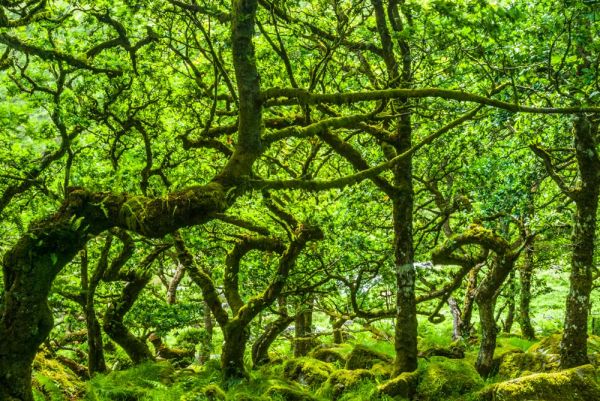 A tangled web of tree branches and roots

The woods covers about 3ha (7.4 acres), though the National Nature Reserve that encompasses the woodlands stretches to 170ha (420 acres) and includes areas of upland heath. The heath provides a home for a large number of moorland birds.

As for the forest itself, it supports over 100 species of lichens. The most striking species is bearded lichen (usnea), which can grow up to half a metre long. The 'old man's beard' droops from the tree branches like, well, an old man's beard, adding to the aura of mystery in the woodland.

This is Dartmoor, so it will come as no surprise that myths cling to Wistman's Wood. The forest is said to have been planted by druids. That helps explain the name, which may derive from 'wise man's wood'. Another, darker, tale says that devil hounds dwell in the trees.

The hounds take the form of huge black dogs known as Wisht Hounds, with blood-red eyes. They emerge at night to roam the moors, searching for any humans foolish enough to be out after dark. They are sometimes led by the Devil and sometimes by an ancient Dartmoor spirit known as Old Crockern, who lives on the summit of nearby Crockern Tor. 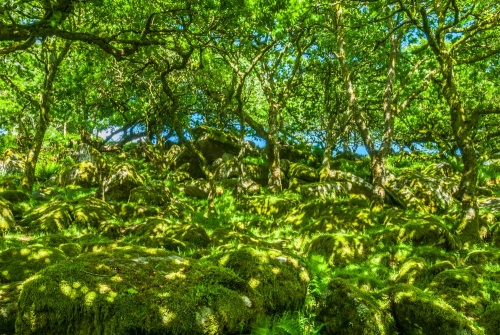 The trees are so dense they block the sun

And if all that doesn't put you off, consider the tradition that the scattered boulders hide a large population of adders ready to prey on unwary visitors.

Let me add a note of reassurance; we didn't see any adders, hounds, devils, or druids on our visit.

A large stone in the woods is known as The Druid's Stone and is said to be the centrepiece of druidic rituals. The stone is inscribed with the following words, 'By permission of H. R. H. the Prince of Wales, Wentworth Buller, on September 16th 1866, cut down a tree near this spot; it measured nine inches in diameter, and appeared to be about one hundred and sixty-eight years old'. 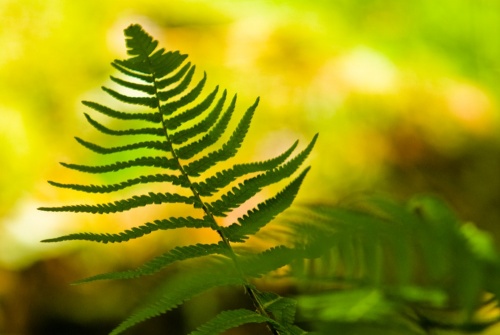 Ferns grow amid the tangle of trees

Access to Wistman's Wood is easy. There is a parking area opposite the Two Bridges Hotel, on the north side of the B3357. From the parking area, a trail leads along the West Dart River to the woodland, a distance of roughly 1.5km (1 mile). The going is relatively easy, though good waterproof footwear is always advisable.

You can also opt for a longer circular trail that loops east to include Crockern Tor and the ancient gathering place of the Stannary Parliament - the administrative gathering of the four stannary towns of Plympton, Chagford, Tavistock and Ashburton.

This is Dartmoor, and the weather can change abruptly and without warning, so be prepared - and don't forget to bring your camera!

More self catering near Wistman's Wood