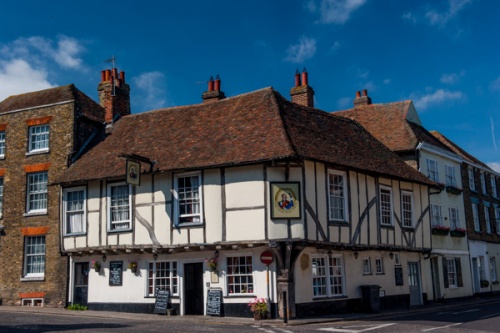 Sandwich, Kent
The tourist brochure published by the local town council calls Sandwich 'The Most Complete Medieval Town in England'. While there may be other worthy contenders for that title, I'd agree that this lovely old market town in south eastern Kent is one of the prettiest and most enjoyable historic towns in the south-east of England. 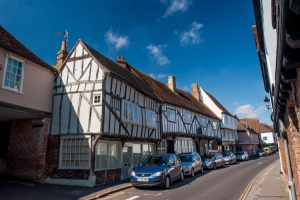 On the outskirts of Sandwich is Richborough Roman Fort, which may have been the site of the first-century Roman landing in Britain. In the medieval period, Sandwich was one of the Cinque Ports, a league of influential seaside towns on the east and south coasts.

Today, Sandwich is one of the best-preserved medieval towns in Britain. There are at least 6 inns that date to the 16th century; some much older! St Clement's church is 12th century, with a fine Norman tower and a collection of beautifully carved grotesques, as well as a section of a medieval tiled floor.

There are two sets of ancient medieval almshouses; St Barts Hospital was built as a hostelry for pilgrims and dates to 1190, while St Thomas's Hospital is a 14th-century building. The church of St Peter still rings a curfew bell each evening. This used to be the signal that householders were allowed to put their animals outside for the night; for that reason, it was called the Pigbell. 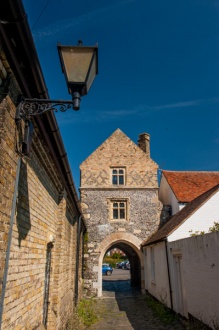 Church Street. The parish church, founded in the Saxon period, and famed for its beautifully decorated Norman tower. Mayoral elections were held here until 1683, and any mayor refusing the honour could (legally) have his house burned down. There are medieval floor tiles in St Margaret's Chapel.

Strand Street. There was a nunnery on this site in Saxon times, but in the Norman period it was replaced by the attractive church we see today, with its wide nave and timber tower. The church was burned during French raids in 1217 and again in 1457, and today it is in the care of the Churches Conservation Trust.

Located just off the market, this beautiful medieval church is now redundant, however, the evening curfew bell is still rung from its bell tower every day. 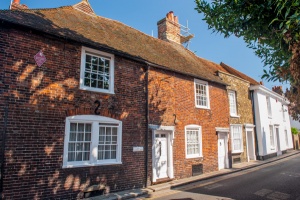 On the Dover Road. This historic group of buildings was established in 1190 as a hostel for pilgrims on their way to Canterbury. Never attached to the Church, it served a lay community from the start; a fact which spared it from destruction at the Dissolution of the Monasteries.

The hostel was built outside the town walls, as travellers needed permission from the Freemen of Sandwich to stay in the town. St Bart's is one of the oldest hostels in England. It was originally composed of one large building, with separate quarters for travellers and residents of the community.

In 1217 a sea battle off Sandwich resulted in a victory over the French. With the spoils of victory, a new chapel was erected, and dedicated to St Bartholomew as the battle took place on his feast day. Surrounding the chapel were 16 cottages reserved for residents of Sandwich only.

Even today residents are required to have lived in Sandwich for at least 20 years. The chapel was rebuilt by Sir Gilbert Scott in 1880 and is set within a compound of cottages, each bearing a nameplate of the resident. A traditional 'Bun Run' event is held each August 24, when local children run around the chapel and are awarded a bun in remembrance of the meal offered to medieval pilgrims. 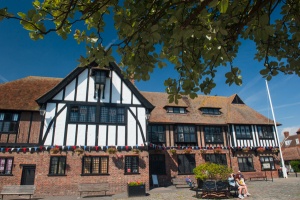 At the eastern end of Strand Street, this attractive building dates to about 1400AD and may be the best-preserved historic house in Sandwich. Henry VIII stayed here, and [we suspect] so did his daughter Elizabeth I in 1572.

On Market Street, near St Peter's church. So named because it was used by refugee Dutch weavers who came here during the religious upheavals of the 16th century.

Giving access to the historic quay, this gatehouse was erected in 1384, restored by the Cooper's guild in 1560 and again in 1955. Pass under the gateway and stroll up the cobbled lane to the Old Custom House, an attractive brick building used to control shipping in an out of Sandwich quay.

The Barbican and Toll Gate

Just off the historic quay is the main bridge across Sandwich Haven. King Canute granted the monks of Christchurch, Canterbury the right to operate a ferry here and charge a toll; a practice that only ended in 1977. 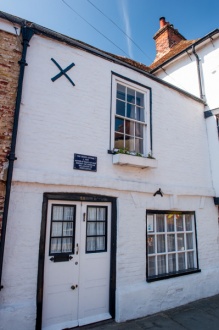 The main thoroughfare into Sandwich from the west, this street may boast more timber-framed buildings than any other street in England. Most of these medieval and Jacobean houses are still inhabited.

Built in 1359, this attractive timber-framed building houses the local tourist information centre and a local heritage museum. It was in this building that the 4th Earl of Sandwich famously invented our modern sandwich. The Earl was gambling here in 1762, and rather than interrupt his gaming to eat, he asked for meat to be brought to him between two pieces of bread.

On the ground floor is an exact replica of the very first Guildhall, which was located beside St Peter's church. It has a very unusual folding jury box which can be collapsed and hidden behind panelling when not in use. There is a 13th-century carved screen, on which are The Queen's Beasts, a dragon and lion carved to celebrate the visit to Sandwich of Queen Elizabeth I in 1572.

A stained glass window depicts the visit and shows the Lord Mayor welcoming the queen, dressed in a scarlet robe. At all other times the mayor wears a black robe; a tradition dating back to 1457, when the mayor was killed in a French raid. The Guildhall is open for arranged tours, and among other historic treasures, you can see the 12th-century Moot Horn used to call townsfolk to gather, and a Mayor's chair dating to 1561.

At the end of Loop Street, on the banks of the Butts Stream, this is the site of St Thomas Hospital, an almshouse dedicated to St Thomas Becket. 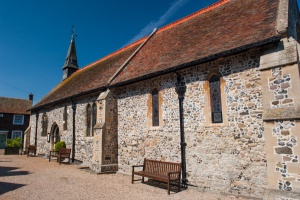 At the western edge of town off Strand Street, this area was used for archery practice in the medieval period. Henry V's archers honed their skills here before setting sail to France and their famous victory at Agincourt.

New Street. Around 1759 this simple whitewashed cottage was home to Thomas Paine, author of The Rights of Man, whose writings inspired the American Declaration of Independence. Paine, a native of Thetford, was married in Sandwich, but his wife died within a year, after which he sailed across the Atlantic to America. The cottage is now a bed and breakfast.

I visited Sandwich on a beautiful summer day when the sky was blue enough to hurt your eyes, so my memory of the town's attractions may be vividly coloured by the wonderful weather, but honestly, Sandwich is a wonderful historic town. around every corner are historic buildings, some falling into decay but most still in good condition, making a stroll around the lanes and alleys a constantly surprising and engaging experience. I loved it! 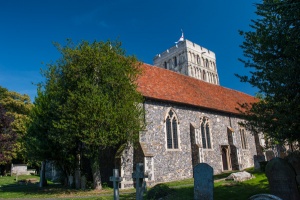 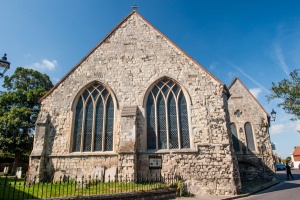 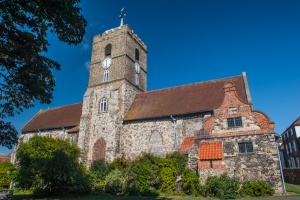 More self catering near Sandwich >>

More bed and breakfasts near Sandwich >> 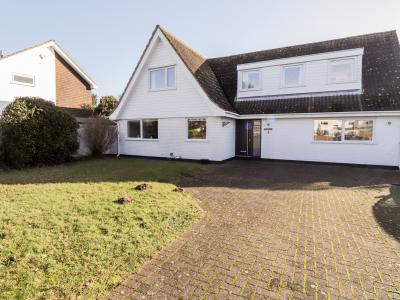