Cley next the Sea, Norfolk 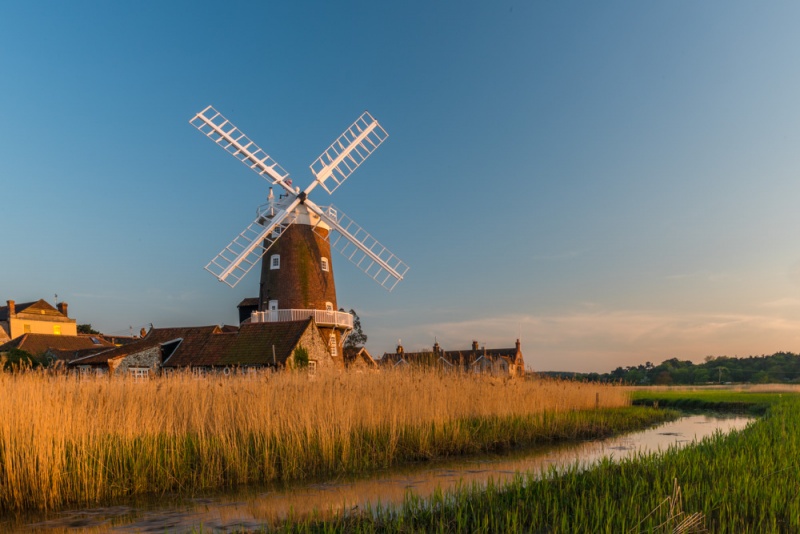 Cley-next-the-Sea is a popular village near Blakeney on the north Norfolk Coast. Cley is best known for its picturesque 18th-century windmill, which looks out across salt marshes towards the sea. The windmill is now a bed and breakfast, so only the exterior can usually be viewed. 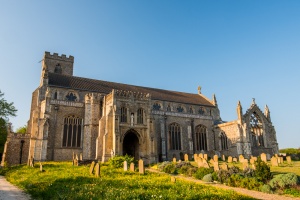 The mill stands 5 storeys high with a stage at second-floor level. It is topped by a domed cap and gallery connected to an 8-bladed fantail. The fantail originally turned the cap into the wind but the cap is now fixed in place. There are four double-patent sails spanning 76 feet. The sails originally supplied power to 2 pairs of millstones, but by 1876 a third pair was added.

Cley mill was built in the early years of the 19th century. We do not know the exact year, but it was not shown on a 1797 map published by William Faden. The first record of the mill is an advertisement in the Norfolk Chronicle in 1819 when it was mentioned as 'newly erected'. It was then owned by the Farthing family, who retained ownership until 1875.

When the last Farthing owner died the miller, Stephen Burroughes, purchased it, and the Burroughes family kept the mill until 1921. Mrs Sarah Wilson bought the mill in 1921 and converted it into a holiday home. All the milling machinery was taken out, and the old mill wheels were used as decoration. Over the following decades, the mill has been restored several times, notably in 1986 when the sails and fantail were rebuilt.

Though the mill is a B&B the owners often allow visitors to climb to the top for wonderful views over the salt marshes.

The mill looks out over marshes that provide habitat for a wide variety of seabirds, making Cley a busy spot for bird watchers who come to visit the NWT Cley Marshes Nature Reserve. The North Norfolk Coast Path leads through Cley towards Holme next the Sea, providing wonderful walking along the coast. 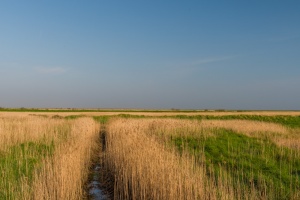 It may be hard to imagine it today, but Cley was once a busy port, with sailing ships transporting goods to Hull and London. In the 17th century, the coastal marshes were reclaimed from the sea, and the port gradually diminished and was lost. The River Glaven, once a hub of activity, silted up, and today it is a tidal waterway, dried up an unnavigable at times, and the area around the river banks is an expanse of reeds and saltwater pools.

A high shingle bank keeps the sea at bay. Between the village and the sea is a mixture of freshwater marshland and salt marshes, with walking trails on the higher ground. This area creates a unique environment for bird and plant life. Cley was named the very first nature reserve in England. The idea launched at Cley proved so successful that soon there were over 2,000 nature reserves and almost 50 wildlife trusts.

A walk over the marshes brings you to a shingle beach. There is a visitor centre for the nature reserve located at the eastern edge of the village, on the A149. There is also a free visitor car park off The Fairstead.

The parish church of St Margaret of Antioch is a superb building dating to the 13th century, with an imposing Perpendicular south porch and a lovely Seven Sacrament font. The church stands on a rise of ground above the wide village green, some way inland from the coast. The south porch roof shows a wonderful mix of roof bosses, including one of a woman chasing a fox that seems to have captured a chicken. There are superb bench ends, carved with figures like a mermaid and strange faces. 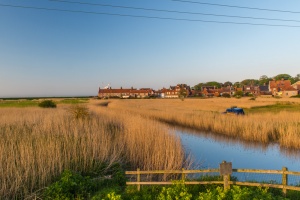 As you walk around Cley you'll see a lovely mix of Georgian and Flemish buildings. The Flemish influence dates to the medieval period when Norfolk weavers had strong trade links to the Low Countries.

Next to the church is a popular pub called The Three Swallows (they serve a very good pint of cider on a hot summer day), and another pub, The George, stands in the village centre, near the mill.

I've visited Cley on numerous occasions - usually to photograph the mill at sunset. Standing beside the River Glaven, watching the golden light of evening hit the mill is an unforgettable sight, and in my opinion is one of the best views in Norfolk. Cley is one of the most picturesque villages in the county, and well worth a visit. 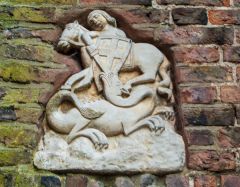 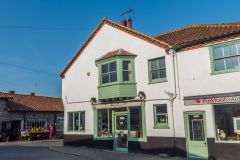 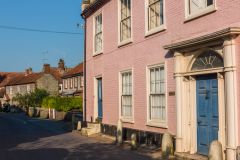 Nearest Accommodation to Cley next the Sea:

More self catering near Cley next the Sea >>

More Hotels near Cley next the Sea >>

More bed and breakfasts near Cley next the Sea >>